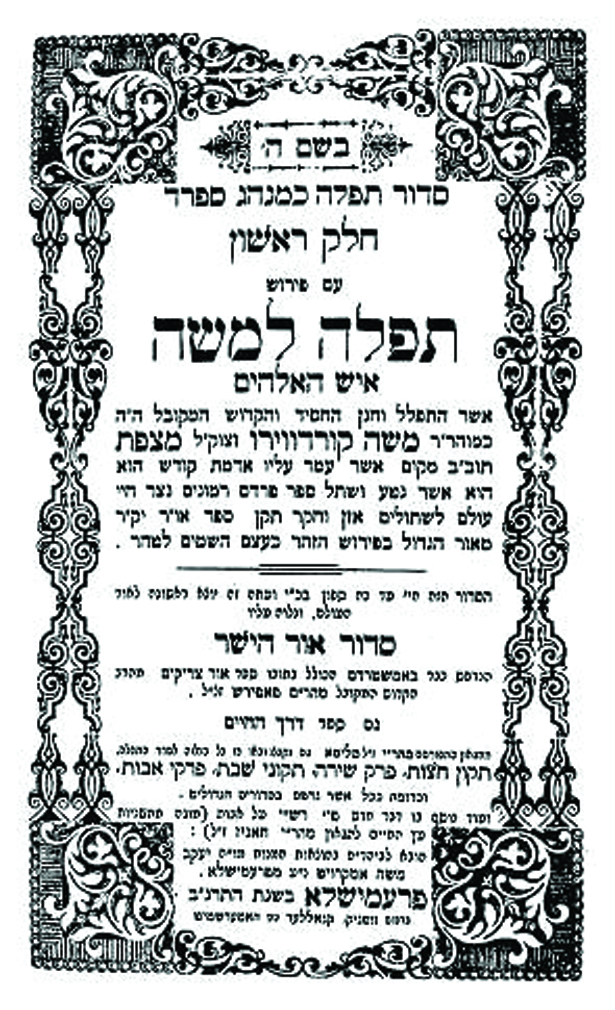 In 4859/1099, the Crusaders captured Yerushalayim from the Muslims.

In 5615/1855, Harav Avraham Yaakov of Sadigura, zt”l (the son of Harav Yisrael of Ruzhin, zt”l), was released from prison. He celebrated that day as a Yom Tov.

Harav Moshe ben Harav Yaakov Cordovero was born in 5282/1522. His birthplace is unknown, but the name Cordovero indicates that his family may have originated in Cordoba, Spain, and perhaps fled from there during the expulsion of 1492 during the Spanish Inquisition.

The Ramak was either born in, or moved soon after to, Tzfas, the city that was soon to become famed as a center of Kabbalah and mystical creativity.

He learned under Harav Yosef Karo, the Beis Yosef.

The Ramak quickly gained a reputation as an extraordinary genius and a prolific writer. He received semichah from Harav Yaakov Berav.

According to his own testimony in the introduction to Pardes Rimonim, at the age of 20, he heard a bas kol urging him to learn Kabbalah with his brother-in-law, Harav Shlomo Alkabetz, composer of Lechah Dodi.

The Ramak not only mastered the text, but decided to organize the Kabbalistic themes and present them in an organized fashion. This led to the composition of his first sefer, Pardes Rimonim, which established his reputation as a brilliant Kabbalist and a lucid thinker.

His second work — a magnum opus titled Or Yakar — was a 16-volume commentary on the Kabbalistic literature in its entirety and a work to which the Ramak had devoted most of his life. Some parts of Or Yakar have been published under separate titles, such as Shiur Komah and Tefillah L’Moshe.

Some other sefarim for which the Ramak is known are Tomer Devorah, Elimah Rabbasi and Sefer Gerushin. Certain parts of the Ramak’s works are still in the form of manuscripts, whereas his existing writings suggest many other compositions which he either intended to write or had actually written, but were lost.

Or Yakar was first published by Harav Menachem Azariah, the Rama of Pano, who bought the manuscripts from the Ramak’s widow for 1,000 gold coins.

Around 5310/1550, the Ramak founded a yeshivah in Tzfas, which he led for the next 20 years, until his petirah. Among his talmidim were many of the luminaries of Tzfas, including Harav Eliyahu de Vidas, mechaber of Reishis Chochmah, Harav Eliyahu Galanti, and Harav Chaim Vital, who later became the disseminator of the teachings of the Arizal.

When the Ari arrived in Tzfas, the Ramak was his Rebbe as well.

According to the Chidah, the Ramak was zocheh to see Eliyahu Hanavi.

The Ramak was niftar on 23 Tammuz 5330/1570, at the age of 48. The Arizal spoke at the levayah, and said that he saw two pillars of fire in front of the mittah. He also paraphrased the following passuk to refer to the Ramak: “Vechi yihyeh b’ish chet mishat maves” — when you shall witness a tzaddik, who was without sin; “v’humas” — and nevertheless he was niftar; “V’salisa oso al etz” — assume that this is because of the snake, who enticed Chavah to eat from the tree, and its effect was death.

He was buried in Tzfas’ old cemetery.

In 1535, Sir Thomas More went on trial in England, charged with high treason for rejecting the Oath of Supremacy. (More was convicted, and executed.)

In 1863, the pivotal, three-day Civil War Battle of Gettysburg, resulting in a Union victory, began in Pennsylvania.

In 1942, the First Battle of El Alamein began during World War II.

In 1946, the United States exploded a 20-kiloton atomic bomb near Bikini Atoll in the Pacific.

In 1963, the U.S. Post Office inaugurated its five-digit ZIP codes.

In 1973, the Drug Enforcement Administration was established.

In 1980, “O Canada” was proclaimed the national anthem of Canada.

Ten years ago: At a summit, Israeli Prime Minister Ariel Sharon and Palestinian Authority Prime Minister Mahmoud Abbas rededicated themselves to peace efforts and spoke of a shared future for their peoples.

One year ago: Syria’s main opposition groups rejected a new international plan that called for a transitional government because the compromise agreement did not bar President Bashar Assad from participating.

Voters in Mexico returned the Institutional Revolutionary Party to power.