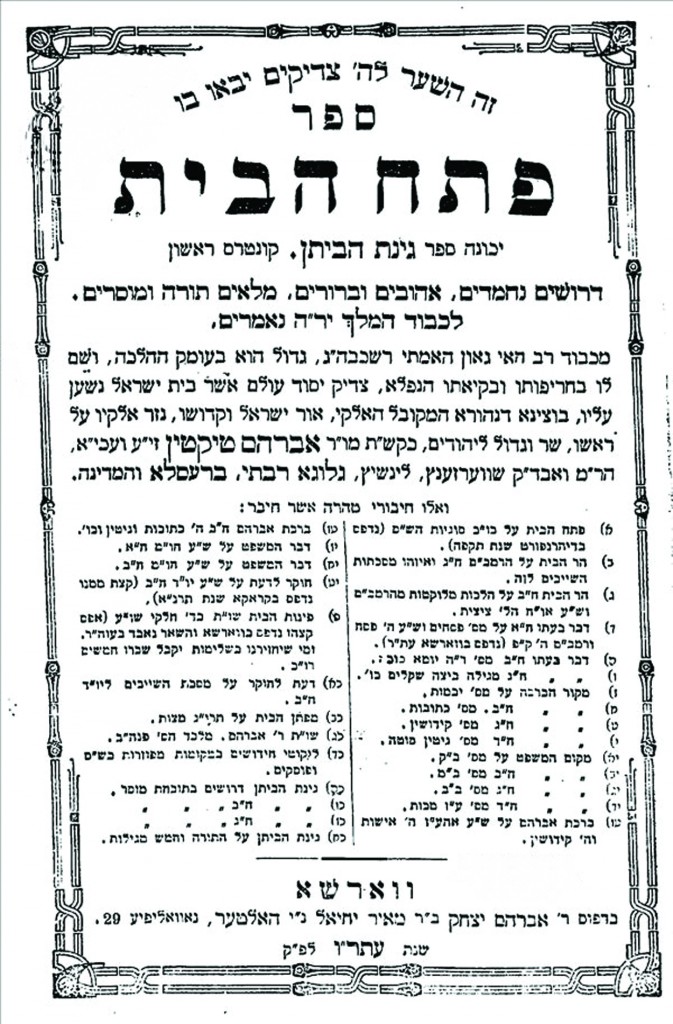 In 5383/1623, Prague Jews celebrate Purim Forhangen — “Purim of the Curtains,” in commemoration of the miraculous salvation of the Jewish ghetto after the head of the community was charged with stealing the governor’s priceless curtains.

In 5558/1798, anti-Jewish riots erupted in Ancona, Italy, a day after a “local” Purim which had been celebrated annually since 5451/1691. Roman mobs attempted to set fire to the ghetto and to sack it.

Harav Avraham Tiktin was the son of Harav Gedaliah. He was born in Schwersenz.

His father was niftar when Avraham was seven years old. He was brought up by his brother-in-law Harav Mordechai, who was Rav in Gridtz.

Reb Avraham was known as an outstanding gaon in Torah, and also for his tzidkus.

Together with Harav Shlomo Zalman, his son and successor as Rav, he waged a vicious but successful war against those groups who wished to uproot Yiddishkeit in those years in Germany.

Reb Avraham authored over 20 works, on all facets of Torah: Gemara, Halachah, Aggadah, Rambam and much more. Sadly, only his sefarim on Choshen Mishpat, Pesach Habayis, Ginas Bisan and Pinos Habayis, were published.

Reb Avraham was also known as a hidden mekubal.

He was niftar on 22 Teves 5581 and was succeeded as Rav of Breslau by his son Harav Shlomo Zalman.

In 1904, the Supreme Court, in Gonzalez v. Williams, ruled that Puerto Ricans were not aliens and could enter the United States freely; however, the court stopped short of declaring them U.S. citizens.

In 1951, during the Korean War, North Korean and Communist Chinese forces recaptured the city of Seoul.

In 1965, President Lyndon B. Johnson delivered his State of the Union address in which he outlined the goals of his “Great Society,” a series of domestic policy initiatives aimed at growing the economy and improving the quality of life for all.

In 1974, President Richard M. Nixon refused to hand over tape recordings and documents subpoenaed by the Senate Watergate Committee.

In 1998, a massive ice storm hit eastern Canada and the northeastern United States, continuing through January 10 and causing widespread destruction.