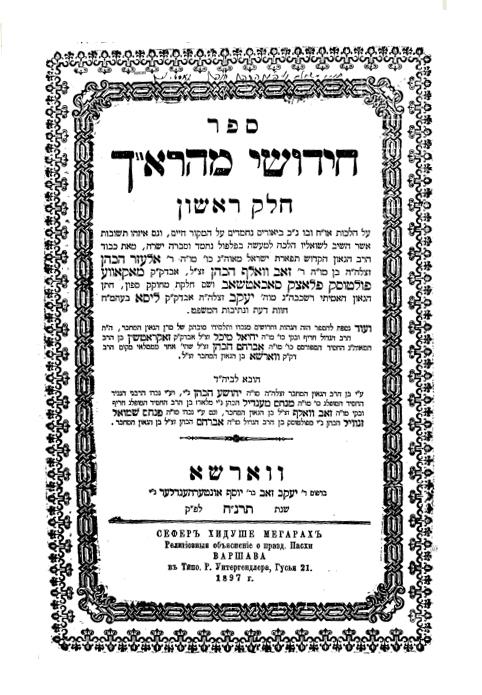 Harav Elazar Hakohen of Poltosk, zt”l, was the son of the wealthy Rav Zev Leipziger, and son-in-law of Rav Yaakov Luberbaum, Rav of Lisa and mechaber of Chavas Daas and Nesivos Hamishpat.

Reb Elazar was a devoted talmid of Harav Simchah Bunim of Peshischa, Harav Menachem Mendel of Kotzk and the Chiddushei Harim of Ger. After the petirah of the Chiddushei Harim, he was among those who did not transfer his allegiance to Harav Chanoch Henoch of Alexander, but instead followed Harav Avraham Landau of Tchechenov.

He considered Rav Zev Wolf Hakohen of Lask his main Torah teacher, and he also studied under his renowned father-in-law. Raised in great wealth, he did not accept a rabbanus until his vast business dealings failed; then he became Rav in Makov.

He served as Rav there twice; he also served in Sochotchov, and twice in Poltosk, and his Chassidim referred to him by that name. Twelve years before his petirah he returned to Sochotchov, where he was niftar at the age of 90.

He was eulogized by Harav Yisrael Yehoshua Trunk of Kutna and Harav Chaim Eliezer Waks of Pietrokov-Kalish.

He wrote numerous sefarim, including Chiddushei Maharach on the Shulchan Aruch; a commentary on Pirkei Avos; Zeicher Tzaddik V’yesod Olam, a eulogy on the Chiddushei Harim; and Zichron Niflaos on the Pesach Haggadah.

His two sons were Harav Avraham, a Dayan in Warsaw, and Harav Tzvi Hirsch, an Av Beis Din in Zgierzh. His son-in-law was Harav Dovid Dov Meisels, Av Beis Din of Lask.

In 1900, the first major U.S. automobile show opened at New York’s Madison Square Garden under the auspices of the Automobile Club of America.

In 1986, the Iran-Contra affair began to come to light as Ash-Shiraa, a pro-Syrian Lebanese magazine, first broke the story of U.S. arms sales to Iran.