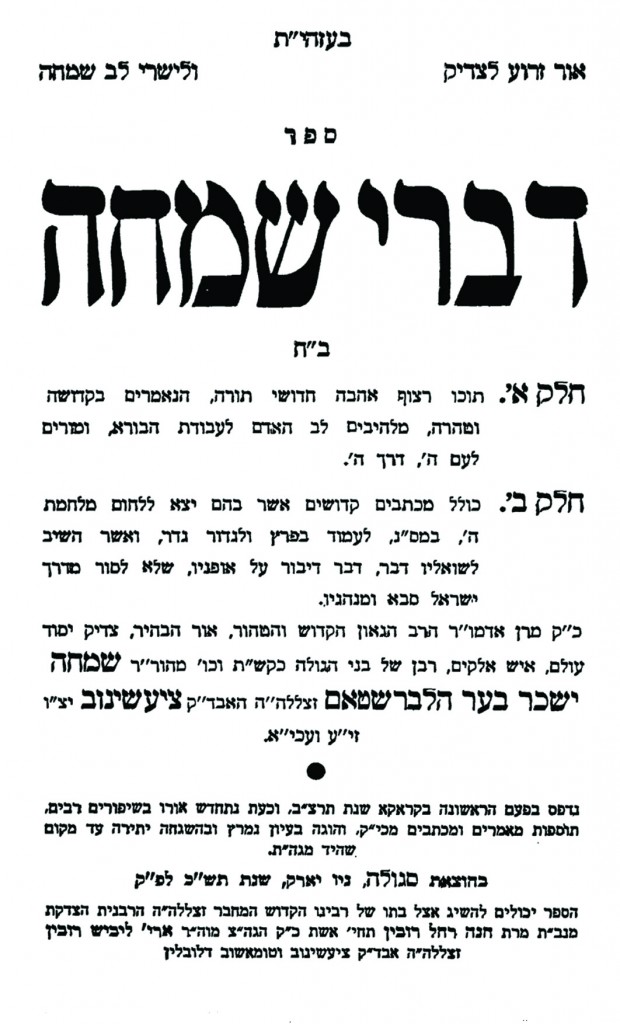 In 5243/1482, the first volume of the Talmud Bavli, maseches Brachos, was printed in Soncino, Italy.

In 5450/1689, the Jewish community of Ancona, Italy, miraculously survived an earthquake, unharmed. They declared a fast day in commemoration, and the following day, 21 Teves, was celebrated as a Purim.

In 5700/1940, the Nazis prohibited Jews from congregating in shuls and private homes for davening.

Harav Simchah Yissachar Ber Halberstam was the son of Harav Yechezkel Shraga of Shinev. He was born in 5629/1869, in Stropkov.

In 5646/1886, he married the daughter of Harav Yehoshua of Belz, zy”a. Reb Simchah Yissachar Ber became very close to his father-in-law, as well.

Reb Simchah Yissachar Ber was known as a gadol baTorah, and for his vast kana’us. He fought against the Zionist movement.

His divrei Torah and letters were collected in the sefer Divrei Simchah.

He was survived by his son, Harav Yechezkel Shraga of Chetchenov, and two sons-in-law: Harav Meshulam Zusha Twersky and Harav Aryeh Leib Rubin of Chetchenov-Tomashov.

In 1788, Georgia became the fourth state to ratify the U.S. Constitution.

In 1900, Secretary of State John Hay announced the “Open Door Policy” to facilitate trade with China.

In 1959, the Soviet Union launched its space probe Luna 1, the first manmade object to fly past the moon, its apparent intended target.

In 1960, Sen. John F. Kennedy of Massachusetts launched his successful bid for the presidency.

In 1999, a brutal snowstorm smashed into the Midwestern United States, causing 14 inches of snow in Milwaukee, Wisconsin, and 19 inches in Chicago, Illinois, where temperatures plunged to -13°F; 68 deaths were reported.

In 2006, 12 miners died in a methane gas explosion at the Sago Mine in West Virginia, W. Va., but one miner, Randal McCloy, Jr., was eventually rescued.