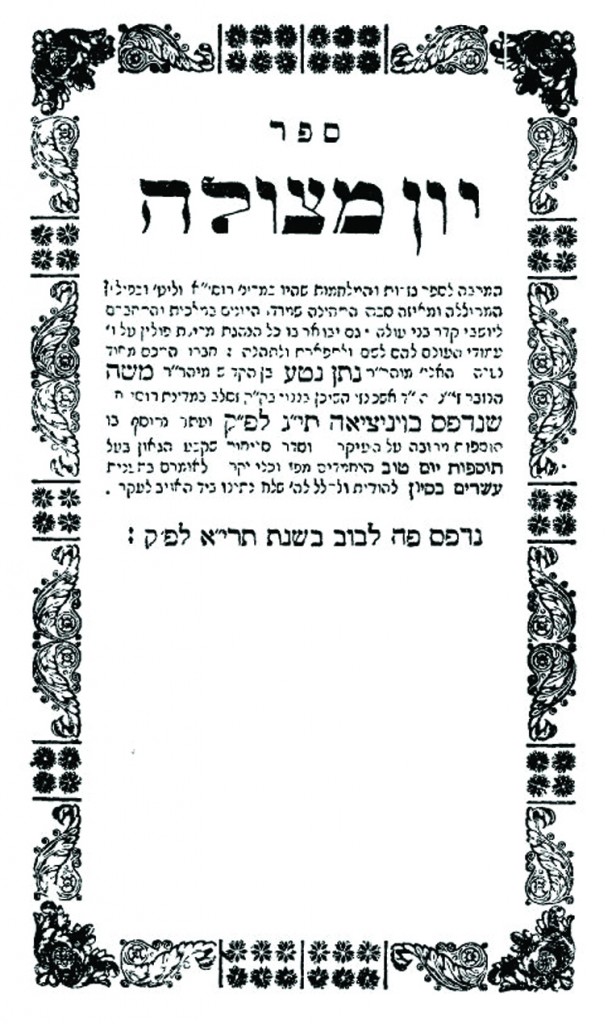 In 5654/1894, many Jews of Vilna were killed during the Polish uprising. Jews of Vilna held a fast day to commemorate this event.

Harav Nosson Nota Hanover was the son of Harav Moshe. It is unknown exactly when he was born, but it is known that he was born in Ostroha, in Ukraine, circa the late 5380s/1620s.

According to some sources, Reb Nosson Nota learned under the Maharsha, but this is not confirmed, especially in view of the fact that the Maharsha was niftar in 5482/1631.

In 5406/1646, he traveled to Cracow, where he delivered a spellbinding drashah (the basis of his sefer Taamei Sukkah). Later that year he married and settled in Zaslov, Volhynia, near his father-in-law.

He later wrote a historic work on the horrors the Jews faced during these years, describing the course of the uprising in the Polish- Lithuanian Commonwealth from a Jewish perspective. He named this sefer Yeven Metzulah.

In this work, he gives a brief description of the Polish government of the time and of the relations between the Poles, Jews and Cossacks, and the causes that led to the uprising. He also gives a very vivid picture of Jewish life in Poland and the yeshivos during those years.

When the Turks placed Vienna under siege, the Hungarians rebelled against the Austrians and destroyed the city Ungarisch-Brod, killing all the Jews in the city’s shul, among them Reb Nosson Nota, on 20 Tammuz 5443/1683.

In 1778, the Revolutionary War Battle of Monmouth took place in New Jersey; it was from this battle that the legend of “Molly Pitcher” arose.

In 1836, the fourth president of the United States, James Madison, died in Montpelier, Va.

In 1838, Britain’s Queen Victoria was crowned in Westminster Abbey.

In 1863, during the Civil War, President Abraham Lincoln appointed Maj. Gen. George G. Meade the new commander of the Army of the Potomac, following the resignation of Maj. Gen. Joseph Hooker.

In 1914, Archduke Franz Ferdinand of Austria and his wife, Sophie, were assassinated in Sarajevo by Serb nationalist Gavrilo Princip. This event sparked World War I.

In 1922, the Irish Civil War began between rival nationalists over the Anglo-Irish Treaty establishing the Irish Free State. (The conflict lasted nearly a year, resulting in defeat for anti-treaty forces.)

In 1978, the Supreme Court ordered the University of California-Davis Medical School to admit Allan Bakke, a white man who argued he’d been a victim of reverse racial discrimination.

In 2000, seven months after he was cast adrift in the Florida Straits, Elian Gonzalez was returned to his native Cuba.