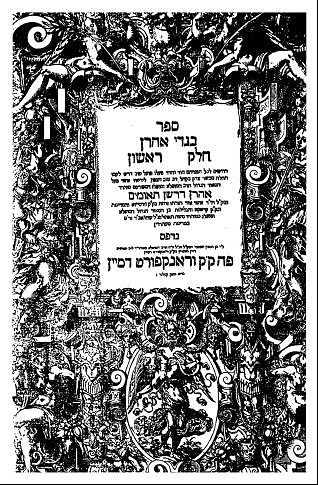 In 3830/70 C.E., Titus attacked the walls of the second Beis Hamikdash with battering rams.

In 5027/1267, Pope Clement IV established the abhorrent Inquisition in Rome.

The first deportation of Jews from Holland occurred.

Harav Aharon Teumim of Cracow was born in 5390/1630. His father, Harav Moshe Teumim, was Rav in Mehrin. His paternal grandfather was Harav Shimon Teumim Lemil, from the Gedolim of Vienna.

From 5419/1659 through 5432/1672, Reb Aharon held the position of darshan and maggid shiur in Prague. Later, he was appointed Rav and Rosh Yeshivah in Worms, Germany. In all his capacities, he was known as a tremendous talmid chacham, with a phenomenal memory.

After the petirah of Harav Mordechai Deiches, zt”l, Rav of Cracow, Reb Aharon was chosen to succeed him. He was to have moved there already in 5447/1687, but because of political circumstances, he delayed his departure from Worms by a few years, until 5450/1690. Shortly after Reb Aharon left Worms, the city was destroyed by the troops of King Louis XIV of France.

Reb Aharon served as Rav in Cracow for barely four months, before a Polish nobleman had him arrested. He was killed on Shabbos Parashas Mattos-Masei, 2 Av 5450/1690, in Chmelnik. He was buried in Pintchov, where the local Rav was his brother-in- law, the husband of his sister, Harav Yehudah Leib Tzintz of Helishoi.

In 1776, the Declaration of Independence was read aloud to Gen. George Washington’s troops in New York.

In 1850, the 12th president of the United States, Zachary Taylor, died after serving only 16 months of his term. (He was succeeded by Millard Fillmore.)

In 1918, the Distinguished Service Cross was established by an Act of Congress.

In 1943, during World War II, the Allies launched Operation Husky, their invasion of Sicily, with nighttime landings of American and British troops; a full-scale incursion by sea began in the early hours of July 10. (More than a month later, the Allies secured the island from the Axis.)