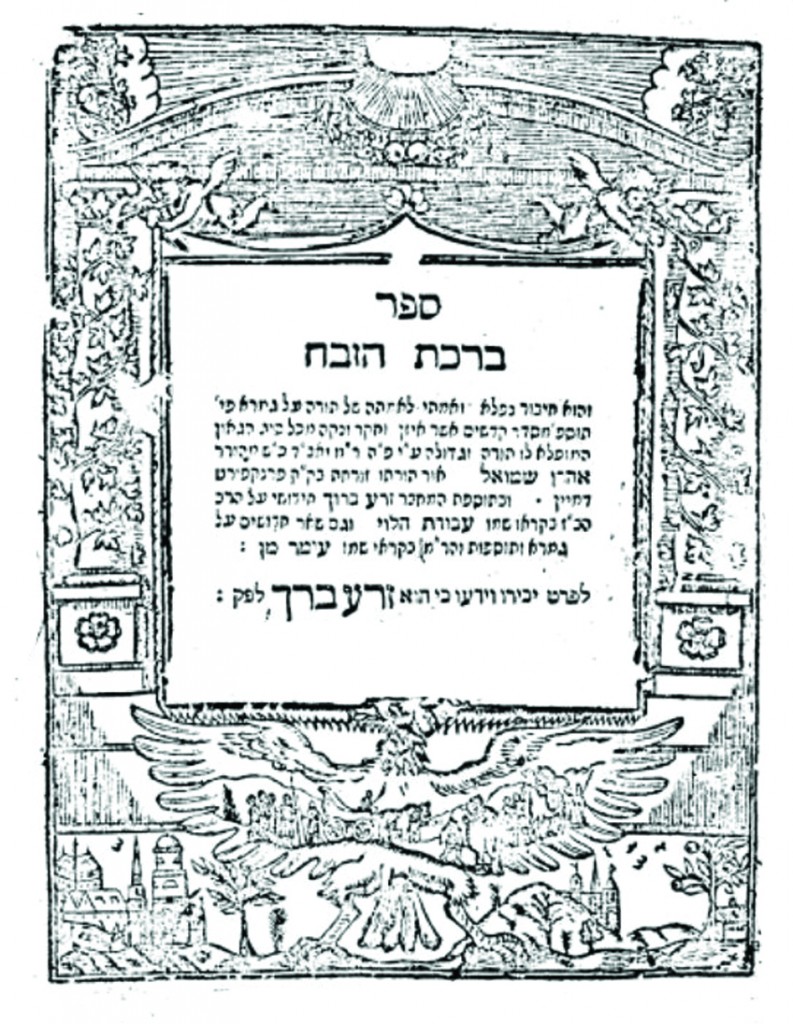 Harav Aharon Shmuel was born in Kaidenov, in 5384/1624. His father, Harav Yisrael, served as Rav there.

He learned under the Rebbe Reb Heshel in Cracow.

At a young age, Reb Shmuel was appointed Rav in a number of kehillos. Among his noted talmidim is the Shach, to whom Reb Shmuel gave a warm haskamah on the first edition of his sefer.

During the calamities of the rebellion of Chmielnicki, known by the acronym of its years Tach v’Tat, 5408–9/1648–9, Reb Shmuel was forced to flee, and his two young daughters were killed. His house was burned down and many of his sefarim were destroyed.

He settled in Poland, and was appointed Rav and Rosh Yeshivah of Nikolsburg.

Following the petirah of the Rebbe Reb Heshel, Reb Shmuel was considered by many to be the leading posek hador. He would often travel from kehillah to kehillah, and was always received with much honor.

Besides being a leading talmid chacham and posek, Reb Shmuel was also known as a mekubal.

Later, Reb Shmuel also served as Rav in other kehillos, among them Brisk, Fiorda and Frankfurt. His last post was in the city of Cracow.

When Reb Shmuel was appointed Rav of Frankfurt, one of the foremost Jewish cities, he thought of remaining there. When he was offered the post of Rav in Cracow, he accepted, explaining that with this he saw a chance to continue the legacy of his Rebbi.

He wrote several sefarim: Birkas Hazevach, on Seder Kodshim; Birkas Shmuel, on the Torah; Teshuvos Emunas Shmuel, his responsa; and Tiferes Shmuel, his chiddushim on the Rosh.

His son, Harav Tzvi Hirsh, wrote the sefer Kav Hayashar. It is also known that Harav Nachum, the brother of the Shach, was the son-in-law of Reb Shmuel.

In 1942, the FBI announced the arrests of eight Nazi saboteurs put ashore in Florida and Long Island, N.Y. (All were tried and sentenced to death; six were executed while two were spared for turning themselves in and cooperating with U.S. authorities.)

In 1950, the U.N. Security Council passed a resolution calling on member nations to help South Korea repel an invasion from the North.

In 1963, President John F. Kennedy spent the first full day of a visit to Ireland, the land of his ancestors, stopping by the County Wexford home of his great-grandfather, Patrick Kennedy, who’d immigrated to America in 1848.

In 1977, the U.S. Supreme Court struck down state laws and bar association rules that prohibited lawyers from advertising their fees for routine services.

In 1991, Supreme Court Justice Thurgood Marshall, the first black jurist to sit on the nation’s highest court, announced his retirement.