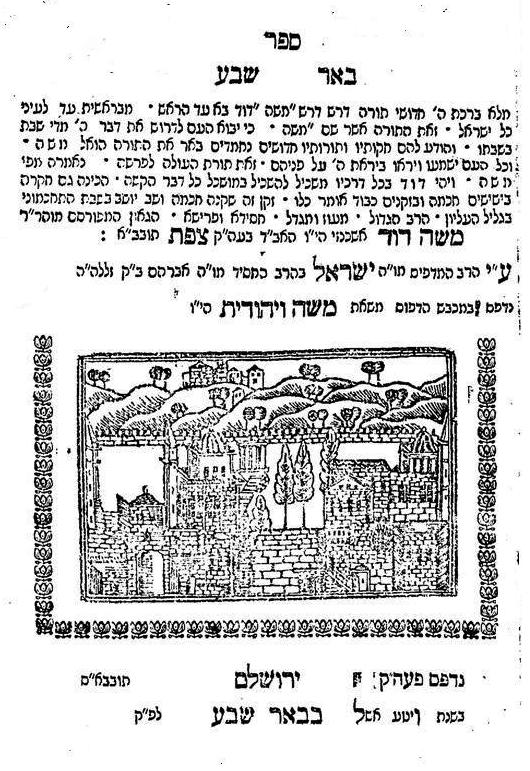 In 2449/1312 B.C.E., Moshe Rabbeinu destroyed the egel and ascended Har Sinai to invoke Heavenly mercy for Bnei Yisrael over committing the cheit ha’egel.

In 5029/1269, Louis IX, king of France, decreed that all Jews must wear the distinctive yellow badge, known as the badge of shame.

Harav Moshe David Ashkenazi was born in 5534/1774. His father, Harav Asher Anshil, was Rav in Razdil. He was a descendant of the Chacham Tzvi, the Maginei Shlomo, the Taz and many other leading Gedolei Yisrael.

Reb Asher Anshil later moved to Lvov (Lemberg), where he replaced his father, Harav Moshe, as Rav. Reb Asher Anshil was also one of the leading Rabbanim of the Vaad Arba Aratzos.

In 5563/1803, at the age of 29, Reb Moshe David was appointed Rav of Toltshova, Hungary. He held this post for 40 years. During his tenure as Rav, he installed many takanos on behalf of the community. Reb Moshe David also taught many bachurim, and was much loved by the entire community.

Reb Moshe David was known as an outstanding gaon and talmid chacham, and was respected by many of the generation’s tzaddikim and Rebbes.

Before his trip, he traveled to receive the brachos of many Rebbes including the Toras Chaim of Kossov, Harav Yisrael of Ruzhin and Harav Meir of Premishlan.

When Reb Moshe David came to Reb Meir Premishlaner, Reb Meir asked him to stay for Shabbos — even though he had planned to travel on Tuesday. He complied with the wish of Reb Meir, although it would delay his plans, and remained for Shabbos. When he reached the port to await the next ship, he heard the news that the previous ship — the one he had wanted to travel on — had sunk.

Upon his arrival in Eretz Yisrael, Reb Moshe David settled in Yerushalayim. Later, he moved to Tzfas, where he was appointed Rav of the Ashkenazic kehillah.

Reb Moshe David was dynamic until his last day; he even served as sandak at a bris on the day of his passing.

His sons were Harav Shlomo, Rav of Bakshvitz; Harav Mordechai, Rav of Pistick; Harav Yoel, Rav of Zlotchov, and Rav Avraham, who was niftar in his younger years.

In 1483, Richard III began his reign as King of England; he was crowned the following month at Westminster Abbey.

In 1936, President Franklin D. Roosevelt was nominated for a second term of office by delegates to the Democratic National Convention in Philadelphia.

In 1948, the Berlin Airlift began in earnest after the Soviet Union cut off land and water routes to the isolated western sector of Berlin.

In 1950, President Harry S. Truman authorized the Air Force and Navy to enter the Korean conflict.

In 1990, President George H. W. Bush went back on his “no-new-taxes” campaign pledge, conceding that tax increases would have to be included in any deficit-reduction package worked out with congressional negotiators.