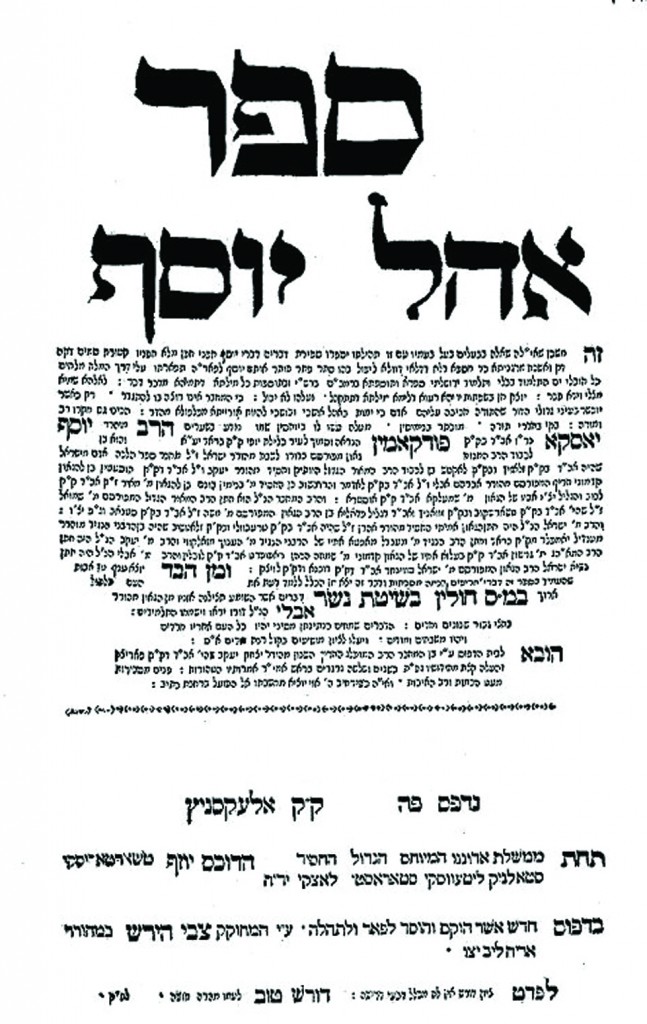 Harav Yosef Yoske was the son of Harav Yisrael Ashkenazi, author of Halachah Adam M’Yisrael, his chiddushim on masechtos Brachos, Shabbos, Eruvin, Pesachim and Rosh Hashanah. Reb Yisrael served as Rav in Zlavin and in Lokatch.

He married the daughter of Rav Shmuel, Rav in Tchortkov and Zhvallin.

Reb Yosef Yoske was Rav in Fudamkin, near Brod. He was a gaon in Torah, a Chassid, and a kadosh. He was the mechaber of Ohel Yosef on masechtos Brachos, Eruvin, Pesachim, Yoma, Sukkah and Beitzah. His son Rav Yitzchak Yaakov, Rav in Poritzen, published the sefer with an appendix of his own chiddushim.

In 1833, Benjamin Harrison, 23rd president of the United States, was born in North Bend, Ohio.

In 1862, The New York Tribune published an open letter by editor Horace Greeley calling on President Abraham Lincoln to take more aggressive measures to free the slaves and end the South’s rebellion.

In 1866, President Andrew Johnson formally declared the Civil War over, months after fighting had stopped.

In 1910, a series of forest fires swept through parts of Idaho, Montana and Washington, killing at least 85 people and burning some 3 million acres.

In 1955, hundreds of people were killed in anti-French rioting in Morocco and Algeria.

In 1977, the United States launched Voyager 2, an unmanned spacecraft carrying a 12-inch copper phonograph record containing greetings in dozens of languages, samples of music and sounds of nature.

In 1988, a cease-fire in the war between Iraq and Iran went into effect.

Eight British soldiers were killed by an Irish Republican Army land mine that destroyed a military bus near Omagh, County Tyrone in Northern Ireland.