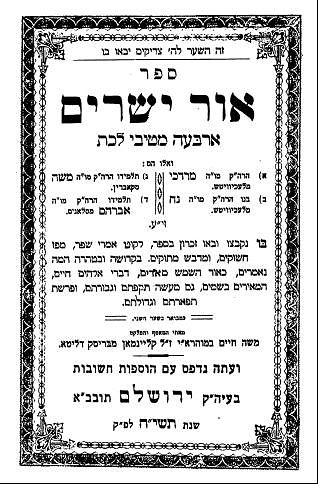 In 5550/1790, the French National Assembly granted full and equal citizenship to the Portuguese and Avignonese Jews.

Harav Mordechai was born in Nesvizh, Belarus, in 5502/1742. His father, Harav Noach, named him after the family patriarch, Harav Mordechai Yaffe, the Baal Halevushim.

When his son was still a young child, Harav Noach took him to Harav Aharon of Karlin, who was visiting their city. Rav Noach asked Rav Aharon to bless his son that he merit hasmadas haTorah — diligence in Torah. Rav Aharon took the boy in his hands, held him close to his heart, and told the father that from now on, he will learn with much hasmadah. When Rav Mordechai himself related this episode, he would add that he learned at that time how to make baalei teshuvah.

At a very young age, Mordechai was orphaned from his father; the residents of the town hired for him a private melamed. Mordechai refused to learn with him; rather, he would spend hours on end in the nearby forest — just he and his Creator. At the age of 12 he delivered an outstanding pilpul in the main shul of Vilna that astounded all those present. When he became famous as Rebbe, Rav Mordechai beseeched Heaven that this incident be forgotten — and although he was fluent in the entire Bavli, Yerushalmi, Midrashim, Poskim, Rishonim, Acharonim and even in sifrei Kabbalah, he was considered by many of his opponents to be an am haaretz.

In 5552/1792 Reb Mordechai was crowned by the thousands of chassidim as the new Rebbe.

Rav Mordechai spread the light of Chassidus in Lithuania, and he is considered the founder of Chassidus there, much as the Baal Shem Tov was the founder of general Chassidus. He attracted many outstanding talmidei chachamim to his group, known for their tremendous yiras Shamayim.

One main avodah in the court of Rav Mordechai was to instill emunah in the hearts of Klal Yisrael.

Renowned as a mohel mumcheh, Rav Mordechai had a special inyan in this mitzvah. His talmid, Harav Moshe of Kobrin, called him the malach habris.

Rav Mordechai was close with many of the generation’s leading Rebbes, among them the Rebbe Reb Baruch of Mezhibuzh, Harav Levi Yitzchak of Berditchev and Harav Yisrael of Ruzhin.

He was especially close with Harav Avraham of Kalisk, who appointed Reb Mordechai in charge of the tzedakah for the yishuv in Eretz Yisrael. Their connection was remarkable, as one never set eye upon the other, but nevertheless they felt close to each other.

Rav Mordechai would donate to this tzedakah every morning before davening. When he would send the monies to Eretz Yisrael, to Rav Avraham, he would write the names of all those who had contributed — except his own name. He called on his chassidim to donate to the fund as well.

The style of tefillah in his court was that of Karlin, full of enthusiasm and dveikus.

In 5570/1720, the date approached for the wedding of his grandson, Harav Shlomo Chaim, the son of his son Harav Aharon (later the Koidenover Rebbe), which was to be held in Stolin, in the home of the mechutan, Harav Asher of Stolin. Rav Mordechai did not want to travel to the wedding. His chassidim pleaded with him to go, and he went with a heavy heart.

The day of the wedding, Friday, 13 Shevat, Rav Mordechai was niftar. He was 68 at his petirah, and had been Rebbe for 18 years.

Rav Mordechai was succeeded by his son, Harav Noach. His other son, Harav Aharon, was niftar in his father’s lifetime, in 5566/1706.

Some of his divrei Torah are quoted in the sefer Ohr Yesharim, a compilation of the divrei Torah of the Lechovitcher Rebbes.

In 1848, James W. Marshall discovered a gold nugget at Sutter’s Mill in northern California, a discovery that led to the gold rush of ’49.

In 1961, a U.S. Air Force B-52 crashed near Goldsboro, N.C., dropping its payload of two nuclear bombs, neither of which went off; three crew members were killed.

In 1978, a nuclear-powered Soviet satellite, Cosmos 954, plunged through Earth’s atmosphere and disintegrated, scattering radioactive debris over parts of northern Canada.

Ten years ago: The U.S. Department of Homeland Security officially opened as its head, Tom Ridge, was sworn in. Creation of the new Cabinet agency was the largest government reorganization in more than 50 years, a response to the Sept. 11 attacks.