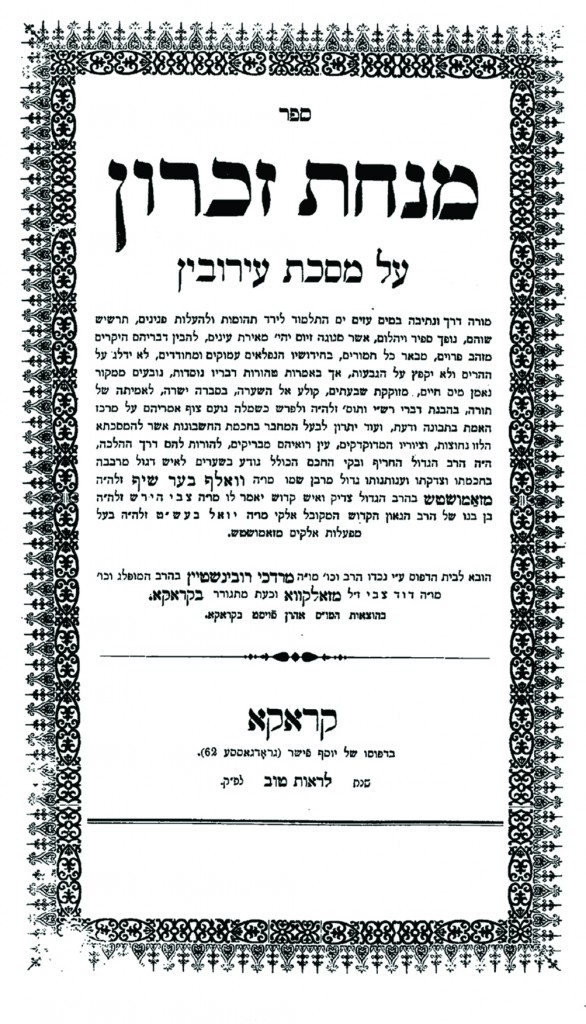 In 5701/1941, Nazis provoked the first anti-Jewish riots in Amsterdam but the Jews successfully fought off their attackers.

In 5703/1943, Jews in the Warsaw Ghetto put up their first resistance to the Nazi effort to liquidate them. The Nazis retreated, only to return three months later when the Warsaw Uprising started.

Harav Zev (Wolf) Dov Shiff was born on Rosh Chodesh Teves 5528/1767, in Zamoshitz. His father was Harav Tzvi Hirsh Heilprin (the family name was later changed by the government to Shiff). Rav Tzvi Hirsh was the son of Harav Yoel Baal Shem, the mechaber of Mifalos Elokim.

While he was still a young child, his parents made sure that he was close to talmidei chachamim, in order that he be inspired and yearn to grow in Torah and yiras Shamayim. Young Wolf Ber was seen as a clever child, whose achievements far surpassed those of his colleagues. Aside from the regular cheder hours, he would dedicate many long hours to learning on his own.

The city of Zamoshitz was a makom Torah, so he had the opportunity to learn under the famed Torah personalities who lived in the city: Harav Shlomo of Chelema, the Mirkeves HaMishnah, and Harav Dovid Mireles, the Korban HaEidah.

At the age of 20, Reb Wolf Ber began to tend to his parnassah; he opened a perfume business, which was very successful. As he had to be away from home three times a year at the fairs in Vienna, Leipzig and Brody, and knowing that he would have less time then for learning, Reb Wolf Ber would dedicate many of the night hours to learning.

Reb Wolf Ber was very generous with his tzedakah and helped out many families of talmidei chachamim.

On his way to fairs, Reb Wolf Ber would take detours to stop in the homes of Rabbanim, including those of Harav Mordechai Banet in Nikolsburg and Harav Baruch Frenkel-Teumim, the Baruch Taam. They would discuss many Torah topics with Reb Wolf Ber.

In 5569/1809, his business lost a lot of money, and later in the year, on Rosh Chodesh Sivan, Poland tightened its grip on Zamoshitz and ransacked the city. Reb Wolf Ber moved to Lvov, where he lived for the next five years. Later, he settled in Cracow.

In 5600/1840, Reb Wolf Ber devoted himself solely to limud haTorah, only leaving home for davening. During this period he wrote his chiddushim on the Shas.

His chiddushim on maseches Eiruvin were published under the name Minchas Zikaron.

In 1789, Georgetown University was established in present-day Washington, D.C.

In 1845, Congress decided all national elections would be held on the first Tuesday after the first Monday in November.

In 1933, the 20th Amendment to the U.S. Constitution, the so-called “Lame Duck Amendment,” was ratified as Missouri approved it.

In 1960, the U.S. Navy-operated bathyscaphe Trieste carried two men to the deepest-known point in the Pacific Ocean, a depth of more than 35,000 feet.

In 1964, the 24th Amendment to the Constitution, eliminating the poll tax in federal elections, was ratified.

In 1968, North Korea seized the Navy intelligence ship U.S.S.  Pueblo, charging its crew with being on a spying mission. The crew was released 11 months later.

In 1973, President Richard Nixon announced an accord had been reached to end the Vietnam War, and would be formally signed four days later in Paris.