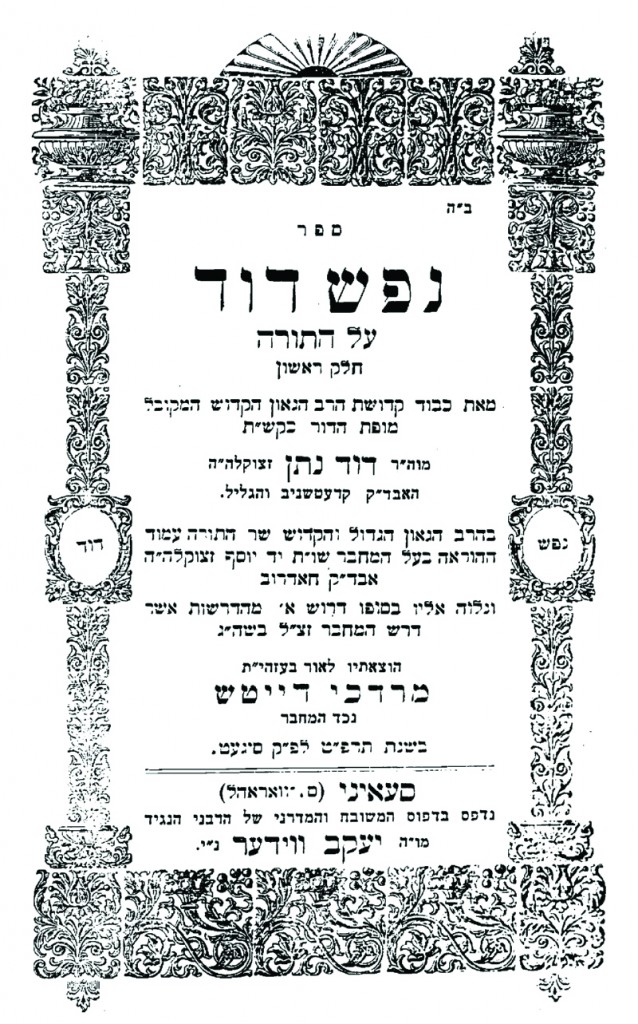 5270/1510, the Jewish community of Colmar, northern France, were expelled.

From the end of 5236/1476 the community suffered greatly at the hands of the Swiss Confederates who, on their way to France, plundered the Jews and committed numerous acts of violence. By 5238/1478 only two Jewish families were tolerated there.

The council requested from Maximilian I, in Dec. 1507, permission to banish the Jews from Colmar; this request was granted in 5270/1510.

Harav Nosson Dovid Deitsch was the son of Harav Yosef Yoel, who served as Rav in Chadarov and was the author of She’eilos U’teshuvos Yad Yosef.

Rav Nosson Dovid married the daughter of Harav Yitzchak Eizik, a descendant of the Rebbe Reb Heshel of Cracow, the Taz and the Shach.

An outstanding gaon, Reb Nosson Dovid was known for his greatness in Torah. He was also renowned for his exceptional middos.

He served as Rav of Kretchenif, where he was actively involved in the growth of Torah in the city.

Despite being frail all his life, Rav Nosson Dovid dedicated all his spare time to learning, day and night. He carried on halachic correspondence with many of the era’s Gedolim, notable among them the Menuchas Asher of Tchenger.

The davening of Rav Nosson Dovid was full of fervor and inspiration, motivating all who were near him to daven with deeper intent. His tefillos were also known for their koach of yeshuos.

Rav Nosson Dovid was niftar on 11 Shevat 5639/1839. He was survived by his sons, Harav Yitzchak Eizik of Teveria and Harav Moshe of Sighet. His sons-in-law were Harav Yechiel Michel, Rav of Mikolayev; Harav Avraham Reich of Yassin; and Harav Yeshayah Shalom Rokach, Rav of Litawisk.

Nearly 50 years after the petirah of Rav Nosson Dovid, his grandson, Rav Mordechai, son of his son Rav Moshe, published the divrei Torah of his grandfather, under the name Nefesh Dovid.

In 1498, during his third voyage to the western hemisphere, Christopher Columbus arrived at the present-day Caribbean island of St. Vincent.

In 1912, the Florida Keys Over-Sea Railroad, which connected the Keys with the mainland, went into service.

In 1917, President Woodrow Wilson pleaded for an end to war in Europe, calling for “peace without victory.” By April, however, America also was at war.

In 1998, Theodore Kaczynski pleaded guilty in Sacramento, Calif., to being the Unabomber in return for a sentence of life in prison without parole.

In 2002, Kmart became the largest retailer in United States history to file for Chapter 11 bankruptcy protection.

In 2006, Evo Morales was inaugurated as President of Bolivia, becoming the country’s first indigenous president.

In 2007, at least 88 people were killed when two car bombs exploded in the Bab al-Sharqi market in central Baghdad, Iraq.