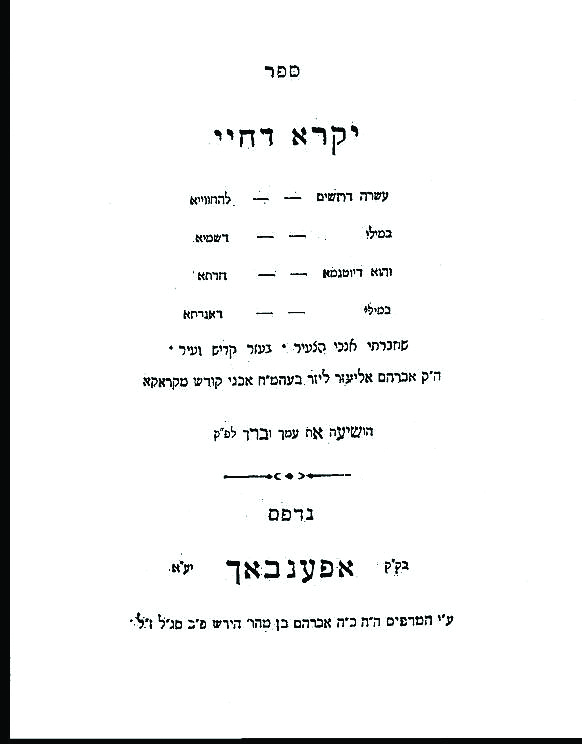 In 5534/1774, the Jews of Algiers escaped an attack by the Spanish Army. A Purim of Tammuz was established to mark the miracle.

In 5687/1927, a major earthquake struck Yerushalayim. The Kaf Hachaim notes (576:26) that while many Arabs died in the earthquake, miraculously no Jews were hurt.

Harav Avraham Eliezer ben Harav Yosef was born in Lask, in 5532/1772. In his youth, he learned under the Rav of the city, Harav Meir Tzilch. From quite a young age he was regarded as a Torah giant.

Unable to support himself in his hometown, Harav Avraham moved to Cracow, where he was appointed to serve as Dayan on the beis din of Harav David Tzvi Halevi. Harav Avraham was respected across the entire city.

At the age of 30, Harav Avraham completed his magnum opus, Avnei Kodesh, his novellae on Shas and Shulchan Aruch. The sefer received warm haskamos from many of the generation’s leading Gedolim.

Harav Avraham was also known as an outstanding darshan, and in 5582/1822, he published Yikra Dachayei, a compilation of 10 drashos.

Harav Avraham also carried on halachic correspondence with the Chasam Sofer and the Noda B’Yehudah.

In 1865, Union troops commanded by Maj. Gen. Gordon Granger arrived in Galveston, Texas, with news that the Civil War was over, and that all remaining slaves in Texas were free.

In 1963, President John F. Kennedy, speaking to Congress, criticized lawmakers for not acting on proposed civil rights legislation and called for passage of a single omnibus bill, the Civil Rights Act of 1963.

Soviet cosmonaut Valentina Tereshkova returned to Earth after three days as the first woman in space.

In 1972, Hurricane Agnes, blamed for at least 122 deaths, made landfall over the Florida Panhandle.

In 1987, the U.S. Supreme Court struck down a Louisiana law requiring any public school teaching the theory of evolution to teach creation science as well.