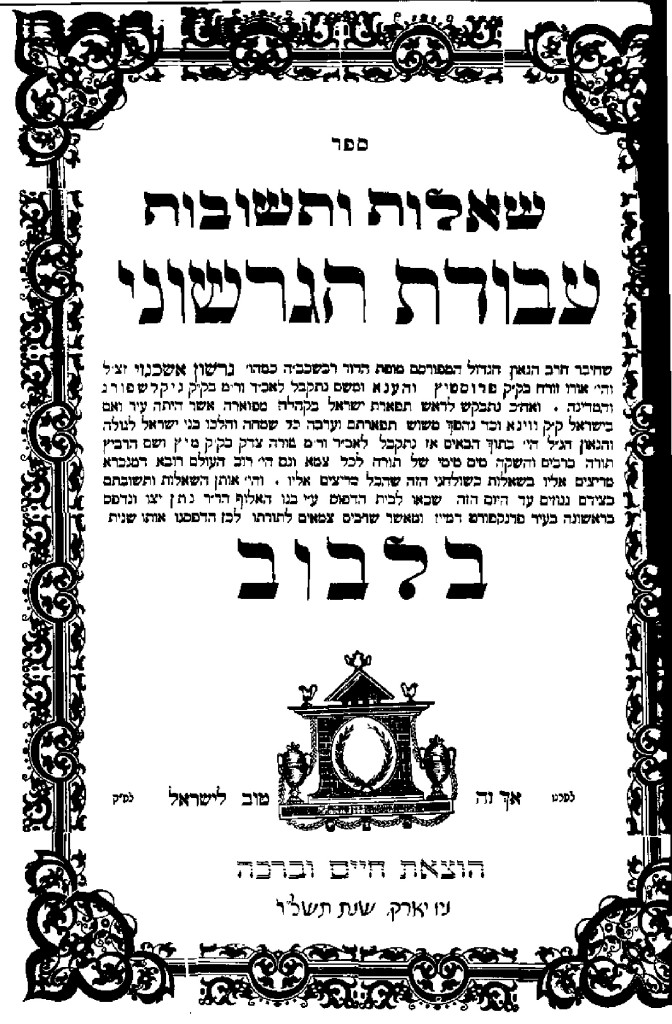 Harav Gershon was born c. 5078/1618 in the town of Holtz (Ulf), Germany. His father was Harav Yitzchak Ashkenazi.

Since Poland was the largest Torah center, Rav Gershon made his way to Cracow, where he entered the prestigious yeshivah of Harav Yoel Sirkish, the “Bach.” Rav Gershon was also a talmid of Harav Yehoshua, the Maginei Shlomo, head of a prominent Cracow yeshivah. After the Bach’s petirah, Rav Gershon’s attachment to the Maginei Shlomo grew stronger, and for many years he would consult him in matters of halachah. He would also consult the revered Rebbe Reb Heschel of Cracow.

Reb Gershon married the daughter of Reb Yehudah Leib Pass, a wealthy and prominent member of the Cracow community. Reb Leib supported Rav Gershon generously. Sadly, his Rebbetzin passed away at a young age, on 18 Shevat 5409/1649, leaving behind a number of orphans. Rav Gershon then married the daughter of Harav Menachem Mendel Kruchmal, the Tzemach Tzedek, who was Rav in Nikolsburg. He had had a close relationship with the Tzemach Tzedek before, but now their friendship rose to new heights. Unfortunately, Rav Gershon’s second Rebbetzin did not live long either; she passed away five years later, on 14 Nissan 5414/1654. Even after her petirah, Rav Gershon continued to address the Tzemach Tzedek as his father-in-law, and they maintained a close relationship.

Eventually Rav Gershon remarried and his third wife, Rebbetzin Raizel, merited arichus yamim. She lived on for 30 years after her husband’s petirah.

Several kehillos were privileged to have Rav Gershon as their Rav. At a relatively young age he was selected to serve as a dayan in Cracow. Several years later (about 5410/1650) he was sought after to serve the kehillah pf Prussnitz, Moravia. During that period he became close to the Shach. The Shach had fled the massacres of Tach V’tat (5408–09/1648–49), and he was at that time Rav in nearby Heleshi.

Subsequently, Rav Gershon became Rav in Hanow, Germany; then, with the petirah of his father-in-law the Tzemach Tzedek in 5421/1661, he was called upon to serve as Rav in Nikolsburg, Moravia. A year later he became Rav of the entire province of Moravia (Mehrin). Eventually he became Rav of Vienna, where he served as the principal Rav of all Austria.

When the Jews of Vienna were expelled in 5430/1670 by the wicked Emperor Leopold, Rav Gershon fled with them. Within a short time he was asked to accept the recently vacated Rabbanus position in Metz (at that time part of France). There he remained until his petirah, teaching, guiding and writing his teshuvos.

In his later years, Rav Gershon hired a talmid chacham to stay with him 24 hours a day, to watch lest he inadvertently violate the minutest dikduk in halachah.

In 1881, Kansas prohibited the manufacture and sale of alcoholic beverages.

In 1945, Operation Detachment began during World War II as some 30,000 U.S. Marines began landing on Iwo Jima, where they commenced a successful month-long battle to seize control of the island from Japanese forces.

In 1959, an agreement was signed by Britain, Turkey and Greece granting Cyprus its independence.

In 1986, the U.S. Senate approved, 83–11, the Genocide Convention, an international treaty outlawing “acts committed with intent to destroy, in whole or in part, a national, ethnical, racial or religious group,” nearly 37 years after the pact had first been submitted for ratification.