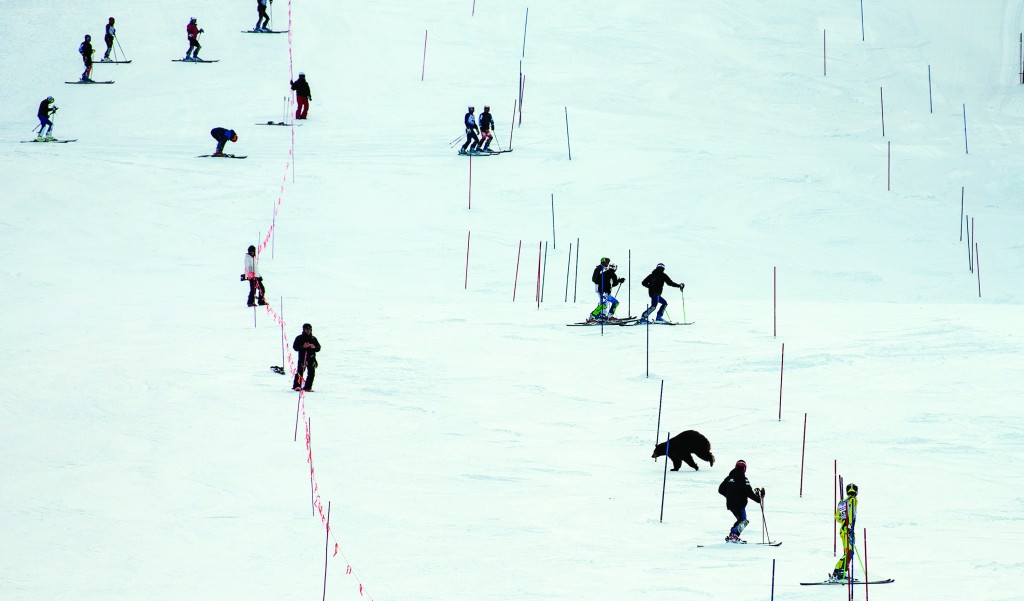 Skiers participating in a race let the bruin amble across the slopes and disappear into woods without incident at Heavenly Mountain Resort on Friday.

Nevada Department of Wildlife spokesman Chris Healy says an unusually dry, mild winter in the Sierra has made some bears either not hibernate or partially hibernate.

He tells the Tahoe Daily Tribune that other bears out this time of year are what the department calls “urban interface” bears that don’t hibernate if they have easy access to human food.

Cheryl Millham of Lake Tahoe Wildlife Care agrees bears are currently not in a real deep sleep because of the weather.

The snowpack around the Tahoe Basin is roughly 25 percent of normal for this time of year.

FINDLAY, Ohio (AP) – A cat that spent at least three winter days in a northwest Ohio drainpipe has been rescued after initially refusing attempts to lure it out with tuna, the classic call of “here, kitty, kitty” and even a cellphone app that meowed.

The Courier newspaper reports a resident in Findlay heard the cat’s cries Wednesday. Groundskeepers at a school cut the pipe Friday to free the orange cat, which was muddy, emaciated and hypothermic.

The male cat has been named Piper. It has a broken leg and other injuries signaling it’s had a rough time lately. But things are looking up, with a number of people volunteering to adopt if it goes unclaimed.

HOLDERNESS, N.H. (AP) – The tradition of harvesting lake ice at a New Hampshire campground is off to a cold and early start.

Crews started sawing blocks for the Rockywold-Deephaven Camps in Holderness on Thursday, which they’ve been doing for more than a century.

Last year, the three-day harvest didn’t start until Feb. 6 due to rain, warm weather and wind. The recent cold snap made for better ice conditions this year.

Instead of refrigeration units, campers use lake ice packed into insulated ice houses that keep the blocks frozen through summer.

This year, it’s being removed from Squaw Cove, an isolated spot along Squam Lake.

HOUSTON (AP) – An off-duty Houston firefighter made the best of his resources when trying to put out a truck tire fire: He used beer the rig was hauling.

Fire Capt. Craig Moreau and his wife were driving home Monday night after a trip to Austin when they came upon an 18-wheeler on fire. Moreau and the trucker, whose brake problems started the fire, tried using a small extinguisher.

Moreau says he thought the fire was out, but then noticed the blaze had flared up after crawling under the truck to check.

The firefighter then asked the driver what he was hauling. When he learned it was beer, he had his solution.

Both men began shaking and spraying cans of beer on the blaze, and the fire went out.

PHOENIX (AP) – Arizona wildlife officials have seized two tigers that were being kept in backyards in the Phoenix area.

Game and Fish biologist Randy Babb says the first tiger was found rope-tied in a Phoenix backyard about two weeks ago. The second tiger was located three days later in suburban Gilbert and was being kept in a large dog kennel.

Both tigers are about 8 months old, 200 pounds and appear to be in good health.

Babb says they’ll be taken to live at a wildlife preserve in Prescott.

Officials say the animals’ owner will be cited when he’s located because Arizona prohibits the possession of all wild carnivores.