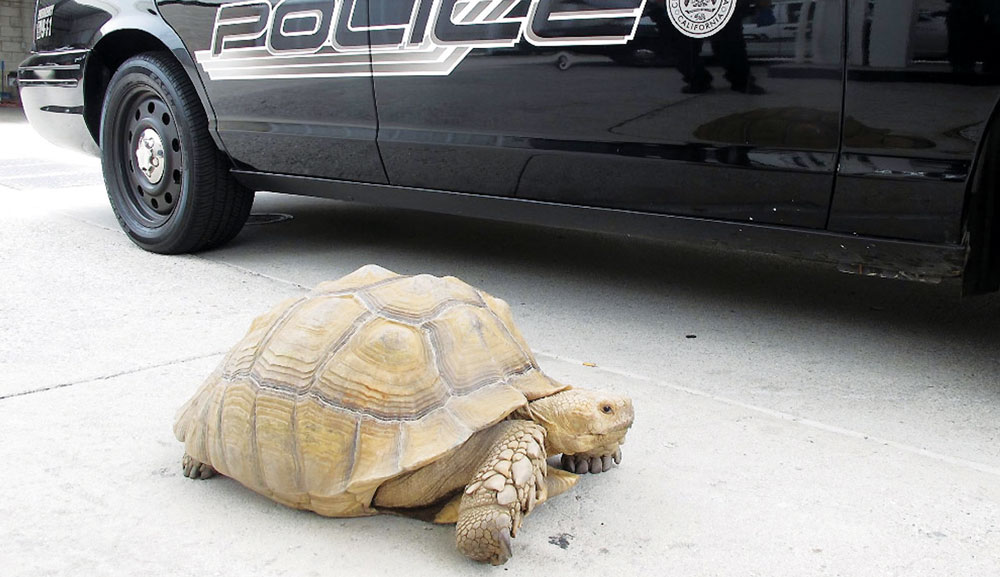 ALHAMBRA, Calif. (AP) – A giant tortoise found ambling down a street in suburban Los Angeles has been reunited with its owners.

The Alhambra Police Department says a local family claimed the 150-pound reptile, named Clark on Sunday, a day after it was spotted strolling on the street.

It took two officers to heft the creature into a patrol car so they could turn it over to animal control authorities. No word yet on how far the tortoise had gone from home when it was caught.

MINEOLA, N.Y. (AP) – Police in New York are on the hunt for a prolific bank robber who wears many hats.

Police say the man donned a range of wacky headpieces as he committed eight bank robberies in Nassau County over the course of 2½ months ending July 23.

One of the banks was robbed twice.

Surveillance photos show the robber wearing a floppy white hat at one bank. At another, he accessorized with a baseball hat that had a picture of President Barack Obama on it.

And at another, he decided on a hat with a long wig attached. Police believe it’s the same robber in all the photos. They say the stickup artist typically gives tellers a note threatening violence and demanding cash.

LONDON (AP) – Monkey see, monkey do. But when a monkey takes a selfie, who owns the copyright?

A series of self-portraits taken by Indonesian monkeys has sparked a copyright dispute between Wikipedia and a British wildlife photographer, who wasn’t amused that the popular images are being used for free.

Photographer David Slater complained that Wikipedia rejected his requests for the images to be removed from their website. He said he owns the copyright to the images of crested black macaque monkeys, which were taken in the Indonesian jungle in 2011.

Slater told the BBC that although the monkeys pressed the button, he had set the self-portraits up by framing them and setting the camera on a tripod.

“It wasn’t that the monkey stole the camera, went behind the bush and photographed it all by itself. It required a large input from myself,” he said.

But Wikimedia Foundation, the group behind the free information-sharing site, argued that Slater didn’t own the copyright to the photos because he didn’t take the images.

It said no one owned the copyright to the images, because under U.S. law, “copyright cannot vest in non-human authors” — the monkeys in this case.

“We take these requests very seriously, and we thoroughly researched both sides of the claim,” the group said in a statement. “When a work’s copyright cannot vest in a human, it falls into the public domain. We believe that to be the case here.”

Wikimedia’s spokeswoman Katherine Maher said Slater requested the photos’ removal in January, but the case captured public attention after the group included it in its first transparency report, published Wednesday.

DORSET, Minn. (AP) – Robert “Bobby” Tufts may have lost his bid for a third consecutive term as mayor of his tiny northern Minnesota tourist town, but the 5-year-old isn’t taking it too hard.

After helping raise money for local charities and declaring ice cream the top of the food pyramid, it was just time to move on, he said.

“It was fun, but it’s time to pass on the vote,” Bobby told The Associated Press on Monday, a day after he lost the annual election in Dorset.

Bobby’s rule over the tiny town — population ranging from nine to 28 people — was purely ceremonial, being that Dorset has no formal city government. People can vote as many times as they like — for $1 a vote — at ballot boxes around town. The winner is drawn at random during the annual Taste of Dorset festival.

Bobby said he was proud of his efforts during his reign in Dorset, about 150 miles northwest of Minneapolis. He helped raise money for the Ronald McDonald House Charities of the Red River Valley in Fargo, North Dakota. One of his other major acts was declaring ice cream a necessary food.

SHORELINE, Wash. (AP) – The parks department in the Seattle suburb of Shoreline has a “Piano in the Parks” program to give visitors a pleasant surprise.

Someone surprised the parks department by leaving a mystery piano in Shoreview Park. KOMO reports the piano discovered between two towering Douglas fir trees is not part of the program.

The department says the piano is not authorized in the park and has no weather protection. It’s also out of tune.

SYDNEY (AP) – Dozens of people helped rescue a fellow commuter in Australia by pushing against a train car to free the man whose leg slipped between the platform and the train.

Closed-circuit footage released by the Western Australia State Public Transport Authority showed the man lost his footing while boarding the train at a station in the city of Perth.

A passenger alerted railway staff who stopped the train from leaving, local media said. When railway workers realized the man couldn’t move, they called on other passengers to help.

The footage showed dozens of people rushing to help tilt the car to free the man, who fell at least thigh deep into the platform gap.

“It’s really heartwarming I think, to find an incident like this where everyone pitched in,” transport authority spokesman David Hynes said.

The man wasn’t named, but local media reported that he was believed to have escaped injury and caught the next train.

SIOUX CITY, Iowa (AP) – A federal judge in Iowa meted out an unusual punishment to a lawyer for repeatedly raising objections and interrupting depositions: She must produce a training video showing why such tactics are inappropriate.

Perhaps unsurprisingly, her law firm objected to the ruling.

Bennett wrote that during pretrial depositions in a lawsuit in which Ghezzi was defending Abbott Laboratories, she “proliferated hundreds of unnecessary objections and interruptions” that appeared to coach witnesses on how to answer questions and delayed the proceedings.

Bennett said that rather than issuing a monetary fine against Ghezzi, he wanted to take a stand against “obstructive deposition practices” that are common and that some litigators are even taught to use.

With that goal in mind, Bennett ordered Ghezzi to write and produce a training video that “provides specific steps lawyers must take to comply” with the rationale of his opinion. He said the video must address the impropriety of lawyers vaguely objecting to the form of questions, coaching witnesses and excessively interrupting. Bennett said the video could point out those jurisdictions that specifically allow “form objections.”

He said Jones Day would have to make the video available to all of its lawyers who appear in U.S. state or federal courts or who work in practices where other lawyers do. Bennett said his order must be complied with within 90 days, but that he would suspend it if it is appealed.

Jones Day attorney Dan Reidy said in a statement Tuesday that the firm plans to appeal. He said Ghezzi’s conduct “was appropriate and violated no rule of law or of the court,” and he noted that the plaintiffs’ lawyer didn’t complain at the time.