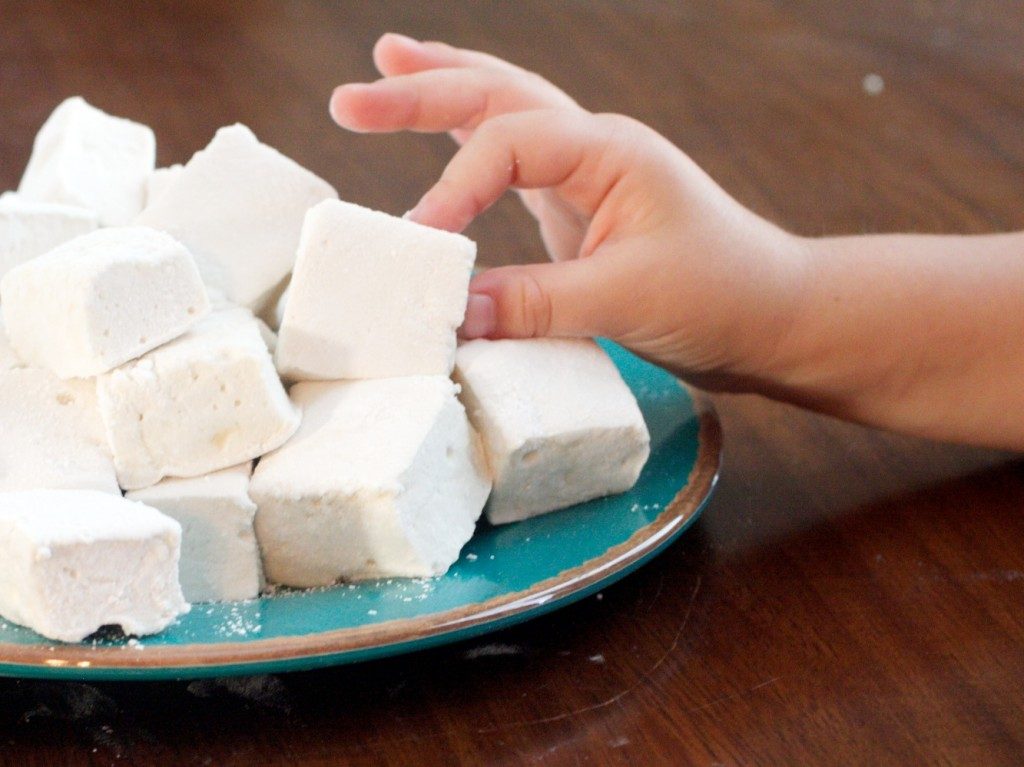 The use of marshmallow plants to make a candy dates back to ancient Egypt, where the recipe called for extracting sap from the plant and mixing it with nuts and honey. The stem was peeled back to reveal the soft and spongy flesh, which was boiled in sugar syrup and dried to produce a soft, chewy confection. Candy makers in early 19th-century France modernized the candy by whipping up the marshmallow sap and sweetening it. This treat was made locally in small candy stores. The candy was very popular, but making it was difficult and time-consuming. In the late 19th century, French manufacturers devised a way to get around this by using egg whites or gelatin, combined with corn starch, to create the chewy base. This was much easier than extracting the sticky substance from the marshmallow roots.

In 1948, candy makers came up with a process of running the ingredients through tubes, and then pushing out the finished product as a soft cylinder, which is then cut into sections and rolled in a mixture of finely powdered cornstarch and confectioner’s sugar — much like the marshmallows we enjoy today.

While most of us purchase marshmallows in neat plastic bags, many an intrepid cook will want to try making marshmallows at home. It is a simple process that yields much tastier results. You will need a candy thermometer for this recipe. They can be purchased for about $5.

*available at The Peppermill

Place the gelatin into your stand mixer along with 1/2 cup of the water.

In a small saucepan, combine the remaining 1/2 cup water, sugar, corn syrup and salt. Place over medium high heat, cover and cook for 3 to 4 minutes.

Turn the mixer on to low, and slowly pour the sugar syrup down the side of the bowl into the gelatin mixture. Once you have added all of the syrup, increase the speed to high. Continue to whip until the mixture becomes very thick and is lukewarm, approximately 12 to 15 minutes. Add the vanilla during the last minute of whipping.

While the mixture is whipping, prepare the pans:

Combine the confectioners’ sugar and cornstarch in a small bowl. Lightly spray a 13-inch x 9-inch metal baking pan with nonstick cooking spray. Add the sugar and cornstarch mixture, and shake around to completely coat the bottom and sides of the pan. Return the remaining mixture to the bowl.

When the marshmallow mixture is ready, pour the mixture into the prepared pan, using a lightly oiled spatula for spreading evenly into the pan. Dust the top with the remaining sugar and cornstarch mixture to lightly cover. Reserve the rest for later. Allow the marshmallows to sit uncovered for at least 4 hours and up to overnight.

Turn the marshmallows out onto a cutting board, and cut into 1-inch squares using a pizza wheel or cookie cutters dusted with the confectioners’ sugar mixture. Once cut, lightly dust all sides of each marshmallow with the remaining mixture, using additional if necessary. Store in an airtight container for up to three weeks.