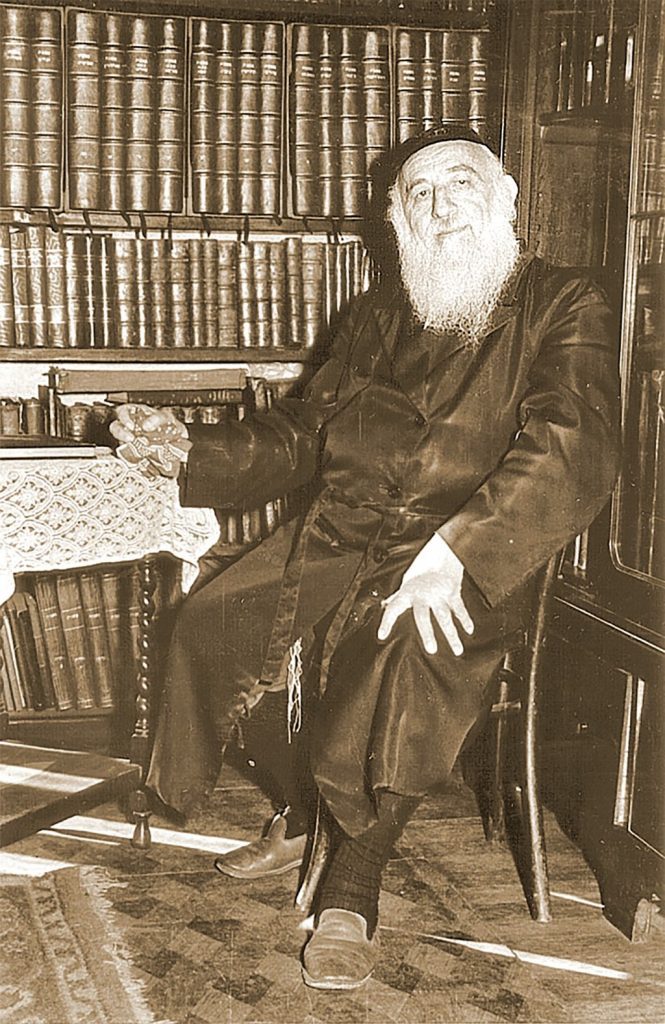 In 5383/1622, Prague Jews celebrate Purim Forhangen — Purim of the Curtains — in commemoration of the miraculous salvation of the Jewish ghetto after the head of the community was charged with stealing the governor’s priceless curtains.

Harav Shalom Moskowitz was born in Suceava, Romania, on 17 Kislev 5638/1877. His father was Harav Mordechai Yosef Moshe of Sulitza, zy”a. He was a fifth-generation descendant of Harav Yechiel Michel of Zlotchov, zy”a.

He was named after his mother’s great-grandfather, the Sar Shalom of Belz, zy”a.

After learning in Shotz, he traveled to the famed Maharsham, Harav Shalom Schwadron of Berzhan, zt”l, to learn; later he received semichah from his Rebbi.

He married the daughter of his father’s brother, Rav Meir.

In 5663/1903, Rav Shalom was appointed Rav in Shotz, a position he held until 5679/1919. Among his talmidim during these years was Harav Meir Shapiro, zt”l, Rav of Lublin and founder of Yeshivas Chachmei Lublin.

During World War I, Rav Shalom moved to Cologne, Germany, where a group of Chassidim who had also settled there gathered around him.

After World War I, he moved to Tarnow, Galicia.

In 5687/1927, Rav Shalom arrived in England, settling in Stamford Hill, a part of London where not many chassidic Jews lived then. He established his beis medrash and became known as the Shotzer Rebbe.

Many of London’s leading talmidei chachamim visited his home to discuss Torah, which was known for its hachnasas orchim as well.

Reb Shalom was fluent in both the revealed Torah and in Kabbalah. His lifestyle was one of holiness and simplicity.

His sons were Harav Yitzchak, Harav Yaakov, and Harav Yechiel Michel. All were niftar in his lifetime.

Reb Shalom wrote several volumes of Daas Shalom, which were arranged according to the order of Perek Shirah.

His tzava’ah directed: “Should a person be in need of a refuah or any other yeshuah, for himself or on behalf of another person, he should visit my kever, light candles and make his request.

“He must undertake an addition or improvement in his avodas Hashem. I will then beseech my heilige zeides that they intercede on his behalf before the Kisei Hakavod.”

Many people testify that their tefillos were answered. Every Erev Shabbos, as well as on the day of the Rebbe’s yahrtzeit, the ohel is full of mispallelim.

In 1941, President Franklin D. Roosevelt, in his State of the Union address, outlined a goal of “Four Freedoms”: Freedom of speech and expression; the freedom of people to worship in their own way; freedom from want; freedom from fear.

In 1968, a surgical team at Stanford University School of Medicine in Palo Alto, California, led by Dr. Norman Shumway, performed the first U.S. adult heart transplant, placing the heart of a 43-year-old man in a 54-year-old patient. The recipient died 15 days later.

In 2001, with Vice President Al Gore presiding in his capacity as president of the Senate, Congress formally certified George W. Bush the winner of the bitterly contested 2000 presidential election.