In 5550/1790, the French National Assembly granted full and equal citizenship to the Portuguese and Avignonese Jews. 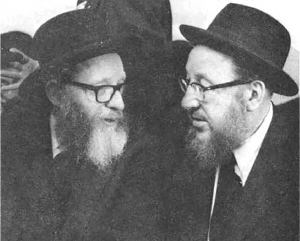 Harav Baruch Sorotzkin was born on 13 Shevat, 5677/1917. His father was Harav Zalman Sorotzkin, zt”l, the illustrious Lutzker Rav, mechaber of Oznayim LaTorah; his mother was the daughter of Harav Eliezer Gordon, zt”l, the founding Rosh Yeshivah of Telshe.

Rav Baruch was a brilliant student with a great love of Torah. Throughout his life, Rav Baruch never rested; he always used every precious moment to accomplish something, whether it was for his yeshivah or for Klal Yisrael.

In his youth he learned in the Yeshivah of Baranovitch under Harav Elchanan Wasserman, zt”l, Hy”d, and later in Kamenitz under Harav Baruch Ber Leibovitz, zt”l.

When the war broke out and the yeshivah fled to Vilna, Rav Baruch went to study in the Telshe Yeshivah. The Rosh Yeshivah was his cousin, Harav Avraham Yitzchok Bloch, zt”l, Hy”d, who was to became his father-in-law.

Upon Rav Katz’s petirah, Rav Baruch and Harav Mordechai Gifter became the Roshei Yeshivah of Telshe. Rav Baruch assumed responsibility for the Chinuch Atzmai school system, a position that had been held by his father in Eretz Yisrael, and was also a member of the Moetzes Gedolei Hatorah of Agudath Israel of America.

Rav Baruch’s ahavas haTorah knew no bounds. Every extra minute was spent learning, and every chiddush was recorded. The Rosh Yeshivah went to great lengths to write down every shiur he delivered. Every dvar Torah he said at a bris or at sheva brachos, every address at a public affair, whether prepared or impromptu, was committed to writing in one of his copious notebooks.

Of all the shiurim, speeches and shmuessen he delivered, he placed the greatest emphasis on the hashkafah discourses he delivered in the yeshivah’s beis medrash, known as shiurei daas.

In the year 5722/1962, Rav Baruch was diagnosed with a life-threatening illness. Although his illness made him very weak, Rav Baruch spent as much time as possible at the yeshivah.

Much to his doctors’ surprise, with the tefillos of the entire olam haTorah and a brachah from the Gerrer Rebbe the Beis Yisrael, he recovered, and he continued to expand his Torah activities for the next seventeen years.

Eventually, his illness returned with a vengeance. Rav Baruch succumbed to the illness on 13 Shevat, 5739/1979. A collection of his chiddushei Torah, Sefer Ha’binah Ve’habrachah, was published posthumously.

In 1788, the first European settlers in Australia, led by Capt. Arthur Phillip, landed in present-day Sydney.

In 1962, the United States launched Ranger 3 to land scientific instruments on the moon — but the probe ended up missing its target by more than 22,000 miles.

In 1993, Vaclav Havel was elected president of the newly formed Czech Republic.