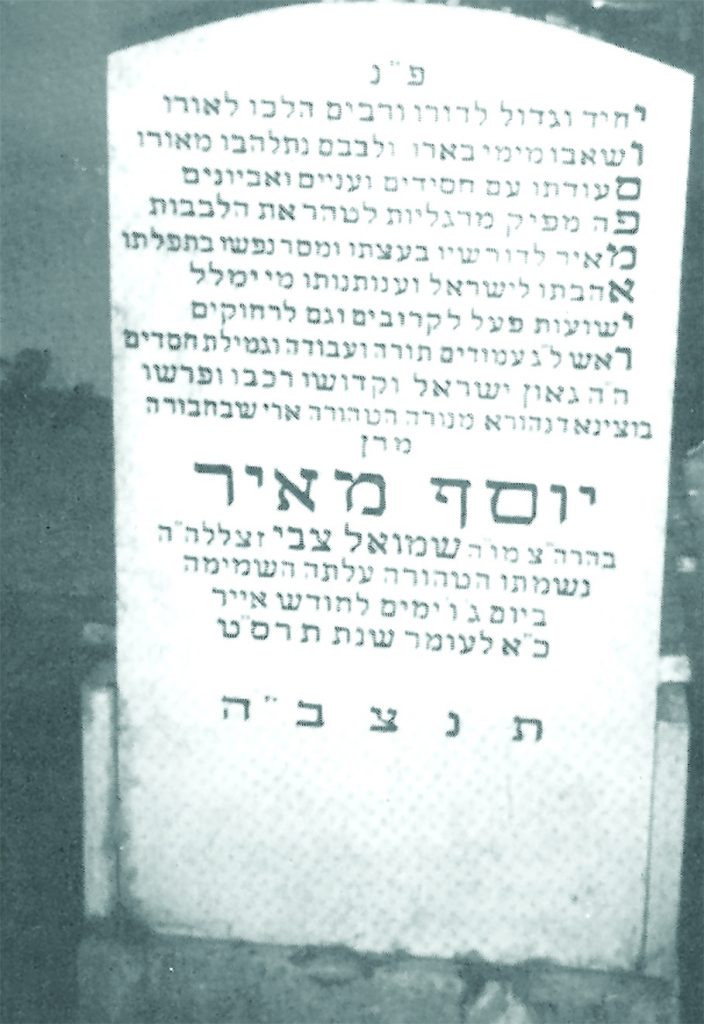 In 5708/1948, the British mandate over Eretz Yisrael came to an end, exactly 28 years after it began. The armies of Egypt, Jordan, Syria, Iraq and Lebanon promptly invaded Eretz Yisrael.

At age 12, Reb Yosef Meir was already deemed a suitable learning partner for his uncle, Harav Yitzchak Isaac of Swaliva. Every morning of that year he covered two dapim of Choshen Mishpat with the SMA and the Shach, and every evening he learned Shas with poskim, so that by the end of that first winter he had covered Bechoros with the Rit Algazi, all of Brachos and most of Shabbos. In his “free time,” he also learned Tanach and a bit of dikduk.

After a year with his uncle, he went to learn in the yeshivah of Harav Meir Eisenstadt, zt”l, the Maharam Asch, in Ungvar, where he proved to be an outstanding talmid. Later, though, he moved on to Chust, to the yeshivah of Reb Shmuel Shmelke Klein, the Tzror Hachaim.

At the age of 16, Reb Yosef Meir married the daughter of the naggid and chassid Reb Mordechai of Barshai, who supported him fully.

The Imrei Yosef lost his first Rebbetzin in 5617/1857, just three years after they were married. The following year he married the daughter of the naggid Reb Meir of Munkacs, but soon afterwards he himself fell ill with a lung disease.

His father, Harav Shmuel Tzvi, received a brachah from Reb Yitzchak Isaac of Ziditchov that Reb Yosef Meir would recuperate. When he recovered, he became one of the Ziditchover’s greatest and closest disciples.

With his move to Munkacs after his second marriage, the Imrei Yosef reached great heights in both limud Torah and avodas Hashem. During this period, he wrote most of his sefer Imrei Yosef and began working on Eitz Chaim, but did not finish.

This period of relative peace ended in 5630/1870 with the death of his second Rebbetzin, which left him widowed with two young daughters. Soon after, he married the daughter of Reb Ezra Yaakov Basch of Spinka, in Marmarosh, and moved there.

That summer the Imrei Yosef received a brachah from the Ziditchover Rebbe investing him with the authority to lead Chassidim. From that time on, Chassidim came to learn from him.

In 5664/1904, the Rebbe fell critically ill, but the tefillos of Yidden beseeching Heaven on his behalf gained him another five years. He was niftar on Tuesday, 6 Iyar 5669/1909.

His sefarim are entitled Imrei Yosef, on the Torah and the Yamim Tovim.

In 1863, during the Civil War, Confederate General Thomas “Stonewall” Jackson was accidentally wounded by his own men at Chancellorsville, Virginia; he died eight days later.

In 1890, the Oklahoma Territory was organized.