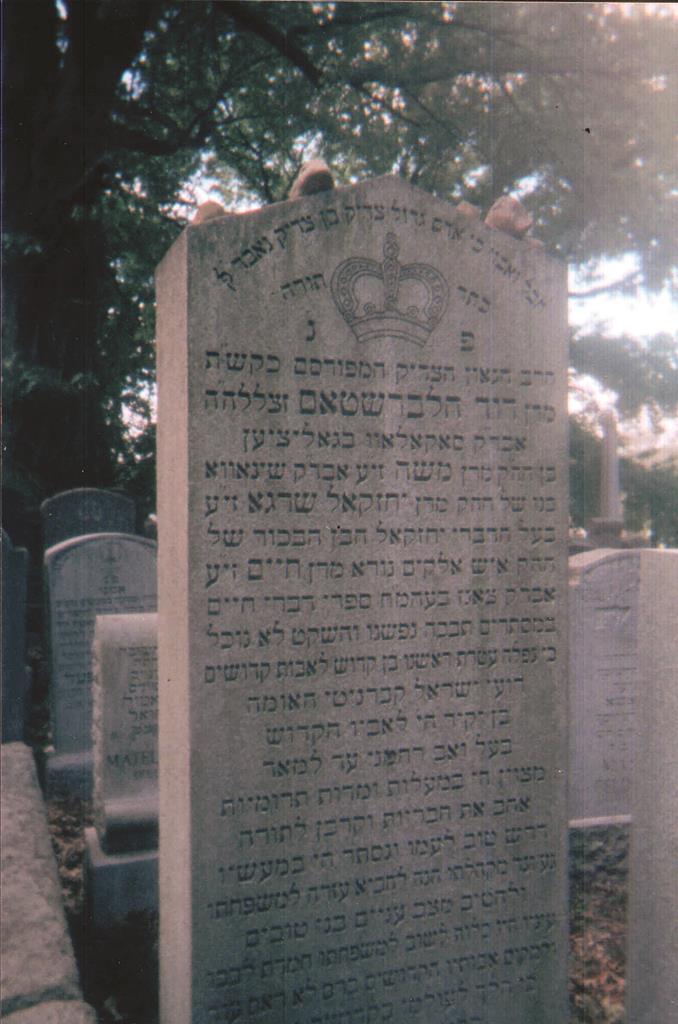 Harav Dovid Halberstam, the Sokolover Rav, was the son and grandson, respectively, of Reb Moshe and Reb Yecheskel of Shinova (mechaber of Divrei Yecheskel) and great-grandson of Reb Chaim of Sanz, zt”l, (the Divrei Chaim), zecher tzaddikim livrachah.

Reb Dovid came to the United States in the early part of the 20th century, from Galicia, bringing with him the great legacy bequeathed to him by his distinguished forebears.

The Sokolover Rav was known for his ahavas Yisrael and was mashpia on other Yidden, drawing them close to Torah and mitzvos. He sought their well-being and garnered assistance for families in need. He was known as a baal madreiga and for his sublime middos and qualities. Yet, as his matzeivah testifies, he was a nistar, indicating that much of his greatness was hidden and not apparent to those around him.

Although Reb Dovid greatly longed to return to his family and community back in Europe, Hashgachah willed otherwise and he was niftar on these shores in 5700/1939 on the sixth night of Chanukah at the age of 64. Due to the unrest engendered by World War II, it was impossible to bring him to kever avos in Europe and he was buried the next day in Union Field Cemetery in Queens. Many visit his kever till this day.

In 1775, Esek Hopkins was appointed the commander-in-chief of the Continental Navy.

In 1864, during the Civil War, Union Maj. Gen. William T. Sherman said in a message to President Abraham Lincoln: “I beg to present you as a … gift — the city of Savannah.”

In 1910, a fire lasting more than 26 hours broke out at the Chicago Union Stock Yards; 21 firefighters were killed in the collapse of a burning building.

In 1937, the first, center tube of the Lincoln Tunnel connecting New York City and New Jersey beneath the Hudson River was opened to traffic. (The second tube opened in 1945, the third in 1957.)

In 1944, during the World War II Battle of the Bulge, U.S. Brig. Gen. Anthony C. McAuliffe rejected a German demand for surrender, writing “Nuts!” in his official reply.

In 1989, Romanian President Nicolae Ceausescu, the last of Eastern Europe’s hardline Communist rulers, was toppled from power in a popular uprising.

In 2001, Richard C. Reid, a passenger on an American Airlines flight from Paris to Miami, tried to ignite explosives in his shoes, but was subdued by flight attendants and fellow passengers. (Reid is serving a life sentence in federal prison.)