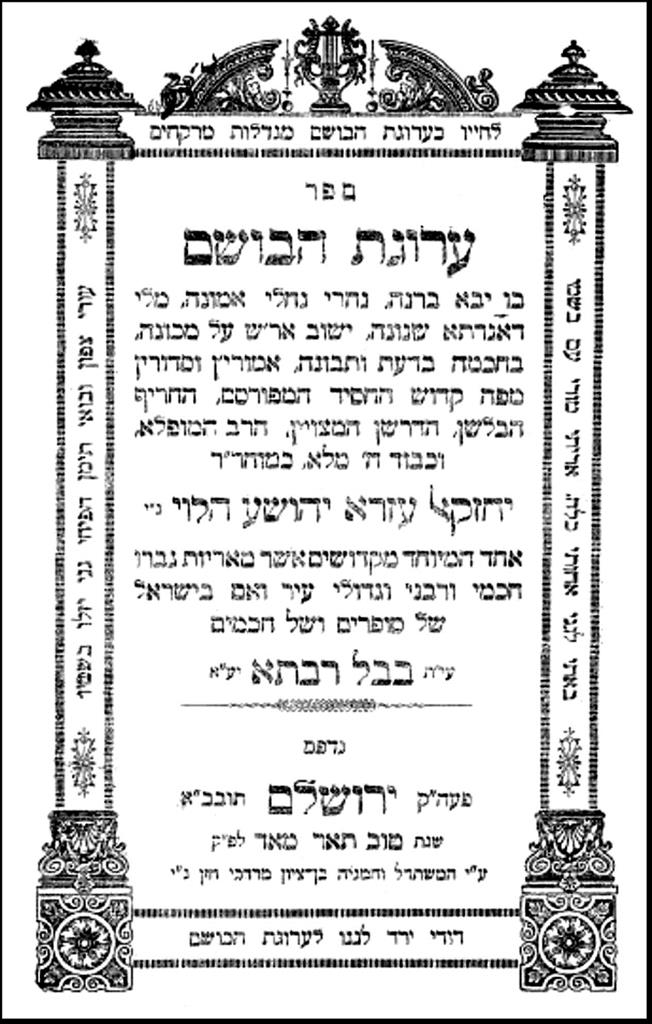 Harav Yechezkel Ezra Yehoshua Halevi was born in Baghdad, c. 5612/1852. As a bachur he learned in the Beis Zilchah beis medrash.

In 5649/1889, Rav Yechezkel was appointed to run the organization that collected funds on behalf of the poorer chassanim and kallos in Baghdad.

He moved to Eretz Yisrael in 5657/1897, settling in Yerushalayim. Ten years later, in 5667/1907, he and other Rabbanim founded Yeshivas Shoshanim L’David for the Iraqi kehillah. Rav Yechezkel traveled overseas a number of times on behalf of this yeshivah, including to Egypt. He was also the president of the committee of the Iraqi community in Yerushalayim.

In 5682/1922, Rav Yechezkel traveled on behalf of the local Iraqi community to Baghdad to solicit support for those who lived in Eretz Yisrael and to encourage more Iraqi Jews to move there.

He was known as a spellbinding darshan; many flocked to his weekly Shabbos afternoon drashos in Beit Knesset Shoshanim L’David.

Rav Yechezkel was the mechaber of numerous sefarim: Arugas Habosem on the Aggados of Shas; Tehillah V’Tiferes on Tehillim; Simchas Yom Tov on the Haggadah shel Pesach; Shiros V’Tishbachos, piyutim and poems; Minchas Ani, a mussar work; and others. Some of his works remain in manuscript form.

In 1066, William the Conqueror was crowned king of England.

In 1776, Gen. George Washington and his troops crossed the Delaware River for a surprise attack against Hessian forces at Trenton, New Jersey.

In 1868, President Andrew Johnson granted an unconditional pardon to all persons involved in the Southern rebellion that resulted in the Civil War.

In 1941, during World War II, Japan announced the surrender of the British-Canadian garrison at Hong Kong.

In 1989, ousted Romanian President Nicolae Ceausescu and his wife, Elena, were executed following a popular uprising.

In 1991, Soviet President Mikhail S. Gorbachev announced his resignation as the eighth and final leader of a communist superpower that had already gone out of existence.