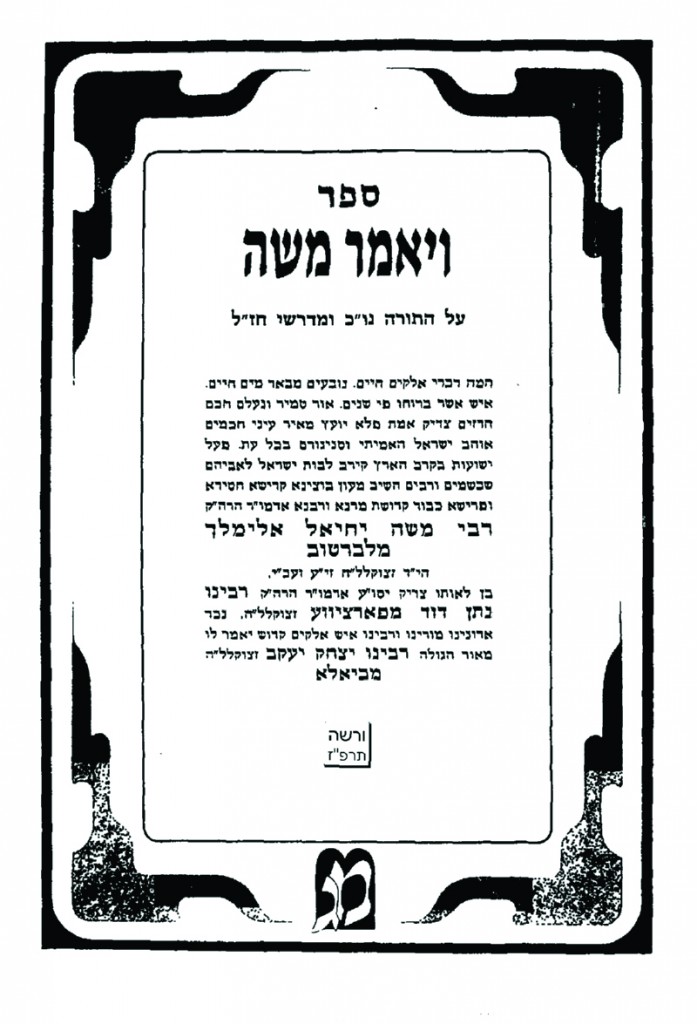 In 5550/1790, the Jews of Florence, Italy, miraculously escaped from a mob. A Purim was duly celebrated.

In 5701/1941, the Nazis began Operation Barbarossa, an attack on many Russian-occupied territories that were home to over 1.5 million Jews. The radio blasted messages inciting the local population against the Jews, and flyers were distributed urging them to kill the Jews even before the Nazis arrived.

When the Romans discovered him teaching Torah, they wrapped him in a Torah scroll, piled bundles of twigs around him, and before setting him afire placed damp woolen cloth on him to prolong the agony of being burned to death.

Harav Moshe Yechiel Elimelech Rabinowitz, born in 5655/1895 in Biala, was the son of Harav Nosson Dovid of Partzova, who was the son of the Divrei Binah of Biala. His mother was the daughter of Harav Yechiel Yaakov of Kozhnitz; she passed away when he was a young child.

He was zocheh to be brought up by his grandfather, the Divrei Binah, until the age of 10. He dedicated himself to learning, despite the trials of being a young orphan and suffering from hunger.

At the age of 16, Reb Moshe Yechiel married the daughter of Harav Yisrael Shapira of Grodzinsk, the Emunas Yisrael.

He began printing his sefarim shortly after he married, some written when he was just 13 years old. He continued to write all his life, even after he became a Rebbe. Many of his sefarim are based on the works of the Maharal and his depth of thought.

Following the petirah of his father on 7 Shevat 5690/1930, Reb Moshe Yechiel was appointed Rebbe. He settled in Levertov, a suburb of Lublin. (His brother, Harav Baruch Yerachmiel, was Rebbe in Munkacz.)

His court attracted many chassidim. Reb Moshe Yechiel put special kochos into the youth, even those who had already distanced themselves from Chassidic ways.

Among his noted chassidim was Harav Shimon of Zelichov, the famed Mashgiach in Yeshivas Chachmei Lublin. Although Reb Shimon was many years older than the Rebbe, he was totally devoted to him and even sent his talmidim to him.

Reb Moshe Yechiel was known for mofsim, and many petitioners came to him for yeshuos.

When the Nazis reached Levertov, they first sought to kill the Rabbanim, as usual. Reb Moshe Yechiel fled to Lublin, just ahead of the Nazis; there, his wife took ill and passed away. After he got up from shivah, Reb Moshe Yechiel decided to move to his summer home at Demtchaba, which was then under Russian rule. He stayed there for nearly two years, until that city, too, was taken over by the Nazis.

On Motzoei Shabbos Parashas Shelach, 27 Sivan, Reb Moshe Yechiel was eating melaveh malkah with his children by the light of a dimmed candle. The Rebbe’s gabbai, who had left for a few minutes to tend to something, was shocked upon his return to find the Rebbe and his children brutally murdered. The Nazis had suddenly barged into the house and shot them all dead. Hashem yinkom damam.

Reb Moshe Yechiel was 46 at his death. His children killed along with him were his sons Reb Yitzchak and Reb Chaim, and his daughter Reizel.

Many of his manuscripts were lost or burned during the war.

In 1876, Lt. Col. George A. Custer and his 7th Cavalry were wiped out by Sioux and Cheyenne Indians in the Battle of the Little Bighorn in Montana.

In 1950, war broke out in Korea as forces from the communist North invaded the South.

In 1962, the U.S. Supreme Court, in Engel v. Vitale, ruled 6-1 that recitation of a state-sponsored prayer in New York State public schools was unconstitutional.

In 1973, former White House Counsel John W. Dean began testifying before the Senate Watergate Committee, implicating top administration officials, including President Richard Nixon as well as himself, in the Watergate scandal and cover-up.

In 1993, Kim Campbell was sworn in as Canada’s 19th prime minister, the first woman to hold the post.