This Day In History 26 Tammuz/July 20

In 5519/1759, the Baal Shem Tov and Harav Chaim Hakohen Rappaport of Lemberg, on orders of that city’s bishop, debated the heretical Frankists. By winning the debate, they prevented the Talmud from being burned. A Yom Tov is celebrated in some chassidic courts to commemorate this event. 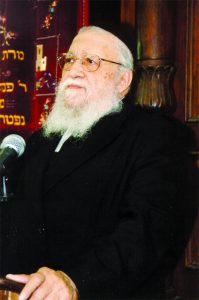 Harav Nachman Bulman’s parents, Rav Meir and Ettel, were Gerrer Chassidim who immigrated to America from Europe. They received a brachah from the Imrei Emes of Ger, zt”l, and on 22 Teves 5685/1925, Rav Nachman was born.

One of the few American boys of those days to receive a yeshivah education, he basked in Gerrer Chassidus and later became a devoted follower of the Modzitzer Rebbe, Harav Shaul Yedidyah Taub, zt”l. He remained close to the Modzitzer Rebbes until his petirah.

Rav Bulman had offers to officiate in the most prestigious shuls in America, but many did not have mechitzos that conformed to his non-compromising standards. So he and his Rebbetzin, Shaindel, moved to the tiny community of Danville, Virginia, whose shul had an upstairs women’s gallery.

When Rosh Hashanah arrived, Rav Nachman was horrified to discover that instead of the women using the gallery, the congregants had erected a mechitzah much lower than halachically acceptable in the main shul. In response to Rav Nachman’s demand, a better, makeshift mechitzah was set up, but some women remained outside in protest.

After leining, Rav Bulman addressed the mispallelim. “This is probably the last time I’ll be davening with you, but before I leave I want you all to understand the meaning of a shul and its sanctity.” He proceeded to deliver a fiery drashah on the subject.

From 5717/1957 to 5722/1962 he led the Adath Jeshurun Synagogue in Newport News, Virginia. Young servicemen from the nearby nuclear research base were often his Shabbos guests, and many became shomrei mitzvos through his influence.

Rav Bulman’s next position was in the West Bronx, where he served from 5722/1962 to 5727/1967. Deciding American Jewry needed to have an articulate voice of its own in English, he helped found The Jewish Observer and wrote many articles under various pseudonyms.

In 5735/1975 Rav Nachman realized his dream to live in Eretz Yisrael and settled in Sanhedria, Yerushalayim. Shortly thereafter, he became the Mashgiach of Yeshivas Ohr Somayach, where he taught and inspired countless people.

One of Rav Bulman’s cherished dreams was to lead a community that would serve as a magnet for American olim. In 5739/1979, he founded the Torah community of Kiryat Nachliel in Migdal Ha’emek; he lived there until 1993. Two years before his petirah, Rav Bulman moved to Neve Yaakov, in northeast Yerushalayim, where he founded the Nachliel beis medrash.

Rav Nachman was niftar on 26 Tammuz; his levayah was held in Yeshivas Ohr Somayach.

In 1871, British Columbia entered the Confederation as a Canadian province.

In 1917, America’s World War I draft lottery began as Secretary of War Newton Baker, wearing a blindfold, reached into a glass bowl and pulled out a capsule containing the number 258 during a ceremony inside the Senate office building. (The drawing of numbers by various officials continued until shortly after 2:00 a.m. the next day.)

In 1944, an attempt by a group of German officials to assassinate Adolf Hitler with a bomb failed as the explosion only wounded the Nazi leader.

In 1954, the Geneva Accords divided Vietnam into northern and southern entities.