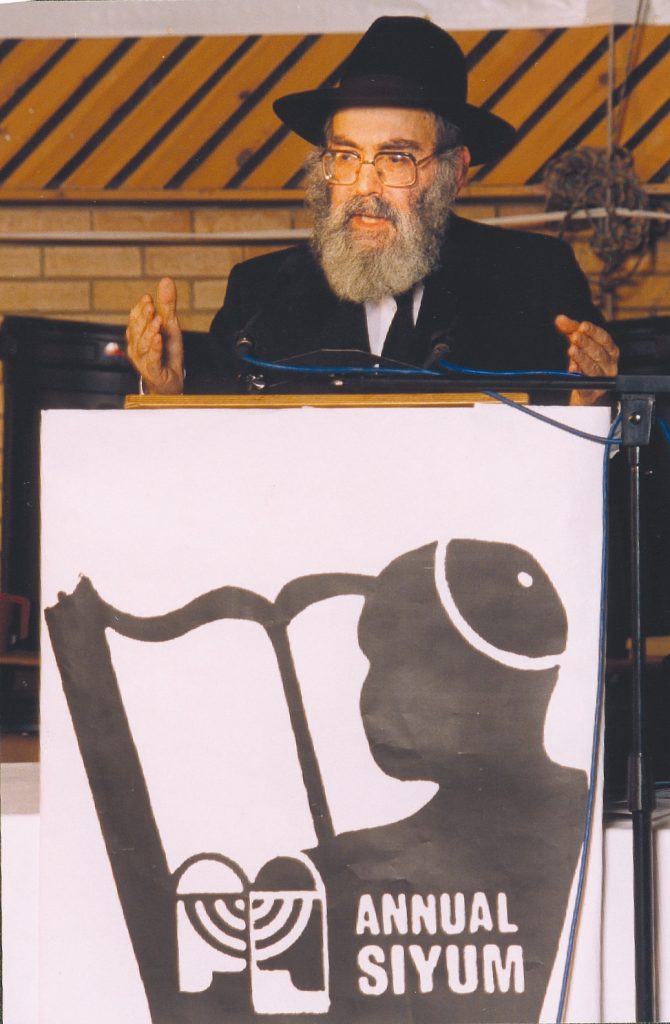 Harav Chaim Shaul Kaufman was born in Berlin just before the outbreak of World War II. His father, Rav Moshe, moved the family to Gateshead when Chaim Shaul, the youngest, was two years old.

As a child, Chaim Shaul became known as an exceptional masmid.

In his twenties he went off to Lakewood where he spent several months learning and attending the shiurim of Harav Aharon Kotler, zt”l.

During this period he married his Rebbetzin, the former Leah Nagel. They had two daughters and a son.

In Elul 5735/1975, Rav Chaim and, ybl”c, the Rosh Yeshivah, Harav Ezriel Yaffeh, founded Yeshivas Tiferes Yaakov in Gateshead, and Rav Chaim taught there for the next 30 years.

Rav Chaim served as an example of Torah, tefillah and gemilus chassadim for his thousands of talmidim. He provided secretly for many in need, and had a friendly word for everyone.

Devoted to his talmidim, Rav Chaim was willing to spend hours and hours listening to them and advising them, with patience and never a stern word.

Gaining wide renown as a gifted speaker, he was regularly invited to speak around the world.

At the last siyum of the Daf Yomi cycle, despite his poor state of health, he spoke both in the U.S. and at large gatherings in England and in Eretz Yisrael.

The close connection Rav Chaim maintained with Gedolei Torah and Chassidus are well known. Rav Chaim once traveled by boat to Eretz Yisrael with the Satmar Rebbe, zy”a, to be able to spend time with him. He was also very close to the previous Rachmastrivka Rebbe, zy”a.

His pilpulim were written down by talmidim and later compiled into Rav Chaim’s two-volume work, Mishchas Shemen. They are organized according to the order of parshios hashavua.

Lucid until his final moments, Rav Chaim was honored as chassan Torah on his last Simchas Torah. A sefer Torah was brought to his home, and he was given an aliyah. The following day, 24 Tishrei 5766/2005, he was niftar.

Rav Chaim’s levayah set out from his home to the Gateshead yeshivah, from where it continued to Manchester and London.

In 1958, Pan American Airways flew its first Boeing 707 jetliner from New York to Paris, in 8 hours and 41 minutes.

In 1972, national security adviser Henry Kissinger declared, “Peace is at hand” in Vietnam.

In 1994, Prime Minister Yitzchak Rabin of Israel and Prime Minister Abdel Salam Majali of Jordan signed a peace treaty during a ceremony at the Israeli-Jordanian border attended by President Bill Clinton.