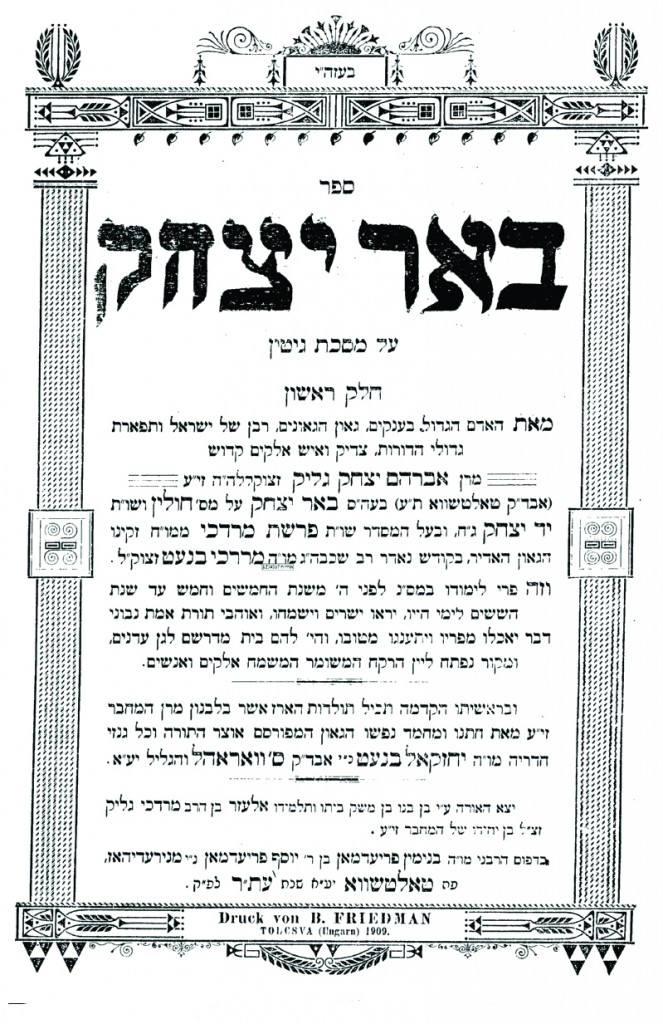 Harav Avraham Yitzchak Glick was born in 5586/1826, in the village Wieretsh, near Debrecen, Hungary.

His parents’ previous children had passed away in their youth, so when this son was born, his father, Rav Shammai, and
his mother accepted upon themselves to fast every Monday and Thursday, hoping that in that zechus Hashem would grant their son a long life, and that the boy would grow up to be a yerei Shamayim and a lamdan.

In 5606/1846, when Reb Avraham Yitzchak was already known as a talmid chacham and lamdan, he was taken as chassan by Harav Yeshayah Bannet of Kalov. He was the son of Harav Mordechai Bannet of Nikolsburg.

For the next three years, Reb Avraham Yitzchak lived in the home of his father-in-law, dedicating himself to Torah, unhindered by worldly issues.

Many kehillos asked Reb Avraham Yitzchak to serve as their Rav, but he declined. His father-in-law had given him a few buildings that enabled him to support himself without needing to accept a position.

A few years later, Reb Avraham Yitzchak lost all his properties, including his own house, to a devastating fire. He was thus forced to take up a Rabbinical post.

He took the position of Rav of Toltchova, where he also headed a yeshivah. He was Rav there for nearly 50 years.

Reb Avraham Yitzchak was known as a tremendous masmid who did not waste a second of his time.

Reb Avraham Yitzchak had an only son, Rav Mordechai, who was a talmid chacham and wrote the sefer Chatzar Hamelech on the Rambam. Tragically, Rav Mordechai passed away during the lifetime of his father.

His two sons-in-law were Harav Avraham Halevi Jungreis, the son of the Menuchas Asher (who was also niftar during the life of his father-in-law), and Harav Yechezkel Bannet, Rav of St. Warrell.

In 1863, during the Civil War, Confederate Gen. Thomas “Stonewall” Jackson was accidentally wounded by his own men at Chancellorsville, Va.; he died eight days later.

In 1890, the Oklahoma Territory was organized.

In 1945, the Soviet Union announced the fall of Berlin, and the Allies announced the surrender of Nazi troops in Italy and parts of Austria.

In 1963, the Children’s Crusade began in Birmingham, Ala., as more than 1,000 black schoolchildren skipped classes and marched downtown to protest racial segregation; hundreds were arrested.

In 1972, a fire at the Sunshine silver mine in Kellogg, Idaho, claimed the lives of 91 workers who succumbed to carbon monoxide poisoning.

In 2011, after a decade on the run, Osama bin Laden was killed by elite American forces at his Pakistan compound, then quickly buried at sea.