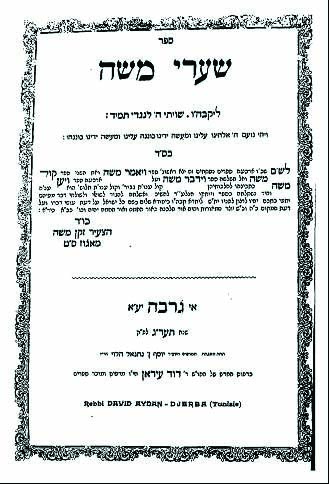 5669/1909, Harav Avraham Yitzchok Glick, zt”l, Rav of Toltchova and mechaber of Be’er Yitzchok and other sefarim

Harav Moshe Zakan Mazuz was one of Djerba’s foremost Torah leaders. He learned under Harav Chaim Hakohen, zt”l, the mechaber of Lev Shomea.

From a young age, Harav Moshe Zakan wrote sefarim on a wide array of Torah topics.

Harav Moshe Zakan was known for his psakim, which are cited and relied on even today.

In his later years, he studied Kabbalah.

Among his sefarim, some were published during his lifetime, others after his petirah.

They include Shaarei Moshe, his halachic rulings and she’eilos u’teshuvos; Shaarei Torah, pilpulim on the Torah and Shas; Sever Panim, chiddushim on Shas and the Rambam, and others.

In 1492, a contract was signed by Christopher Columbus and a representative of Spain’s King Ferdinand and Queen Isabella, giving Columbus a commission to seek a westward ocean passage to Asia.

In 1895, the Treaty of Shimonoseki ended the first Sino-Japanese War.

In 1941, Yugoslavia surrendered to Germany during World War II.

In 1970, Apollo 13 astronauts James A. Lovell, Fred W. Haise and Jack Swigert splashed down safely in the Pacific; four days after a ruptured oxygen tank crippled their spacecraft while en route to the moon.