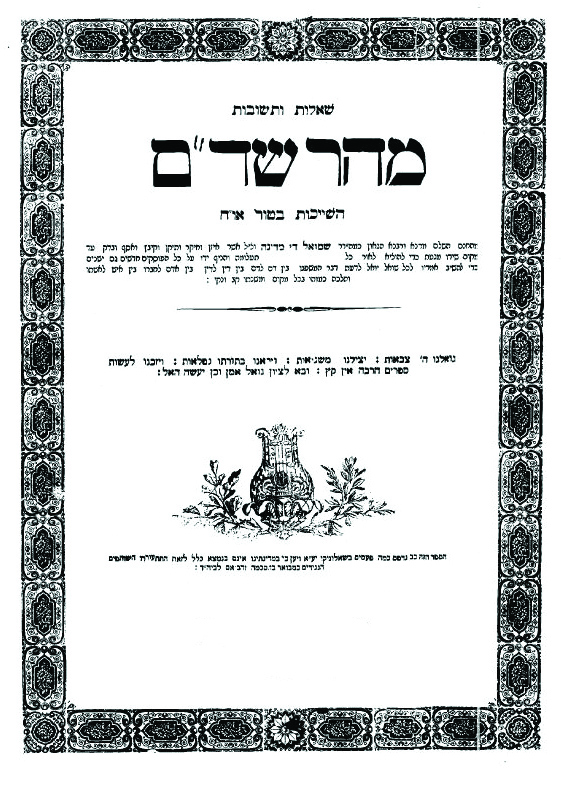 5700/1939, the famed yeshivah of Mir was forced to close after 124 years of inspiring generations of bnei Torah. Many Mirrer talmidim fled, and with great nissim survived the war years in Shanghai.

Harav Shmuel di Modena was born in Salonika in 5266/1506. His father’s name is presumed to be Moshe, as that was the name Rav Shmuel gave his son.

Orphaned of his father as a child, Rav Shmuel was brought up by his mother and eldest brother.

He learned under Harav Yosef Taitchek and Harav Levi ben Chaviv, the Ralbach.

At 25, already a talmid chacham, Rav Shmuel was appointed Dayan in Salonika. Although young, he was esteemed by many of the generation’s leading Gedolim. Many she’eilos were addressed to him from across the spectrum of the Jewish world. He carried on halachic discussions with the Beis Yosef, the Radbaz and others, and was one of the leading poskim of his day.

During his tenure as Dayan in Salonika, Rav Shmuel also headed a yeshivah. Among the more famous of his talmidim were Harav Yosef ben Ezra, the mechaber of Atzmos Yosef on Kiddushin, and Harav Avraham di Biton, the Lechem Mishneh.

Rav Shmuel suffered many tribulations. His two sons-in-law were niftar in his lifetime, and the responsibility of raising their young orphans fell on him. Later on, his elder brother, who supported the family, was also niftar, leaving Rav Shmuel with more young orphans to tend to. But Rav Shmuel still devoted himself to Torah day and night, even with all his family responsibilities.

On 2 Cheshvan 5350/1589, at the age of 84, Rav Shmuel was niftar. In his humility, he asked that no elaborate titles be written on his matzeivah.

His only son, Rav Moshe, was appointed Rav in Portugal after the petirah of his father.

In 1970, Salvador Allende was inaugurated as president of Chile.

In 1986, the Iran-Contra affair came to light as Ash-Shiraa, a pro-Syrian Lebanese magazine, first broke the story of U.S. arms sales to Iran.