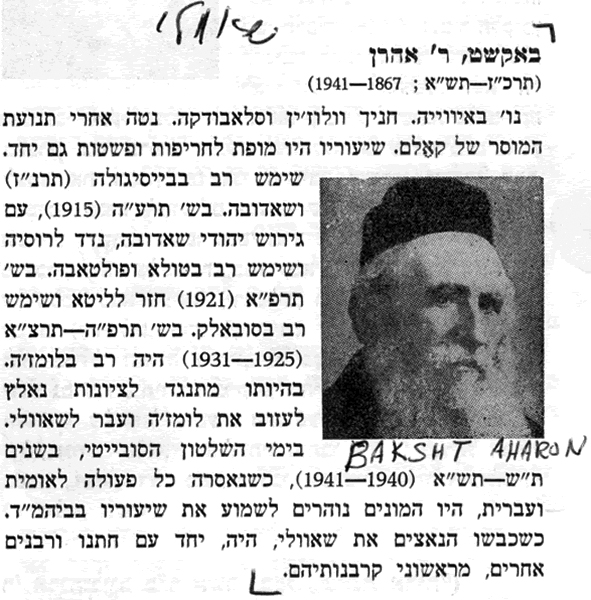 In 2449/1312 B.C.E., the egel (golden calf) was formed by the erev rav. Assuming that Moshe Rabbeinu would not return, they turned to Chur, the son of Kalev and Miriam, and asked him to make an idol. When he did not agree to do so, he was killed. Aharon Hakohen, realizing that he would share a similar fate, attempted to delay them, albeit in vain.

2449/1312, B.C.E., Chur, son of Kalev ben Yefuneh and Miriam Haneviah, was killed by the erev rav for his protest against making the egel.

Harav Aharon Yosef was born in Ivye in 5627/1867. As a bachur he studied in Volozhin and Slabodka. While in Volozhin, he caught the eye of Reb Itzele Peterburger, a disciple of Harav Yisrael Salanter, founder of the Mussar movement.

Reb Itzele introduced Rav Aharon to the derech hamussar. He was known as a giant in Torah and Mussar throughout his life. Eventually he moved to Kelm, where he became attached to Harav Simchah Zissel Ziv. He eventually married Sarah Rivkah Levin from the town of Shavel, in Lithuania.

Harav Aharon served as the Rav in Lomza, among other places, and in no fewer than 13 cities, including Baisagola, Semiatitz, Tzaritzin, Poltova, and Saduva, where he established a yeshivah. He later served as Rav in Lomza, and Suwalk. In 5690/1930 he became Rav of Shavel. Even under the Soviets (5700/1940–5701/1941) he kept teaching Torah, with many participants at his drashos.

During the Holocaust, he and his son-in-law, Rav Isaac Rabinowitz of Telshe, were among the first to be murdered when the Germans entered Shavel. He was, unfortunately, the last Rav in Shavel. Hy”d.

In 1587, an English colony fated to vanish under mysterious circumstances was established on Roanoke Island off North Carolina.

In 1862, President Abraham Lincoln presented to his Cabinet a preliminary draft of the Emancipation Proclamation.

In 1957, Walter “Fred” Morrison applied for a patent for a “flying toy,” which became known as the Frisbee.