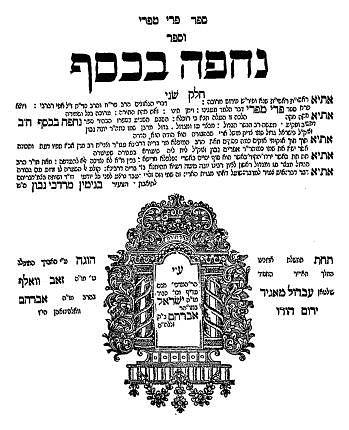 In 5701/1941, a torpedo, apparently fired accidentally by a Soviet submarine, sank the Struma, a cattle boat on which 769 Romanian Jews were attempting to flee to Eretz Yisrael during World War II.

The ship was badly overcrowded and lacked the basic necessities; even its engine barely worked.

The trip’s organizers had misled the passengers, and upon reaching Istanbul they discovered that they did not have the visas they had been promised that would permit them to enter Eretz Yisrael.

The Turkish government first quarantined the ship and its passengers, and later forced it into open water, which led to its sinking. Only one person survived.

Harav Yonah Navon was born in 5473/1713 in Yerushalayim. His father, Harav Chanoun, was one of the Gedolei Yerushalayim and a Dayan in the city.

Rav Yonah toiled in Torah all his life, despite the dire poverty in which he and his family lived.

As a bachur, he learned in Beis Medrash Beit Yaakov under Harav Yisrael Meir Mizrachi, the author of Pri Ha’aretz, who wrote of him, “A talmid who enlightens his rebbi.”

At the age of 19 he was appointed Rosh Yeshivah of Yeshivat Gedulat Mordechai, founded and supported by the nagid Harav Mordechai Taaluk. He also taught in Yeshivat Yefaer Anavim.

Even under these new conditions, Rav Yonah still could not make ends meet, so he was forced to leave Eretz Yisrael for Italy. There he found members of his father’s family, who gladly supported him. Thus Rav Yonah was able to publish his halachic responsa in the sefer Nechpah Bakessef.

Rav Yonah also authored the sefer Get Mekushar, his explanations on the sefer Get Pashut of Harav Moshe ibn Chaviv; and Pri Mipri, to refute the questions on the Pri Chadash raised by the Pri Toar and the Simlah Chadashah.

Rav Yonah taught many talmidim during these years; among the better-known ones were Harav Chaim Yosef David Azoulai, the Chidah; Harav Pinchas Yosef Mizrachi, the son of the Pri Ha’aretz; and Harav Refael Chaim Sorangah.

In his Shem Hagedolim, the Chida writes of Rav Yonah: “My teacher Rav Yonah, one of the Rabbanim in Yerushalayim — there was nearly no posek like him in our region. He was a chassid and a mekubal. Due to the sins of the generation, he was plucked from our midst at the age of 47.”

Rav Yonah made numerous trips on behalf of Yerushalayim’s inhabitants.

Rav Yonah was niftar on 16 Shevat 5520/1760. He was survived by three sons: Harav Efraim, Harav Binyamin and Harav Mordechai, all talmidei chachamim.

In 1783, Sweden recognized the independence of the United States.

In 1937, President Franklin D. Roosevelt proposed increasing the number of U.S. Supreme Court justices; the proposal, which failed in Congress, drew accusations that Roosevelt was attempting to “pack” the nation’s highest court.