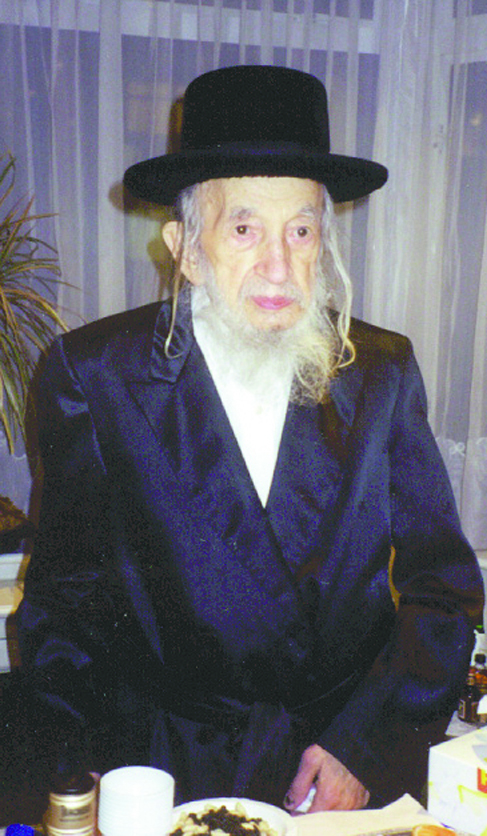 In 5318/1558, Germany’s kaiser restricted certain rights that had previously been given to the Jews by the government.

In the years between the wars, a number of Rebbes made their homes in London. The first of them was Harav Chanoch Henoch Dov Rubin, zy”a, of Sassov.

His son, Harav Simchah, had been born in Sassov, a town near Lvov, in 5670/1910. Scion of an outstanding chassidic family, he came to London with his parents and siblings in 1925, when his father established a beis medrash in Whitechapel.

Harav Henoch, a man of outstanding piety, treated all Jews with warmth and was beloved for his charity, simplicity and humility — all qualities which were fully reflected in his son, Harav Simchah.

Tragically, Harav Henoch was niftar suddenly in 5689/1929 after a short illness, leaving a devastated community. In accordance with his wish, his eldest son, Harav Simchah, succeeded him as Sassover Rebbe of London.

In 5690/1930 Harav Simchah married the daughter of Harav Dov Heschel of Lvov, a descendant of the Ohev Yisrael of Apta.

Harav Simchah worked with a small group of his contemporaries, including the Rebbes of Premishlan, Biala, Shotz, Trisk and Dzikov, with whom he had a warm relationship. They dealt with the harsh economic conditions of the prewar years, with their attendant problems of maintaining traditional standards of Chassidus and Yiddishkeit; from the 1930s onward they dealt with the flood of refugees fleeing the gehinnom of Hitler’s Europe.

In 5702/1942 the Rebbe moved with his young family to North West London, where he established the present Sassover beis medrash at Helenslea Avenue, Golders Green. In 5717/1957 the shul became the home of the first yeshivah in North West London, after Harav Simchah encouraged Rabbi Eliezer Warhaftig, zt”l, and his colleague Rabbi Rakow, zt”l, to open Yeshivas Chayei Olam with its first two students.

During the war years, the Sassover Rebbe worked tirelessly, helping destitute refugees who found safety in his country with food, lodging and parnassah. He took young orphans into his own home, and established a hostel for others to ensure that in addition to their physical survival, they received the warmth and kindness that they needed so badly.

The Rebbe placed some 300 boys and young men on a farm near London, providing these shattered, traumatized Yidden with a safe Jewish environment.

The Rebbe also introduced or strengthened standards of kashrus in many Jewish old-age and nursing homes, and arranged kosher food for Jewish patients in state hospitals and nursing homes. Not only did he undertake personal supervision, but on numerous occasions, even provided the additional funding necessary to pay for these facilities.

He was a major baal tzedakah who was determined to remain anonymous to the recipients of his funds and arranged with his bank to issue him checkbooks with no identifying name or institution imprinted on them, thereby fulfilling the highest level of tzedakah — mattan b’seisser.

His acts of gemilus chassadim benefited people of all ranks.

The Rebbe’s lifelong commitment to the maintenance of the highest standards of tznius was legendary. Each year, with the approach of the summer, he would write a message in the heimishe newspapers in English — including Hamodia, of which he was an early and strong friend and supporter — reminding Yidden of the import to maintain these standards during this time, whether at home or abroad.

The Rebbe was regular visitor to all the local mosdos, leaving an indelible impression on these young neshamos.

Following the petirah of his Rebbetzin, the Rebbe married Rebbetzin Minna Weber; she passed away a few years before he did.

Despite many disappointments, Harav Simchah, even during his twilight years when he suffered from poor health, continued his chessed activities to his last days, and accepted all his suffering b’simchah.

In 1940, during World War II, Norway decided to surrender to the Nazis, effective at midnight.

In 1969, the Senate confirmed Warren Burger to be the new chief justice of the United States, succeeding Earl Warren.