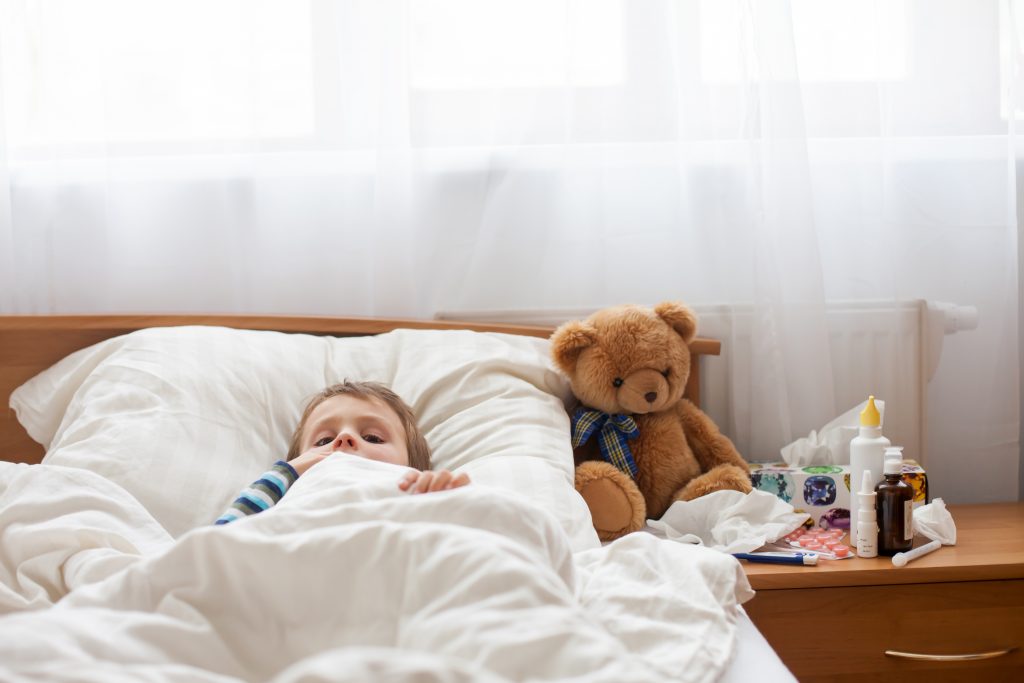 Many kids relish missing school for a low-grade fever or a minor cold. All three of my children have enjoyed sick days curled up under a big blanket. But this time, when strep hit my oldest hard, he was desperate to get better yesterday. He had already missed a month of sports because of a broken wrist and was determined not to miss another day on the court.

When my children get sick, usually they just want to sleep. This time, however, once his strep test came back positive, my eldest started begging me for anything that would get him back onto the basketball court as soon possible. This is what I told him to do.

This is especially important after a high fever. Liquids will wash bacteria and viruses from the throat and through the digestive tract. Liquids will also replenish a body dehydrated by excess sleep. I gave my son water and warm tea to drink, as well as plenty of grapes, pineapple, cucumbers and other water-heavy fruits and vegetables that promote rehydration. Soups, teas, bone broth and smoothies are equally as hydrating.

My son asked if I would buy him a Gatorade, because, “You know Mom, I’ve lost a lot of electrolytes.” But I reminded him that added sugar can suppress the immune system by lowering our white blood cells’ ability to engulf bacteria. The strep had already taxed his immune system, so he wouldn’t want to compromise it again by funneling sugar; he needed to get it firing on all cylinders as soon as he could. I suggested coconut water as a more natural electrolyte beverage. He didn’t ask for an iced vanilla latte, but I also reminded him that caffeine dehydrates cells.

This is key if your child has been taking antibiotics, which shoot to kill bacteria in the body and gut and do not necessarily discriminate between good bacteria and bad bacteria. A round of antibiotics for strep or another illness can leave the gut stripped of the healthy bacteria we need for digestion and well-being. It is essential to rebuild this bacteria quickly. There are many good probiotic supplements on the market, one of which I gave my son for a few weeks after his course of antibiotics was over, but foods such as kimchi, miso, kombucha and sauerkraut also do the job of delivering good bacteria directly into the digestive tract. Miso soup is an ideal first food after illness.

Garlic, onions, artichokes, avocado and cider vinegar also act as nourishment for the good bacteria in our digestive tract. They complement the probiotics by creating the environment for the probiotics to thrive. Most winter soup recipes include onions and garlic, so I whipped up a soup for my son.

After illness, kids often lack energy because they’ve taken in limited protein and calories while sick. High-quality, easily digestible protein such as salmon or lean chicken can provide needed energy. Bone broth is especially powerful, because it delivers protein, collagen, minerals and nutrition in an absorbable, operational form. This can increase energy, boost the immune system and rebuild a damaged gut lining. You can drink it straight with a dash of pepper, or you can make soup with it, or as I did for my son, boil rice in bone broth for another good first food after illness.

Hot peppers can help clear nasal congestion. But for children recovering from a digestive illness, stick to bland foods. A little bit of crushed ginger can be added to anything, including baked goods, to help with digestion, give the food a little extra flavor and the patient extra immunity. I added some to my son’s smoothie.

It is best to eat smaller, more frequent meals to ease your body back. A fruit and vegetable smoothie is a faultless first breakfast. I added a banana to my son’s smoothie to provide potassium for cell hydration and soluble fiber to get his system moving again.

This is how we regain lost energy and how our bodies repair.

It clearly helps to have a willing patient, because two days after embracing a few of the things on this list, my guy was off the couch and back in business. Now, let’s hope nobody else in my family gets it.