Six Homeless Shootings, Three in Washington, D.C. and Three in NYC, May Be Connected 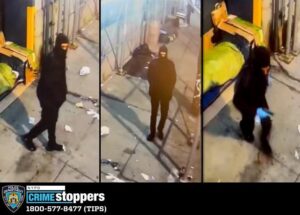 Agents of the NYPD, D.C. Metropolitan Police and the Federal Bureau of Alcohol, Tobacco, Firearms and Explosives are exploring the possibility that six shootings of homeless people over the past two weeks may have been committed by the same assailant. Ballistics found at the two scenes in NYC on Saturday morning matched the caliber as casings found in Washington, DC, sources said.

The DC Police Department and the AFT have teamed up to offer a reward of $45,000 for information leading to the arrest of the suspect in the D.C. shootings.

The New York shootings began Sunday morning, March 13, at 5:00 a.m. when a homeless 38-year-old man who was sleeping in front of 54 King St. was shot.

“The victim woke up … screaming: ‘What are you doing?’” NYPD Deputy Chief Hank Saunter said.

The assailant fled the scene after shooting the victim in the arm. He is listed in stable condition at Bellevue Hospital.

Approximately one hour later, police surveillance video recorded an assailant, hooded and wearing all black with blue gloves, casually approached a man sleeping in a green sleeping bag in front of 148 Lafayette Street. After kicking the sleeping man, he checked to see if anyone was watching and shot him in the head at point-blank-range. The killer then fled the scene.

A third victim was discovered inside of a sleeping bag outside of a Chipotle restaurant at the corner of Greenwich and Murray streets in Tribeca at about 6:30 p.m. on Sunday evening. The police conducted a wellness check and found him alive about 6 a.m., but 12 hours later, a woman told police she thought the man was suffering from an overdose. While performing first aid, they spotted a bloody fatal wound. It was unclear if he was stabbed or shot.

A combined award of $10,000 was offered by CrimeStoppers and NYPD for information leading to an arrest in the NYC shootings.

At a press conference on Saturday night, Mayor Eric Adams described footage of the crimes as a “chilling” act of “cold-blooded murder,” and said the incidents were a “clear and horrific intentional act” targeting homeless individuals.

“Homelessness turning into a homicide. We need to find this person and we need New Yorkers to help us,” Mayor Eric Adams said at a Saturday night press conference.

“I believe [that’s what] makes this case so horrific, watching the video, watching the individual intentionally walk up to innocent people that are dealing with the challenges of homelessness – and it’s quite possible that one of our citizens is still alive merely because he woke up,” Adams said.

“Our communities in DC and New York City are heartbroken and disturbed by these heinous crimes in which an individual has been targeting some of our most vulnerable residents. The two of us spoke about how our teams can coordinate and help one another, and we are calling on everyone in our cities to look at the images of the suspect and report any information, however small, that may be useful. The work to get this individual off our streets before he hurts or murders another individual is urgent. The rise in gun violence has shaken all of us and it is particularly horrible to know that someone is out there deliberately doing harm to an already vulnerable population.

“As our law enforcement agencies work quickly with federal partners to locate the suspect, we are also calling on unsheltered residents to seek shelter. Again, it is heartbreaking and tragic to know that in addition to all the dangers that unsheltered residents face, we now have a cold-blooded killer on the loose, but we are certain that we will get the suspect off the street and into police custody.”