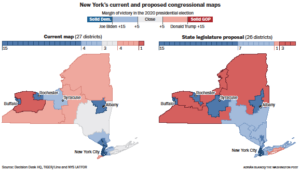 Democratic state legislators in New York released a congressional redistricting map Sunday that redrew House lines to give Democrats as many as three more seats at a time when the party’s majority is in jeopardy.

The New York map is the latest redistricting win for Democrats who had been expected to suffer at the hands of Republican state legislatures that control map-drawing in many more states. But maps in two of those states, Ohio and Alabama, have already been struck down by the courts. In a third Republican state, Texas, the Justice Department has sued over lines it said discriminated against Latinos.

So far, in more than two dozen maps passed around the country, Democrats would net an additional five districts that Joe Biden would have won in 2020. The New York map, which is expected to be voted on this week and signed by Democratic Gov. Kathy Hochul, would bring that up to eight seats. As redistricting began last year, Republicans hoped to gain at least enough seats to overcome the current 10-member advantage held by Democrats.

Democrats are not guaranteed wins in those districts in November. The party in the White House has historically lost ground in midterm elections and turnout is generally much lower in non-presidential-election years.

The map made public Sunday would result in lines that would give Democrats 22 seats to four Republican ones. The New York delegation is currently 19 Democratic seats to eight seats for Republicans. The state lost a seat because of slow growth over the past 10 years.

The map erases the upstate seat held by Rep. Claudia Tenney, a Republican, and creates a deep blue district in the middle of the state.

The Brooklyn neighborhoods in GOP Rep. Nicole Malliotakis’s Staten Island-based district shift enough to turn it from one President Donald Trump won by 10 points to one Biden would have won by about the same amount. On Long Island, the seat held by Rep. Lee Zeldin, a Republican who is running for governor, also gets bluer.

From the beginning, New York loomed as the state where Democrats might be able to craft a map that helped the national hopes of the party. (Maps in California, the most populous Democratic state, are drawn by an independent commission.) Democrats now hold full control of New York state government for the first time in a century.

But to do so, lawmakers needed to make an end run around voters’ desires to blunt partisan gerrymandering. In 2014, New York voters approved a constitutional amendment to set up a separate entity outside the state legislature to control redistricting. The 10-member commission was split equally along partisan lines. Of the members, eight were appointed by partisan legislative leaders.

“I’m thrilled with the maps that have come down, they listened to the public input the commission received, and I think that’s reflected in these maps,” said David Imamura, the Democratic chairman of the redistricting advisory commission. “Having sat through every minute of the public hearings these maps reflect the input we received from the public.”

“These maps are the most brazen and outrageous attempt at rigging the election to keep Nancy Pelosi as Speaker,” tweeted Langworthy. “Voters spoke loud and clear in rejecting their partisan power grab last year and in 2014, but Democrats are circumventing the will of the people.”

State Sen. Mike Gianaris, a Democrat who chairs the legislative redistricting task force, defended the map against accusations that it was a partisan gerrymander.

“This map was carefully drawn to comply with all constitutional and statutory requirements,” he said. “New York is well known to be a solidly blue state, so it’s no surprise a fairly drawn map would yield results reflecting that reality.”

Days before state Democrats were set to release their congressional map, Rep. Sean Patrick Maloney, D-N.Y., the chairman of the House Democrats’ campaign committee, submitted a 12-page memo in the public comments to the redistricting commission that laid out a plan that would dramatically improve the party’s chances in November.

The map envisioned by Maloney, who is responsible for Democrats’ maintaining their House majority, would have given Democrats as many as 23 seats out of the state’s 26 seats.

“The Chairman’s priority is to ensure that the state of New York has a map that represents communities of interest so that every voter’s voice is heard in Washington,” DCCC spokesman Chris Hayden told The Washington Post in a statement. “The state’s public comment process is critical to a healthy democracy and the only venue for public comment, so as a citizen of the state Congressman Maloney chose to participate in that process.”

The map drawn by the Democratic state lawmakers ended up as slightly less aggressive than the one pushed by Maloney. Some experts think the Maloney map was intended to give the legislature cover in a court challenge to say they didn’t go as far as national Democrats would have liked.

“He’s setting up this marker. The legislature is already going to get pushback, how can he make it easier for them to do 22-4,” said a redistricting expert who works with Democrats, who spoke on the condition of anonymity to reflect internal party thinking.

Though the lawmakers’ map is drawn to the advantage of Democrats, it is likely to withstand a court challenge, said Jeffrey Wice, a law professor and senior fellow at New York Law School’s Census and Redistricting Institute.

The Ohio map, which benefited Republicans, was struck down by the state Supreme Court for ignoring a state constitutional amendment against partisan gerrymandering. The Alabama map was invalidated by a federal court for violating the Voting Rights Act.

“The state constitutional criteria were all followed, making it hard for a state court to reject it,” Wice said. “The proposed New York map is nothing like the partisan gerrymanders in Texas.”