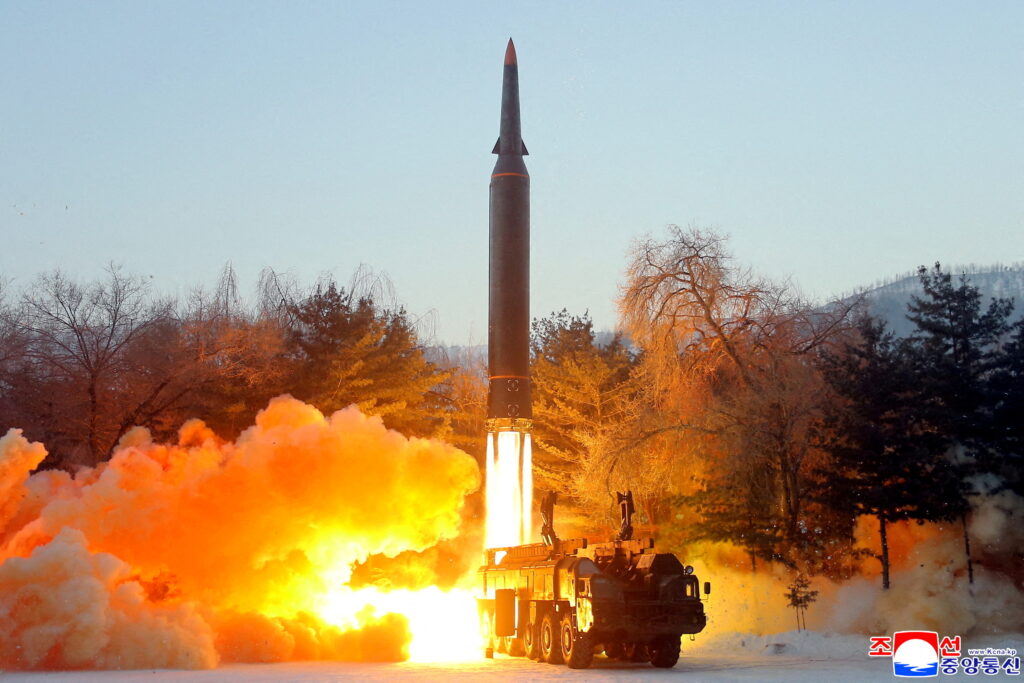 North Korea appeared to test fire a ballistic missile on Tuesday that may be more capable than the “hypersonic missile” it launched less than a week earlier, South Korea‘s military said, as Pyongyang pursues increasingly advanced weapons.

The launches underscored leader Kim Jong Un’s Jan. 1 vow to bolster the military with cutting-edge technology at a time when talks with South Korea and the United States have stalled.

“We assess that this is more advanced than the missile North Korea fired on Jan. 5, though South Korean and U.S. intelligence authorities are conducting detailed analysis,” the JCS said.

The suspected ballistic missile launch was detected around 7:27 a.m. (local time) from North Korea‘s Jagang Province toward the ocean off its east coast, the same location as last week’s test.

North Korea has joined a global race in developing hypersonic missiles, which are usually defined as weapons that reach speeds of at least five times the speed of sound – or about 6,200 kms per hour (3,850 mph) – and can maneuver at relatively low trajectories, making them much harder to detect and intercept.

“Today’s test might be intended to send a message to the South after authorities here said the earlier test was a failure and did not involve a hypersonic missile,” Kim Dong-yup, a former South Korea Navy officer who now teaches at Seoul’s Kyungnam University.

South Korea‘s National Security Council held an emergency meeting where members expressed “strong regret” that the missile test came at a time when regional stability is extremely important, and urged North Korea to resume dialogue and cooperation, the presidential Blue House said in a statement.

The U.S. military’s Indopacific Command (INDOPACOM) said that while it had assessed that launch did not pose an immediate threat to the United States or its allies, it “highlights the destabilizing impact of North Korea‘s illicit weapons program.”

“That North Korea continues to launch missiles is extremely regrettable,” he told reporters.

“These actions increase the risk of miscalculation and escalation and pose a significant threat to regional stability,” U.S. Ambassador Linda Thomas-Greenfield said in the statement on Monday. Such tests not only improve the North’s capabilities, but expands what it can offer illicit arms clients and dealers around the world, she added.

U.N. Security Council resolutions ban all ballistic missile and nuclear tests by North Korea, and have imposed sanctions over the programs.

However, China and Russia are pushing the U.N. Security Council to ease sanctions on North Korea by removing a ban on Pyongyang’s exports of statues, seafood and textiles, and lifting a refined petroleum imports cap.

Thomas-Greenfield reiterated calls for countries around the world to enforce sanctions, and for North Korea to return to talks and abandon its missiles and nuclear weapons.

North Korea has said it is open to talk, but only if the United States and others drop “hostile policies” such as sanctions and military drills.

Few observers expect Kim to ever fully surrender his nuclear arsenal and North Korea argues its missile tests and other military activities are similar to measures taken by other countries.

Leif-Eric Easley, a professor of international studies at Seoul’s Ewha University said North Korea is attempting to use repeated tests to normalize its missile capabilities and military programs, portraying it as engaged in incremental improvements for self-defence like many other countries.

“At the same time, Pyongyang is challenging international sanctions, testing what it can get away with while the United Nations Security Council remains divided,” he said.