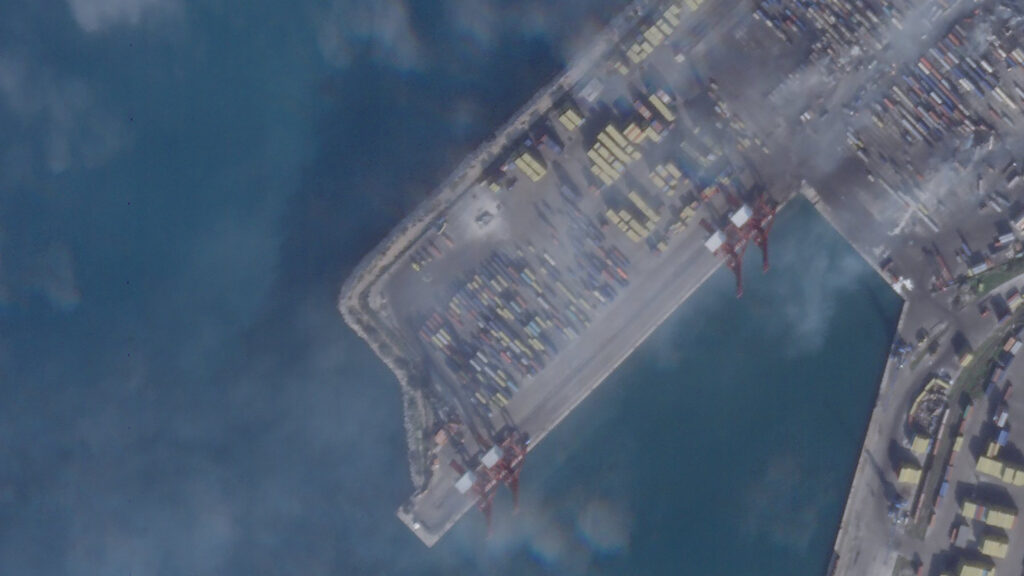 Satellite images taken this week over the Syrian port of Latakia show the smoldering wreckage after a reported Israeli missile strike, hours after firefighters contained a massive blaze.

The raid launched from the Mediterranean Sea Tuesday was among the biggest launched by Israel into Syria, igniting a fire in the container terminal that raged for hours and caused significant material damage in the vicinity. It damaged a nearby hospital and offices, and also shattered windows of residential buildings and cars parked in the area near the port. The explosion could be heard miles away.

It was the second such attack on the facility this month.

The Latakia seaport handles most of the imports to Syria, a country ravaged by a decade-old civil war and Western-imposed sanctions. Another attack took place Dec. 7, when Syrian media reported Israeli warplanes hit the container terminal, also igniting a major fire.

Satellite photos obtained by The Associated Press from Planet Labs PBC Thursday showed heavy smog over the container terminal on Wednesday, likely from the struck container still smoking. The images suggest it was a high-precision strike that appeared to hit one container.

A Syrian military official said the Israeli missiles were fired from the sea, west of Latakia, hitting the terminal and igniting fires. Maj. Mohannad Jafaar, head of the Latakia fire department, said 12 fire trucks worked for hours to contain the blaze. He said the containers that were hit held spare auto parts and oil but there were no casualties.

The Israeli military, which rarely comments on individual attacks or discusses details of such operations, declined to comment on the reported strike.

Israel says it targets bases of Iran-allied militias, such as Lebanon’s militant Hezbollah group, which has fighters in Syria. It says it attacks arms shipments believed to be bound for the militias.