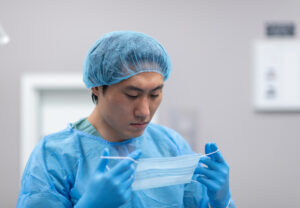 New York is shortening the amount of time essential workers must stay home after testing positive for COVID-19, Gov. Kathy Hochul said Friday, seeking to strike a balance between public health and keeping critical jobs as fully staffed as possible.

Hochul announced the change at a news conference in Albany where she also went on an offensive against her coronavirus critics, insisting that the state acted early and has done everything it could against the rapid spread of the omicron variant.

Under the new guidelines, fully vaccinated people working in health care and other frontline fields can return to work after five days, instead of 10 days, if they aren’t showing symptoms or their symptoms are resolving, Hochul said.

They must not have had a fever for 72 hours, can’t be taking medication and must wear a mask while on the job, Hochul said.

The state’s revised guidance is similar to that of the U.S. Centers for Disease Control and Prevention, which said Thursday that health-care workers will be able to return to work after seven days if they test negative and don’t have symptoms and after five days, or even fewer, if there are severe staffing shortages.

Even as the state set a one-day record with 44,431 new cases on Thursday, hospitalizations and deaths have remained far lower than at the peak of the pandemic in March 2020 or even during a winter surge a year ago.

Hochul’s remarks Friday, recapping steps she’s taken to curb the spread of COVID-19 while also keeping schools and businesses open, underscored a shift in public policy on keeping people safe as Omicron sweeps the state. Many people who are vaccinated and have gotten booster shots report relatively minor symptoms.

Some Republican officials have called Hochul’s recent mask mandate — a measure she said was meant to prevent shutdowns — an overreach and an unnecessary burden on businesses. More than a dozen counties have said they won’t enforce the mandate.