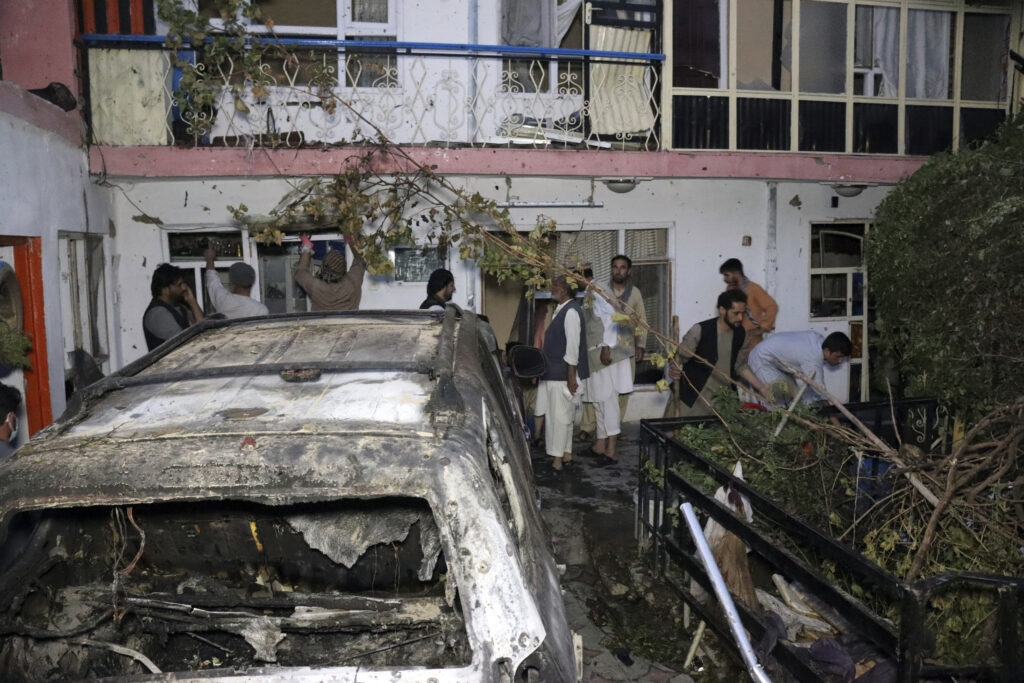 The Afghan survivors of an errant U.S. drone strike in August that killed 10 members of their family said Tuesday they are frustrated and saddened that U.S. troops involved in the strike will not face disciplinary action.

Sitting on a cement walkway just a few feet from where a U.S. hellfire missile slammed on Aug. 29 into a car belonging to their older brother, Zemerai Ahmadi, three surviving brothers spoke to The Associated Press of their loss. Seven children of the family were killed.

To this day, they have heard nothing from Washington about financial compensation or when they would be evacuated from Afghanistan.

Ahmadi, 37, was a longtime employee of an American humanitarian organization. The strike that killed him and nine others took place amid the chaotic last days of the U.S. troop withdrawal from Afghanistan following the Taliban takeover of the country in mid-August.

It also came just days after an Islamic State suicide bomber killed 13 U.S. troops and 169 Afghans at a Kabul airport gate. U.S. forces believed that the car they were following was an imminent threat and decided to strike.

Since the strike, the Ahmadis had demanded that those responsible be punished and that they be relocated to the United States or a third country deemed safe for them.

On Monday, the Pentagon said that Defense Secretary Lloyd Austin had approved recommendations for improvements in strike operations from the generals who lead U.S. Central Command and Special Operations Command, based on the findings of an independent Pentagon review released last month.

But there were no recommendations for discipline made by the generals, according to John Kirby, chief Pentagon spokesman.

For the Ahmadis, every day they remain in Kabul puts them at risk. Rumor on the street has it that the U.S. has already paid them and criminals are eager to get their hands on the money, said Emal Ahmadi. His 3-year-old daughter Malika was killed in the strike.

They are also getting phone threats, added Emal, the youngest of the brothers. The callers threaten to kill them if they don’t give them money.

“People are always asking us how much money we got,” Emal added. As for the U.S. promises to evacuate the family, “we are waiting. We have heard nothing. … The longer it takes, the more dangerous it is for us.”

For Romal Ahmadi, whose three children aged 2-7 years were killed in the strike, the days are a blur of depression and pain. “I feel only pain,” he said. He wants the U.S. troops behind the strike punished.

At the time of the strike, the U.S. was working to evacuate thousands of Americans, Afghans and other allies in the wake of the Afghan government’s collapse.

For weeks after and despite mounting evidence that the U.S. had wrongly killed the 10 Ahmadis, the Pentagon maintained it had taken out a potential Islamic State operative. It wasn’t until mid-September that U.S. Marine Gen. Frank McKenzie, head of U.S. Central Command, called the strike a “tragic mistake” and said that innocent civilians were indeed killed in the attack.

The Pentagon review subsequently found there were breakdowns in communication in the process of identifying and confirming the target of the bombing.

“My children are all gone. No one can bring them back,” Romal said.