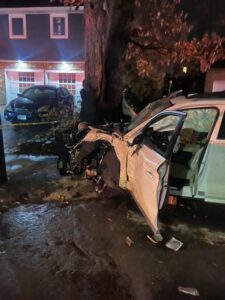 A drunk driver in Woodmere crashed into a car of girls returning from a Camp Anna Heller reunion on Motzoei Shabbos, killing one girl and injuring several others.

The nifteres has been identified as 15-year old Liel Namdar, a”h, a student at Torah Academy for Girls (TAG). Baruch dayan ha’emes.

A Dodge Ram pickup truck driven by an allegedly intoxicated driver crashed into an Audi Q5 SUV carrying the girls on Edward Avenue and Peninsula Boulevard just before 11 p.m.

Liel was killed, and the other four people in the Audi were hospitalized. Two were subsequently discharged, according to 5 Towns Central. Readers are asked to daven for the refuah sheleimah of Miriam bas Ina Pessya Yocheved (the driver, who is in critical condition), and Chana Eliana bas Naomi, besoch she’ar cholei Yisrael.

The driver of the Dodge, Arlin Javier Aguilera, 34, of West Hempstead, was arrested, after police alleged he appeared to have “glassy, blood shot eyes, [a] strong odor of alcohol beverage coming from his breath,” his own admission that he had been drinking, and a breathalyzer showed him with a blood-alcohol level of .12.  He and the one passenger in the car were hospitalized with minor injuries, Nassau County police said.

The levayah for Liel Dina Namdar, a”h, was held Sunday at JFK Airport. Kevurah was in Eretz Yisrael.

TAG and Camp Heller are making mental-health professionals available for the girls grieving the loss of their classmate and fellow camper.