“We’re doing everything in our power to protect our students and school staff, and a mandate for nonpublic school employees will help keep our school communities and youngest New Yorkers safe,” de Blasio said in a statement Thursday evening.

Private-school employees will have to provide proof of one vaccine shot by December 20. Public-school staff, along with other city employees, already have a vaccine mandate in place, though people can apply for religious or medical exemptions, provided they get weekly testing while their exemption application is considered.

The mandate will apply to approximately 56,000 employees at 938 schools across the city, and will kick in on the same day as another city mandate, on about 102,000 childcare employees, which was announced on Monday.

De Blasio and Chokshi held separate calls with Jewish and with Catholic school leaders this week, informing them of the impending mandate. People familiar with the calls, who spoke with Hamodia on condition of anonymity, said there was pushback from both Jewish and Catholic leaders.

One participant on a de Blasio call told Hamodia, “The mayor spoke about being concerned about Omicron. We understand that. But what was disappointing was there wasn’t really a dialogue about balancing the safety of our schools in a way that won’t create holes in our classrooms if teachers who refuse to get vaccinated are fired. A school that’s 95% vaccinated, is the marginal increase in health from having an unvaccinated teacher fired worth leaving more classrooms without teachers, when schools are already experiencing teacher shortages?”

When someone asked de Blasio to allow teachers to get weekly testing as an alternative to vaccination, the mayor refused, according to a participant who spoke with Hamodia. “The mayor essentially repeated about how we have to be careful about Omicron, and general scaremongering, but did not give any substantive response.”

One person on the call mentioned to the mayor that the city has rarely approved religious or medical exemptions, according to a participant who spoke with Hamodia. “When the person asked what good is an exemption that is not implemented, de Blasio essentially said that exemptions should not be given often.”

Rabbi Zwiebel, who is also executive vice president of Agudath Israel of America, wrote that the mandate could have a “devastating” effect on the schools.

Some yeshivos are currently in crisis due to a dearth  teachers. And member of the Committee told Hamodia that Catholic school officials said some of their schools are in danger of shutting down if this mandate takes effect.

“The health and safety of our children is paramount and we are extending our vaccine mandate to ensure all schools are protected from COVID-19,” Chokshi said in a statement Thursday. “All teachers and school staff should get vaccinated as soon as possible. The COVID-19 vaccines are safe, effective and save lives.”

A de Blasio administration spokesperson did not respond to Hamodia’s request for comment Thursday as to why schoolchildren are in need of protection by mandate. Officials have touted the safety of public schools since they re-opened in September 2o2o, long before the vaccine mandate on public-school employees took effect in October 2021. The current 7-day Covid positivity rate in public schools is 0.52 percent, and children have been at lowest risk of serious Covid outcomes throughout the pandemic.

Currently, 89 percent of New York City adults, and 96% of Education Department employees, have received at least one vaccine dose.

The mandate was announced shortly before Gov. Kathy Hochul, in a joint press conference with de Blasio Thursday night, said that five Omicron cases have been confirmed in New York state — one in Suffolk County and four in New York City.

The Omicron variant, first discovered in southern Africa, is, at this early stage, believed to be more contagious than the original Covid, but not necessarily more dangerous.

“The early cases … seem to be minor cases,” Hochul said, adding that officials knew it was only a matter of time before Omicron cases were discovered in New York, and that there is “no cause for alarm.”

Councilman Stephen Levin (Brooklyn Heights, Williamsburg, Bedford–Stuyvesant) tweeted his approval of the new mandate. “While we are still learning about Omicron, we know that vaxx is effective against the other variants incl Delta,” Levin wrote. “We know that widespread vaxx is how we end the pandemic.”

Councilwoman Inna Vernikov (Midwood, Sheepshead Bay, Manhattan Beach) tweeted opposition, writing, “Bill de Blasio needs to keep his hands off of our private schools. This mandate is just another way for government officials to sink their teeth into our private schools and attempt to exert control. If we let this slide, we are setting a dangerous precedent.”

“What a lovely parting gift from City Hall,” tweeted Councilman Kalman Yeger (Boro Park, Bensonhurst, Midwood), of the mandate that will take effect just days before the term-limited de Blasio leaves office, and is expected to turns his sights to a gubernatorial run. “The city has no legal authority to bark these mandates at private employers and religious institutions. This will just lead to another court battle on religious freedom which New York will — once again — lose.” 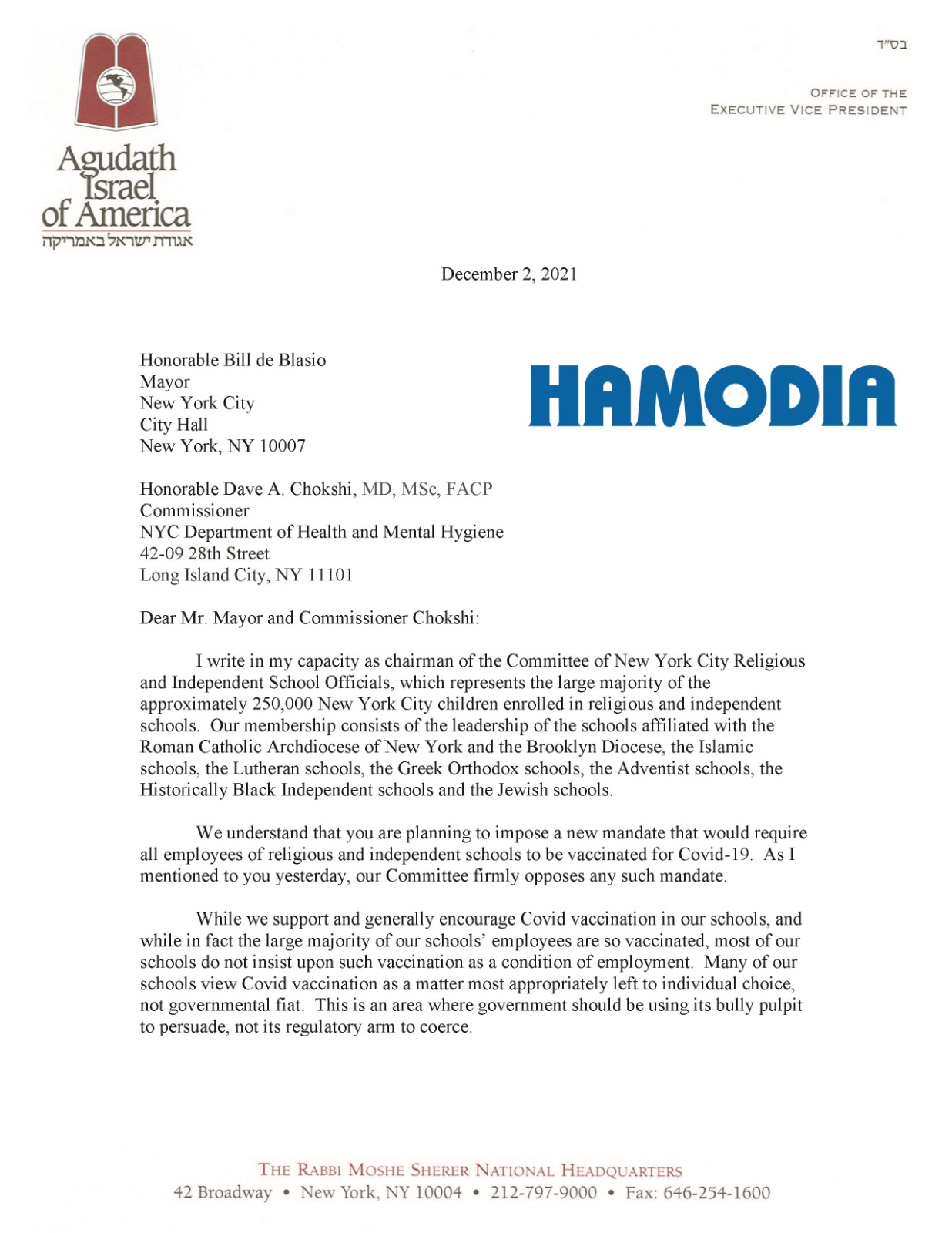 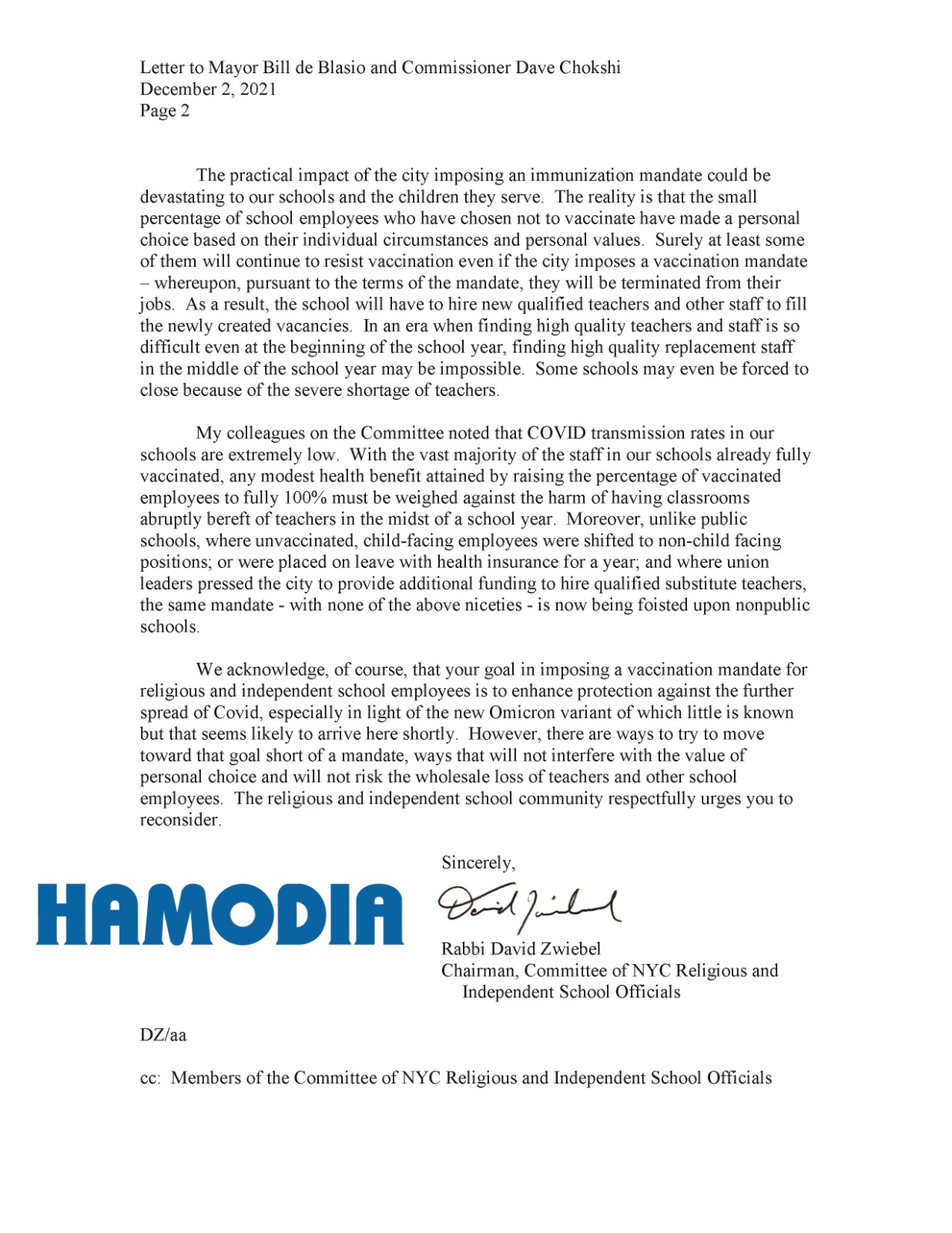