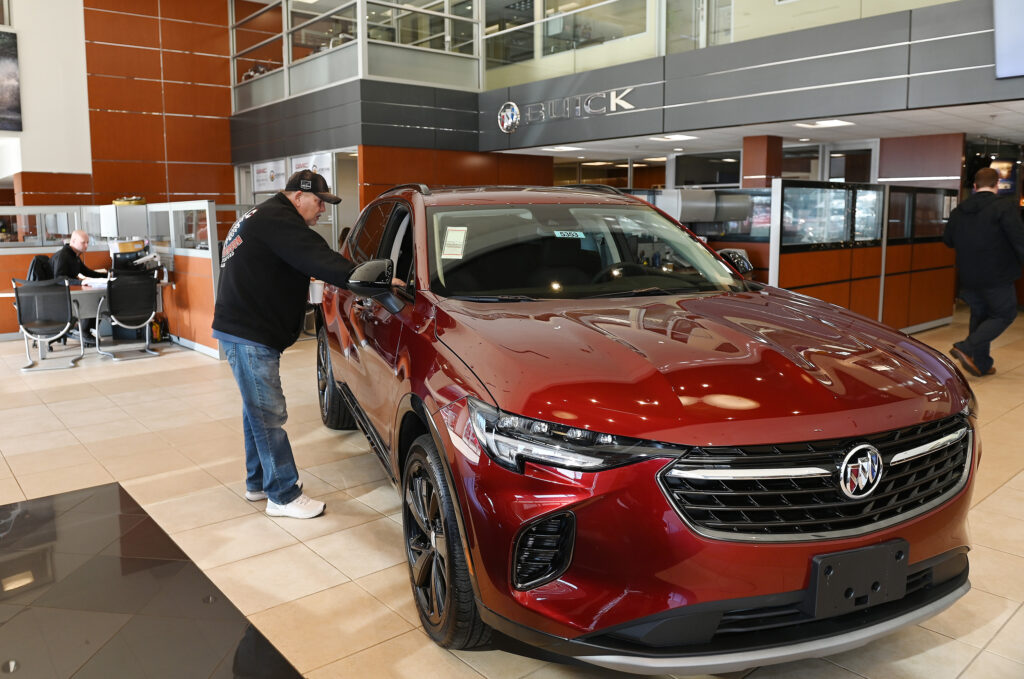 Car shoppers shouldn’t expect to see the same lot-clearing discounts they normally would during the year-end shopping season.

A global microchip shortage has left dealerships bare, forcing some buyers to wait weeks or months for an order that might not make it before the end of the year. Although automakers will run some familiar campaigns for the rest of 2021, incentives if available at all will apply to fewer vehicles and may still have customers paying more than suggested retail prices.

Carl Black, 67, of Pontiac, Michigan, is glad he still has another year left on his Cadillac XT5 lease after looking at new models this week while his vehicle was being serviced at a dealer: “I wouldn’t want to pay the price now. I got mine at a pretty decent price, so I’d be paying probably $100 to $150 more per month.”

Many vehicles are sold before they hit the dealership, said Warren Browne, an auto supplier consultant and former General Motors Co. executive who worked at the automaker for 40 years.

“Manufacturers are taking the profit,” he said. “The idea that there would be a car clearance carnival in December — that probably is minimal.”

Demand, however, hasn’t sunk. Some dealers say it’s the best business they’ve ever seen. The COVID-19 pandemic has helped Americans accumulate $2.3 trillion more in savings in the last 19 months than they normally would have, and the median household’s checking account balance was 50% higher in July than in 2019, according to the JPMorgan Chase Institute.

Deals depend on manufacturers, but employee discounts help protect customer pricing, said Carlito Mojica Jr., retail development senior manager of LaFontaine Automotive Group, which has 29 dealerships in Michigan. If a desirable vehicle isn’t available, there’s flexibility on extending leases, and customers whose vehicles don’t expire for another six months should starting thinking about ordering now as wait times can be four to 12 weeks. LaFontaine’s advertising also has emphasized preventative servicing amid parts shortages.

“Most of our customers have opted to the preowned channel: late-model, low-mileage vehicles that fit their needs,” Mojica said. “We encourage people to do their research. There might be a model we have [in] inventory that they might not have considered. Some people love trucks and want trucks, and they are realizing they don’t need the truck because they’re not hauling. A compact sport utility or sport utility in general is still fulfilling their needs.”

Average transaction prices for new vehicles rose to $45,598 and to $28,607 for used vehicles in October, a 14.3% and 27.4% increase year over year, respectively, according to auto information website Edmunds.com Inc. Automakers are loading up vehicles with $5,000 in options on most new offerings on lots.

“There might be some low-interest financing, some of those programs available,” said Jessica Caldwell, executive director of insights at Edmunds. “There won’t be much wiggle room on the price of the car.”

That’s because vehicle inventory is down by 77% compared to November 2019, a more normal year. That actually represents a plateau as supply has continuously fallen through the year, an indication the parts shortage may be slightly improving, Caldwell said. But inventory remains historically low.

A rollover crash after someone else lost control earlier this month totaled Brian Browne’s vehicle. The 65-year-old from Northville, Michigan, went to a dealership to look at a new Chevrolet Trailblazer SUV. After taking a seat and getting a feel that it was larger than his Equinox, he asked to take it for a test-drive.

“The salesperson said, ‘It’s already been sold,'” Browne said. “Someone had gotten there 10 minutes before me and bought the car.”

Ordering a new Trailblazer could take months, but Michael Bates Chevrolet Inc. in Woodhaven, Michigan, was able to put him in a new Trailblazer last week. It had a number of add-ons for wheel locks, paint protection and heavy-duty floor mats, but leasing cut Browne’s monthly payment almost in half compared to buying the vehicle.

“I’m being told there’s vehicles on freighters in the Pacific Ocean, but no one to unload them,” he said. “There’s used cars on the lot. They don’t have a lot of new cars.”

Peter Ngo, dealer principal of Tustin Cadillac in Tustin, California, had no new vehicles on his lot earlier this week with trucks delivering vehicles every week-and-a-half to two weeks. Cadillac is running its Season’s Best campaign, but it doesn’t come with any new deals. Still, Ngo is selling two to three weeks into the pipeline.

“Demand is at an all-time high,” he said. “Profitability is really good. Inventory continues to be a challenge, but we can see it and feel it that it is getting better than the last three to four months.”

Chevrolet also is running its “Cyber Cash” campaign with $500 on top of other offers, while Buick and GMC have competitive offers in the market all month long, GM spokesman Sabin Blake said in an email.

Volkswagen AG is holding its annual “Sign Then Drive” event. It offers $0 down payment, $0 first month’s lease payment, $0 security deposit or $0 due at signing on Atlas, Atlas cross Sport, Jetta, Taos and Tiguan models — unlike most models in the past, a result of the chip shortage, spokesman Mark Gillies said in an email.

Tom McMenamin, VW’s national dealer council chairman and owner of Toms River Volkswagen in New Jersey, says he has about 30% of his usual stock with deliveries coming every week. Waiting on a new vehicle might take 75 days, but he’s gotten creative in getting customers into a new vehicle sooner.

“If someone needs transportation right now, they still can get a vehicle, but it may not be the color they want,” he said. “If they order a blue Jetta, it’s going to take three months. I’ll sell them a new red Jetta I have, and they can drive that new car, and I’ll offer 100% reimbursement minus any damage to the car and any mileage when the blue one comes in.”

Some automakers are pushing orders. As a part of its strategy to increase its retail order bank, Ford Motor Co. is offering $1,000 on orders for much of its lineup. Its “Get Holiday Ready” sales event offers 0% financing for 60 months, though it may vary by region to stay competitive based on inventory, spokesman Said Deep said.

Customers on average are paying 11.4% over the manufacturer’s suggested retail price for a new vehicle, according to auto information site iSeeCars.com. Crossovers like the Jeep Renegade, Acura MDX and Hyundai Kona EV might hurt the least with buyers paying less than 3% over MSRP on average.

“These are the least bad deals,” said Karl Brauer, executive analyst at iSeeCars.com. “That is the world we are living in. You’re not going to get a good deal right now.”

Low inventory has made competition among available vehicles fierce. One in 20 new vehicles sold the same day they hit the dealership lot in the first half of November, according to Edmunds. Nearly a third sold within the first week, which jumps to half after two weeks.

“People are starting to get back to their lives, back to school or a university, back to the office more,” Caldwell said. “That inherent need for a car to serve as that mode of transportation has definitely increased.”

If customers need a vehicle now, they might have to compromise on color, features and even type of vehicle such as a sedan over a popular SUV or think about driving farther to pick one up. Buyers might have to put down a couple hundred dollars for a deposit on orders, and experts at Edmunds recommend getting any agreements on pricing in writing.

Hyundai Motor Co. is holding its Winter Sales event, offering 0% APR for 48 months on ’22 vehicles except for the Palisade and Ioniq 5 through Jan. 3. Honda Motor Co. Ltd. is running ads for Acura and Honda, but dealers will determine what, if any, offers are included this shopping season.

Alfa Romeo will run its “Season of Speed” end-of-year sales event in December. The messaging will direct customers to the online E-Shop portal for the first time.

Customers appear more willing to order a vehicle than in the past, a process that typically takes six to eight weeks, said Jim Schebil, owner/president of Fox Hills Chrysler Jeep in Plymouth, Michigan. He had 17 vehicles, mostly Jeep Grand Cherokee L SUVs, on his lot earlier this week and was eager to get some of the smaller Jeep Compass crossovers in stock in December.

“We are going to have smaller, more price-sensitive cars,” he said. “It means having a full spectrum of cars to sell soon.”