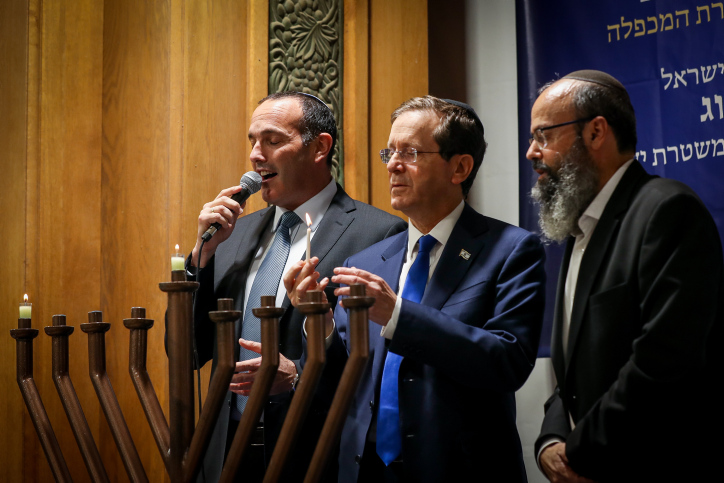 Speaking at Maaras Hamachpeleh, Herzog declared that “the historic connection of Jews to Chevron, to the Tomb of the Patriarchs, to the heritage of the patriarchs and matriarchs is unquestionable. Recognition of this connection must be beyond all controversy.”

Controversy, of a kind, ensued after the candle lighting, however.

Clashes erupted between Palestinians and IDF forces near a checkpoint between the Palestinian and Israeli sections of the city, Palestinian media reported on Sunday evening. The checkpoint is known to Israelis as Machsom Hashoter (the policeman’s checkpoint) and by Palestinians as Bab al-Zawiya.

Tensions were reportedly high ahead of Herzog’s appearance. There was a heavy deployment of security forces in the city, and roads were closed near the holy site, according to reports.

One video on social media shows Border Police officers scuffling with a number of men linking arms and chanting against the visit outside the compound. In the video, police approach the men and tug away a Palestinian flag they are holding.

In addition, dozens of Israeli left-wing activists protested Herzog’s visit, with signs in Hebrew and English accusing Israel of apartheid and calling to “banish the darkness.”

The protest was held at the entrance to the adjacent community of Kiryat Arba after the military imposed an order banning left-wing activists from Chevron itself to prevent “disturbances,” Haaretz reports, citing organizers.

In an appeal for peace, Herzog remarked: “You won’t agree about everything, but we need to remember that ‘we are all one man’s sons,’” he says according to a statement from his office, quoting from the Talmud.

“We all have shared roots from this cave. Alongside that we have to remember that our roots are not the only ones that go back to this cave. Especially today, and especially here, in this holy space dedicated to all sons of Avraham, we have to continue dreaming of peace, between all faiths and creeds in this land, and to condemn any type of hatred or violence.”