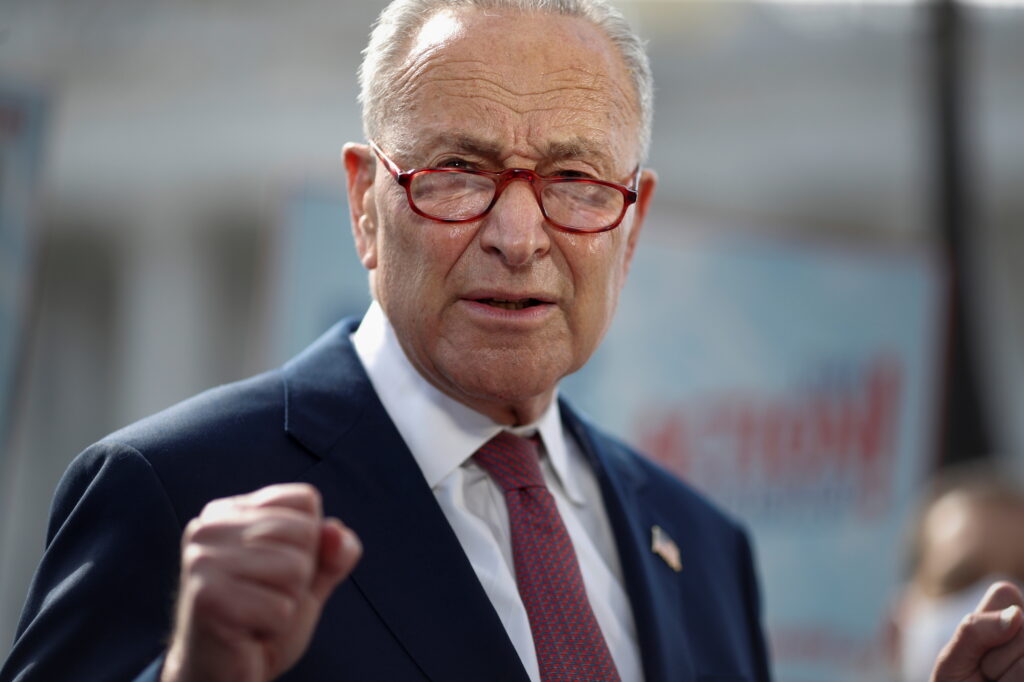 Democrats on Tuesday said they had clinched a deal on a plan that aims to lower prescription drug prices for millions of American seniors, part of an eleventh-hour blitz to fine-tune their $1.75 trillion tax-and-spending plan in the hopes of bringing it to a vote as soon as this week.

Senate Majority Leader Chuck Schumer, D-N.Y., announced the agreement after a private meeting of party lawmakers, marking a potential end to a battle between some liberals and moderates over a policy priority that many Democrats had pitched over the course of the 2020 presidential election.

“Fixing prescription drug prices consistently has been a top issue for Americans year after year,” Schumer said at a news conference. “We’ve heard this from people across the country . . . Today we’ve taken a massive step forward in helping alleviate that problem.”

Under the deal, the U.S. government would gain the ability to negotiate some drug prices on behalf of seniors who participate in Medicare. Such a power for the first time would give the benefit program leverage to drive down the price of medicine, allowing the federal government along with millions of families to save money.

At first, the Medicare negotiation powers would only cover a limited class of the 10 most expensive drugs, including medicines that help care for cancer patients, starting in 2023, according to lawmakers including Sen. Ron Wyden, D-Ore., who helped negotiate the deal. Eventually, though, Medicare could negotiate on other drugs after they are no longer covered by certain government restrictions, which protects drugmakers from generic competition.

Democrats also plan to impose special, new caps on how much seniors would have to pay for insulin, which would be set at $35, seeking to help diabetes patients beset by sky-high price increases in recent years. Additionally, seniors who participate in the Medicare drug benefits plan known as Part D would see their yearly, out-of-pocket drug spending capped at $2,000, according to Wyden and other Democrats.

And their deal further includes “anti-price gouging penalties,” which Wyden explained as money paid back to the U.S. government when drug companies raise prices more than inflation. The penalties also apply to commercial health insurance plans, though the details are unclear.

“The prohibition on negotiation has almost been like a curse,” Wyden said. “There was a sense the government had its hands tied behind its back. And now a precedent is being set that starting right out of the gate there’s going to be negotiation on the most expensive drugs – cancer drugs, arthritis drugs, anticoagulants.”

“Once you set a precedent . . . you are really turning an important corner,” he said.

Much is still unknown about the plan, which had not been released in full by late Tuesday afternoon. Even as Democrats championed it as an early policy win, it still marked a significant departure from the more aggressive drug-pricing reforms that the party’s House lawmakers had put forward in recent years.

Still, it presented a potential resolution to one of the thorniest fights still remaining around Democrats’ still-forming $1.75 trillion package, which broadly aims to overhaul the country’s health care, education, climate and tax laws. Sen. Kyrsten Sinema, D-Ariz., who had opposed an earlier version of Democrats’ drug pricing plans, joined other moderates in offering her support for the deal.

The agreement came on a busy day for Democrats, shortly after House Speaker Nancy Pelosi, D-Calif., told her caucus that negotiators were nearing resolution on a slew of outstanding items, including prescription drugs, plans to combat climate change, and changes to the immigration system.

The developments could open the door for the House to vote as soon as this week on the $1.75 trillion tax-and-spending measure as well as a separate, second package to improve the nation’s roads, bridges, pipes, ports and Internet connections. Behind the scenes, Pelosi has pushed Democrats to wrap up work on writing the bill as soon as possible, setting in motion a plan by which the chamber could vote perhaps on Thursday.

But Pelosi also did not lay down a specific timeline in her latest public comments or private talks with lawmakers, a reflection of the uncertainty that has plagued the party for days. Repeatedly, Democratic leaders have said they are close to delivering President Joe Biden his signature spending initiatives – only to be stymied by their own internal disputes.