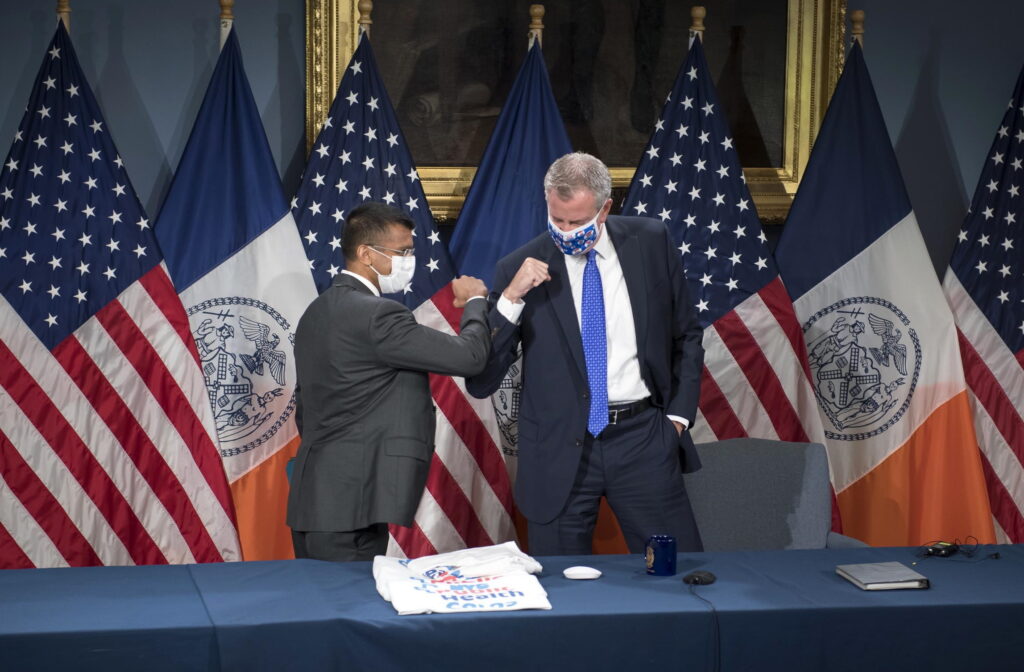 “New York City is one of the most transparent jurisdictions in the entire world with respect to the public health data that we’re sharing.” — New York City Health Commissioner Dr. Dave Chokshi, at a press conference on October 5.

“Dr. Chokshi, I think he’s been incredibly transparent throughout this crisis.” — Mayor Bill de Blasio, at the same press conference.

Despite these pronouncements of transparency in releasing data during the COVID-19 pandemic, New York City has in fact been refusing to release comprehensive data comparing the immunity obtained from prior infection with that obtained from vaccines.

What city officials do deserve credit for is their ability to seemingly give real answers while artfully dodging the actual questions.

As far back as at least March, reporters from Hamodia and other outlets have continually asked the city to disclose data comparing the rate of reinfection (those who have gotten COVID after having previously had it) with the rate of breakthrough cases (those who have gotten COVID after being vaccinated). But the city has continually refused these requests, saying that this data is unimportant because people who have antibodies from prior infection obtain additional immunity from the vaccine, and therefore should get vaccinated anyway.

For example, on July 14, asked about this issue by a Hamodia reporter at a press conference, Chokshi said, “Vaccination strengthens [natural] immunity and may extend the duration of it as well. This is why we’re recommending that even people who may have been infected with COVID-19 in the past, once they have recovered, it is important for you to get vaccinated as well.”

But in fact, these are not recommendations. These are mandates. None of New York’s vaccine mandates — required for school staff and people wishing to eat inside restaurants, for example — offer an alternative of showing prior immunity. In a democracy, “recommending” is fine; mandating is not, at least absent the disclosure of full data.

But, in fact, a straight comparison of natural immunity with vaccine-induced immunity is very helpful. And the health commissioner is smart enough to know that.

Some people who have been previously infected feel that getting the vaccine is unnecessary, and therefore don’t want to put themselves at risk of potential side effects from the vaccine. While we reject the general anti-vaxxer movement, even the most ardent pro-vaxxer knows that nearly all medications will generate some adverse side effects for at least a small number of people. And particularly in the case of the COVID-19 vaccines, which don’t have the years of research and data behind them that other medications do, people understandably feel that there is no reason to subject themselves to this risk, however small it may be, if they already have immunity from prior infection. Wise people generally don’t take medications they don’t need.

Moreover, vaccines are mandated in order to participate in a host of activities, from attending indoor concerts to eating inside restaurants and teaching in schools. If natural immunity is as good or better than vaccine-induced immunity, all the rights accorded vaccinated individuals should be given to those with prior immunity. Even if the vaccines provide additional immunity to those previously infected, if the vaccine alone is sufficient to work as a schoolteacher, eat inside a restaurant or attend a concert, natural immunity should be sufficient as well.

So why is the city not disclosing this data?

Chokshi finally conceded the truth last month on a media conference call. Pressed once again on the issue by a Hamodia reporter, the commissioner replied that the city releases data only if it is “connected to a public-health purpose, which is why we are ensuring that the key message is around the fact that if you have had prior infection” you should still get vaccinated.

Voilà! After months of stonewalling reporters seeking the data, Chokshi admitted that the Health Department won’t release the information because it doesn’t advance the department’s agenda. Presumably, the department does have data showing that natural immunity is equivalent or even superior to vaccine-induced immunity; if the data showed otherwise, the department would have already released it.

A study released by Israeli medical professionals in August concluded that prior COVID infection provided far greater immunity in that country against the delta variant than did the Pfizer vaccine alone. And a study released last week by the U.K. Office of National Statistics showed that during the delta-dominant period, natural immunity “provided a similar level of protection” to the vaccines from Pfizer or AstraZeneca. Certainly, no one study is the final word on the matter. But if the New York City Health Department has numbers showing otherwise, the data should be disclosed.

New York City officials certainly aren’t the only ones who have avoided mention of natural immunity. Health officials generally speak only of immunity from vaccines, ignoring the immunity obtained from prior infection.

What are the officials afraid of? Are they scared to release data showing the superiority of natural immunity because doing so would force them to accept natural immunity in lieu of a vaccine, which may result in anti-vaxxers purposely infecting themselves rather than getting vaccinated? Asked by Hamodia whether this was a reason for his refusal to release the data, Chokshi replied in the negative, saying that “is not something that has been a part of our thinking.”

We’re skeptical as to whether Chokshi is being transparent here. And if he isn’t, that begs the question further: Why does he continue to deny requests to release the data and recognize natural immunity?

Chokshi’s refusal to recognize natural immunity or release data supporting his position is giving ammunition to hardcore anti-vaxxers and their theories of conspiracies between health officials and drug companies to just push vaccines. This is on top of the unjustifiable policy of essentially forcing some subset of people to take injections they may not need.

Commissioner Chokshi: If and when you decide to follow your own pronouncement of transparency, here are some simple questions to answer:

If you have not compiled this data, why not?

If you have compiled it, why not disclose it?

Why should New Yorkers be forced to follow your “recommendations,” aka mandates, without being given the data underlying them?

If natural immunity is superior to vaccine-induced immunity, why shouldn’t those with the former enjoy all the rights of the latter?

How is it justifiable to release only data sets that fit your particular view of a “public-health purpose”?

We respectfully request answers to these questions, Commissioner. Then, and only then, can you boast of transparency.