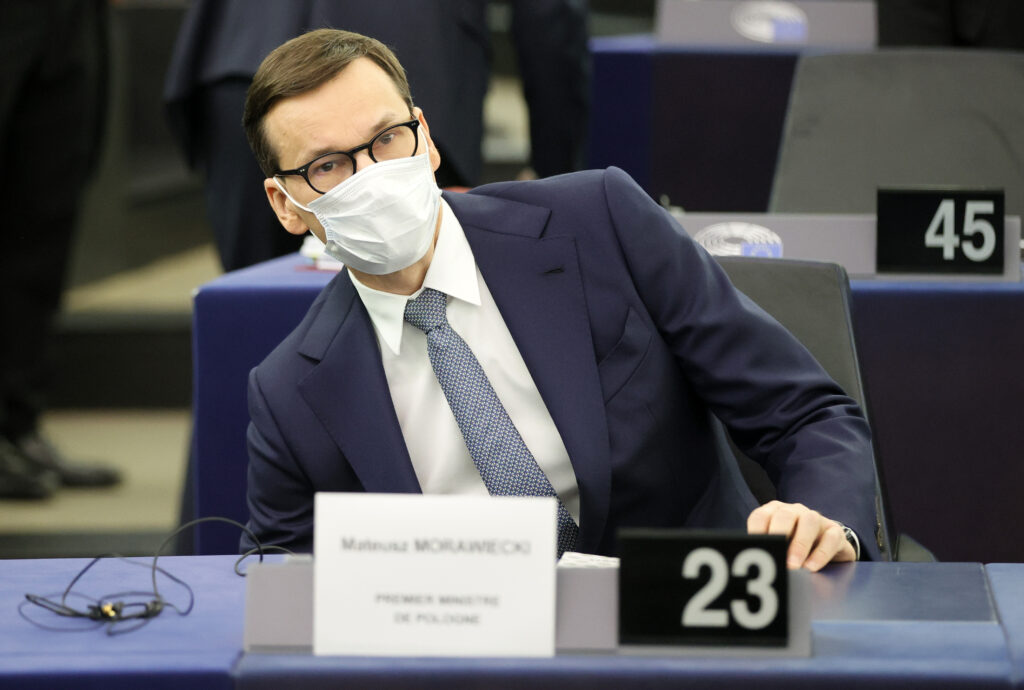 The European Union’s top official locked horns Tuesday with Poland’s prime minister, arguing that a recent ruling from the country’s constitutional court challenging the supremacy of EU laws is a threat to the bloc’s foundations and won’t be left unanswered.

Addressing EU lawmakers in Strasbourg, European Commission president Ursula von der Leyen said she is deeply concerned by the ruling, which she said is “a direct challenge to the unity of the European legal order” and undermines the protection of judicial independence.

“The rule of law is the glue that binds our union together,” von der Leyen said.

Relations between Poland and the EU reached a new low earlier this month after the tribunal ruled that Polish laws take precedence over those of the 27-nation bloc — which Poland joined in 2004 — escalating lingering tensions over democratic standards between the country’s right-wing nationalist government and Brussels institutions.

The split came to a head at Tuesday’s plenary of the European Parliament, where Polish Prime Minister Mateusz Morawiecki defended his country’s stance that the highest law of Poland is the country’s constitution and that stands above any other law.

But Morawiecki insisted that Poland abides by EU treaties and brushed off comment from opponents of Poland’s nationalist government who fear that the court’s ruling has put the country on a path to a possible “Polexit,” or an exit from the 27-nation EU.

“We should not be spreading further lies about Poland leaving the EU,” he said.

At the heart of the dispute is the question who should have the most power within the 27-nation bloc — each individual nation over their citizens or the EU institutions over the member nations. It was the prime mover behind the exit of Britain from the EU, and it has stirred passions in several eastern and central European nations like Poland and Hungary.

The whole idea behind the EU is that a united front will make the 27 nations a formidable power in the world, while they would be bystanders as individual countries. And even if member states are happy to see that power used in international relations, some abhor it when it affects them.

In his speech, Morawiecki described Poland as a nation that is being intimidated and attacked by an EU whose top court issues rulings that aim to take more and more power away from its member states.

He insisted that the EU must remain a union of sovereign states until the time that all its members agree by treaty to give up more of their own national powers.

“We are now seeing a creeping revolution taking place by way of verdicts of the European Court of Justice,” he said.

He also said he sees double standards in the EU rulings on Poland’s changes to its judiciary, noting that each country has its own judicial system, with politicians electing judges in some cases.

The European Commission has several options to try to make Warsaw comply with EU law, notably by continuing to hold up the country’s access to billions of euros in European money to help revive its economy in the wake of the coronavirus pandemic.

“We cannot and we will not allow our common values to be put at risk. The Commission will act,” von der Leyen said.

The commission can also start infringement procedures, or decide to activate a mechanism allowing the suspension of payments of EU money to a member country breaching the principles of the rule of law in a way that affects the bloc’s budget or financial interests.

Von der Leyen, however, said she is open to compromise.

“I have always been a proponent of dialogue and I will always be,” she said. “This is a situation that can and must be resolved. And we want a strong Poland in a united Europe.”

The Polish tribunal majority ruling — in response to a case brought by Morawiecki — said Poland’s EU membership did not give the European Court of Justice supreme legal authority and did not mean that Poland had shifted its legal sovereignty to the EU.

Poland’s prime minister asked for the review after the European Court of Justice ruled in March that Poland’s new regulations for appointing judges to the Supreme Court could violate EU law. The ruling obliged Poland’s government to discontinue the rules that gave politicians influence over judicial appointments. To date, Poland has not complied.

Last month, the European Commission asked the European Court of Justice to impose daily fines on Poland until it improves the functioning of the Polish Supreme Court and suspends the laws that were deemed to undermine judicial independence.