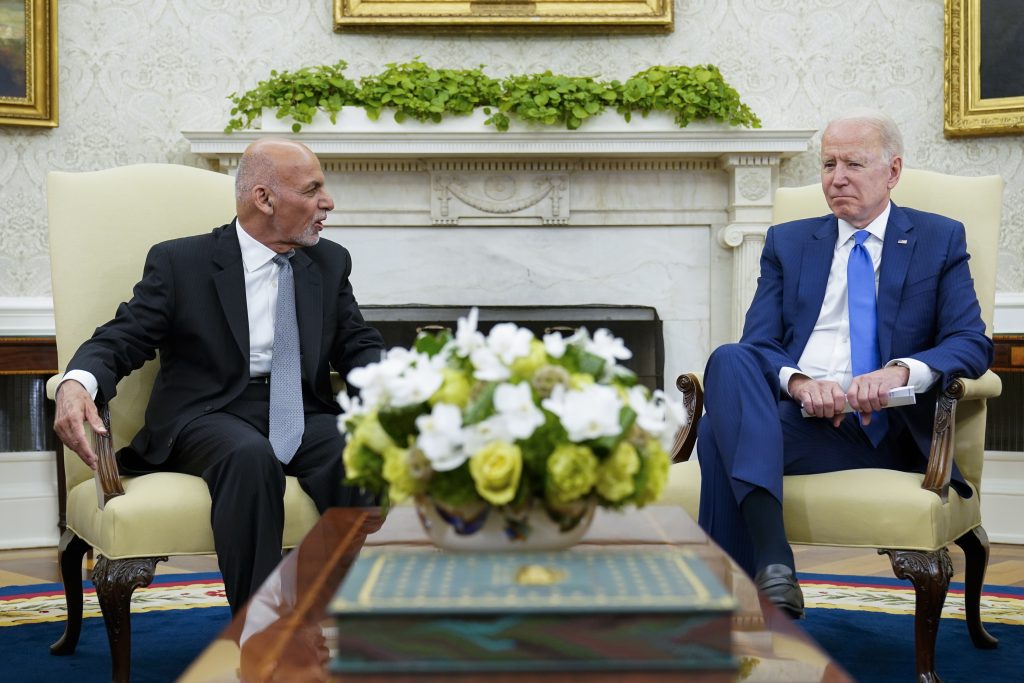 In the last call between U.S. President Joe Biden and his Afghanistan counterpart before the Taliban seized control of the country, the leaders discussed military aid, political strategy and messaging tactics, but neither Biden nor Ashraf Ghani appeared aware of or prepared for the immediate danger of the entire country falling to insurgents, a transcript reviewed by Reuters shows.

The men spoke for roughly 14 minutes on July 23. On August 15, Ghani fled the presidential palace, and the Taliban entered Kabul. Since then, tens of thousands of desperate Afghans have fled and 13 U.S. troops and scores of Afghan civilians were killed in a suicide bombing at the Kabul airport during the frenetic U.S. military evacuation.

Reuters reviewed a transcript of the presidential phone call and has listened to the audio to authenticate the conversation. The materials were provided on condition of anonymity by a source who was not authorized to distribute it.

In the call, Biden offered aid if Ghani could publicly project he had a plan to control the spiraling situation in Afghanistan. “We will continue to provide close air support, if we know what the plan is,” Biden said. Days before the call, the U.S. carried out air strikes to support Afghan security forces, a move the Taliban said was in violation of the Doha peace agreement.

The U.S. president also advised Ghani to get buy-in from powerful Afghans for a military strategy going forward, and then to put a “warrior” in charge of the effort, a reference to Defense Minister General Bismillah Khan Mohammadi.

Biden lauded the Afghan armed forces, which were trained and funded by the U.S. government. “You clearly have the best military,” he told Ghani. “You have 300,000 well-armed forces versus 70-80,000 and they’re clearly capable of fighting well.” Days later, the Afghan military started folding across provincial capitals in the country with little fight against the Taliban.

In much of the call, Biden focused on what he called the Afghan government’s “perception” problem. “I need not tell you the perception around the world and in parts of Afghanistan, I believe, is that things are not going well in terms of the fight against the Taliban,” Biden said. “And there is a need, whether it is true or not, there is a need to project a different picture.”

Biden told Ghani that if Afghanistan’s prominent political figures were to give a press conference together, backing a new military strategy, “that will change perception, and that will change an awful lot I think.”

The American leader’s words indicated he didn’t anticipate the massive insurrection and collapse to come 23 days later. “We are going to continue to fight hard, diplomatically, politically, economically, to make sure your government not only survives, but is sustained and grows,” said Biden.

The White House Tuesday declined to comment on the call.

After the call, the White House released a statement that focused on Biden’s commitment to supporting Afghan security forces and the administration seeking funds for Afghanistan from Congress.

Ghani told Biden he believed there could be peace if he could “rebalance the military solution.” But he added, “We need to move with speed.”

“We are facing a full-scale invasion, composed of Taliban, full Pakistani planning and logistical support, and at least 10-15,000 international terrorists, predominantly Pakistanis thrown into this,” Ghani said. Afghan government officials, and U.S. experts, have consistently pointed to Pakistani support for the Taliban as key to the group’s resurgence.

The Pakistani Embassy in Washington denies those allegations. “Clearly the myth of Taliban fighters crossing from Pakistan is unfortunately an excuse and an afterthought peddled by Mr. Ashraf Ghani to justify his failure to lead and govern,” an embassy spokesman told Reuters.

Reuters tried to reach Ghani’s staff for this story, in calls and texts, with no success. The last public statement from Ghani, who is believed to be in the United Arab Emirates, came on August 18. He said he fled Afghanistan to prevent bloodshed.

By the time of the call, the United States was well into its planned withdrawal from Afghanistan, which Biden had postponed from the May date set by his predecessor, Donald Trump. The U.S. military had closed its main Afghanistan air base, at Bagram, in early July.

As the two presidents spoke, Taliban insurgents controlled about half of Afghanistan’s district centers, indicating a rapidly deteriorating security situation.

Afghanistan was promising a shift in its military strategy, to start focusing on protecting “population centers” – major cities – rather than fighting to protect rural territories. Biden referred approvingly of that strategy. He said that doing so would help not just on the ground but in the “perception” internationally that was required to shore up world support for the Afghan government.

Ghani, for his part, assured Biden that “your assurance of support goes a very long way to enable us, to really mobilize us in earnest.”

In a little over two weeks after Biden’s call with Ghani, the Taliban captured several provincial Afghan capitals and the United States said it was up to the Afghan security forces to defend the country. “These are their military forces, these are their provincial capitals, their people to defend,” Pentagon spokesman John Kirby said on August 9.

On August 11, U.S. intelligence reports indicated Taliban fighters could isolate Afghanistan’s capital in 30 days and possibly take it over within 90. Instead, the fall happened in less than a week.

When Biden asked him to include former Afghan President Hamid Karzai in a press conference, Ghani pushed back. “Karzai would not be helpful,” he said. “He is contrary, and time is of the essence, we cannot bring every single individual … We have tried for months with President Karzai. Last time we met for 110 minutes; he was cursing me and he was accusing me of being a U.S. lackey.”

Biden paused before responding: “I’m going to reserve judgment on that.”

Karzai could not be reached for comment, despite calls and texts to one of his aides.

In a follow-up call later that day that did not include the U.S. president, Biden’s National Security Advisor Jake Sullivan, General Mark Milley and U.S. Central Command commander General Frank McKenzie spoke to Ghani. Reuters also obtained a transcript of that call.

“I do not believe time is our friend here. We need to move quickly,” McKenzie added.

A spokesperson for McKenzie declined to comment. A spokesman for Milley did not respond by publication time.