Yeshivah Bachur Shot, Killed, Outside Denver Yeshivah in One of Three Shootings

A yeshivah bachur was tragically shot and killed in front of the Denver Yeshivah late Tuesday night.

The bachur was transported to a local hospital where he succumbed to his injuries.

Misaskim told Hamodia the family has been informed. The bachur has been identified as Shmuel Silverberg z”l, 19, from Cleveland. The levaya and kevura will be held in Lakewood.

Police added that no arrests have been made yet. The investigation into the horrific murder is ongoing, after a deadly crime spree was seen Tuesday night.

The crime spree started near Colfax Ave. and Grape St. at 10:50 p.m. with a carjacking. No injuries were reported.

Next, a shooting and carjacking took place in the 1500 block of Lafayette St around 11 p.m. One person was critically injured.

Then, the bachur was shot and killed in front of Yeshivha Toras Chaim.

Misaskim told Hamodia that the police do not believe the shooting was a targeted hate crime. 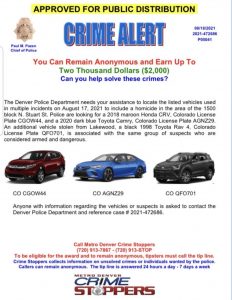 Police are looking for three vehicles connected to the crime spree: