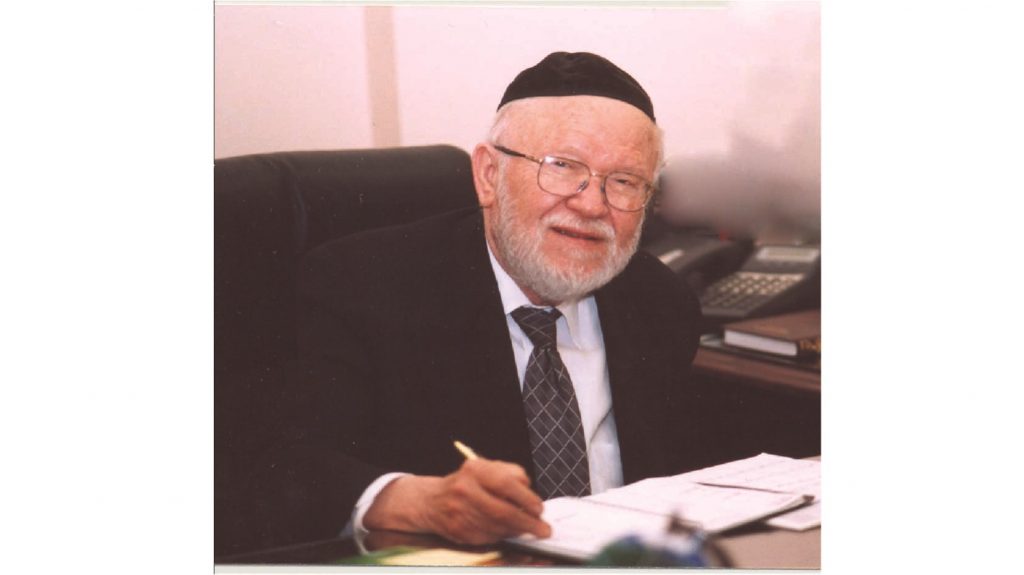 Recently a mother came to Bais Yaakov of Boro Park to register her young daughter for the upcoming school year. “Why did you choose our school?” Rabbi Menachem Frank, the current Menahel, asked.

“Well, I went to Bais Yaakov of Boro Park, as did my mother and grandmother,” she answered.

Four generations of this family were educated by this Bais Yaakov with Rabbi Ehrenreich at the helm, guiding each dor through the changes and challenges as it produced another link in the mesorah.

Hundreds of men and women, fathers and mothers and talmidos gathered Wednesday morning, 26 Av/August 4 to give kavod acharon to the Menahel’s Menahel, the person who other principals turned to when they sought guidance or chizuk.

After Reb Yitzy Ehrenreich led the tzibbur reciting Tehillim, Reb Yossel Ehrenreich spoke of how by some people, their work is a job, and by others it is a profession. “By my father, his job was more than a job or a profession, it was his calling, it shaped his entire life. His job ceased to be work as it became a joy and his passion. He became Bais Yaakov, and Bais Yaakov became him. When he was honored at a Bais Yaakov dinner, he once said, ‘Sleep, I sleep at 848 Lennox Road, but I live at Bais Yaakov of Boro Park.’ That encapsulated his connection with Bais Yaakov of Boro Park.”

Reb Yossie spoke about how his father stressed that the key middah of hodaah, giving thanks, is the sentiment expressed by Leah Imeinu, who upon the birth of Yehudah said natalti yoser meichelki — I took more than my portion. “My father felt he was the luckiest person in the world. If you would have offered him all the gold and silver trinkets we chase after, he would have turned them down, since he felt his was rich by having gotten yoser meichelki.

“My father worked lishmah. I do not mean he said ‘lesheim mitzvas chinuch’ each morning as he got into the car. Everything he did was lesheim the students, the teachers and the community. He had no other agenda. My father left a mark in the world, and you can do the calculation of 4 classes a year for 65 years, and there are perhaps 10 thousand alumnae, and many have children and grandchildren of their own. It is not an exaggeration to say he had a cheilek in thousands of beautiful Yiddishe homes.”

As a son, he often met people who upon hearing he was a son of Rabbi Ehrenreich of Bais Yaakov, they would gush forth with praise. “If you can be in public life for 65 years and people have nice things to say about you, it shows a tremendous siyata diShmaya which he was zoche to his kesser sheim tov. He attributed his success to his ability to listen to others, and he had a gift that he was able to empathize with others.

Harav Yaakov Horowitz, shlita, Rosh Yeshiva of Beis Meir and member of Vaad Hachinuch of Bais Yaakov mentioned how when the Ponovezher Rav, zt”l¸ made his plans to build his yeshiva, people told him that he would not be able to do it, since of 1000 who enter a yeshiva only 1 grows to greatness. The Rav answered that we have a guarantee that Torah will not be forgotten. In a regular generation, that can be accomplished with 1 of a thousand, but after the destruction of the Holocaust, where 1 million children were killed, it does not follow the usual path. The success is because Hashem promised that Torah will not be forgotten, and for that all 1000 who enter will become great in Torah.

“Rabbi Ehrenreich began building Bais Yaakov with a generation of lager Yidden, parents who escaped the inferno of Europe.” Rav Horowitz said. “And from these Yidden, he saw great hatzlachah. He was the bridge to the previous doros and connected them to one another. As the generations continued, he was able to change whatever was needed to adjust to the needs of each dor. It is amazing that years later, he still remembered the names of teachers, students and parents.”

Rabbi Naftoli Ehrenreich spoke of a time several years ago when his father had to undergo a procedure, and gave him instructions if he did not survive. “He said the levaya was to be at Bais Yaakov, and there should be no hespeidim because people would exaggerate. I asked my Rav, and he said we should have hespeidim, but I should be careful not to exaggerate. But would it be an exaggeration to say that he affected the lives of so many people? Would it be an exaggeration to say how much people loved him, as they told us time and again when we met them?”

He asked that everyone accept upon themselves one of the middos of his father as a zchus for him.

Harav Lipa Margolies, shlita, Rosh Yeshiva of Torah temimah, knew Rabbi Ehrenreich from his days when they were together in Bais Medrash Elyon and absorbed the Torah from Gedolim. He spoke about how Rabbi Ehrenreich had a big cheilek in establishing chinuch habanos as being part of the nitzchiyus of Klal Yisrael. He showed all that chinuch was essential for every Yiddishe neshamah.

“Rabbi Ehrenreich changed the landscape of America. He had the wisdom to choose the right teachers and the right person for each position,” he said.

Rabbi Nosson Scherman, shlita, spoke how he consulted with Rabbi Ehrenreich when he was a Rebbi and Menahel in Yeshiva Torah Vodaas of Flatbush (later Torah Temimah). “He was the smartest man in chinuch, and he was always right. He gave advice in which he understood the person, and said what he felt was right for him. He was unafraid to bring in people who were superior to him if that is what would help the Bais Yaakov succeed.”

Rabbi Menachem Frank, the current Menahel of Bais Yaakov of Boro Park mentioned how he visited Rabbi Ehrenreich in the hospital, and he told him that his heart was weak. “Your heart, which pumped yiras Shomayim into so many in Klal Yisrael, is weak?” I wondered.

Speaking of Rabbi Ehrenreich’s mehalech in chinuch, Rabbi Frank told a vort he heard from him. The Torah says that Yaakov Avinu loved Yosef because he was a ben zekunim. But wasn’t Binyomin his ben zekunim? The answer is that there are two ways to teach a student. One is to instruct the student with information, and Yosef was the bar chakim (as the Targum translates zekunim), the smart student who absorbed what he was taught. But there is another more important aspect, and that is venafsho keshurah benafsho, the connection between a teacher and student. “The student may not remember the lesson, but will certainly remember how she felt during the lesson, the connection she had with you. And that will last forever,” he told the teachers.

“Rabbi Ehrenreich stressed that when disciplining a student, it may only be done if the student will understand why she is being disciplined, and if she will understand that it is fair,” Rabbi Frank said. “Otherwise, it could not be done.”

Mr. Reuven Wolf, the President of Bais Yaakov of Boro Park told how Rabbi Ehrenreich sometimes took in a student who had substantial issues, saying, “If we don’t take her in, then who will?”

Rabbi Nachman Blasbalg, the Executive Director of Bais Yaakov of Boro Park told how a Gadol once said that the person who had the greatest impact on Yiddishkeit in the last century was Sara Schenirer, who introduced a generation of Jewish girls to the beauty of Yiddishkeit.

“A similar thing can be said about Rabbi Ehrenreich,” said Rabbi Blasbalg, “who led Bais Yaakov for four generation.”