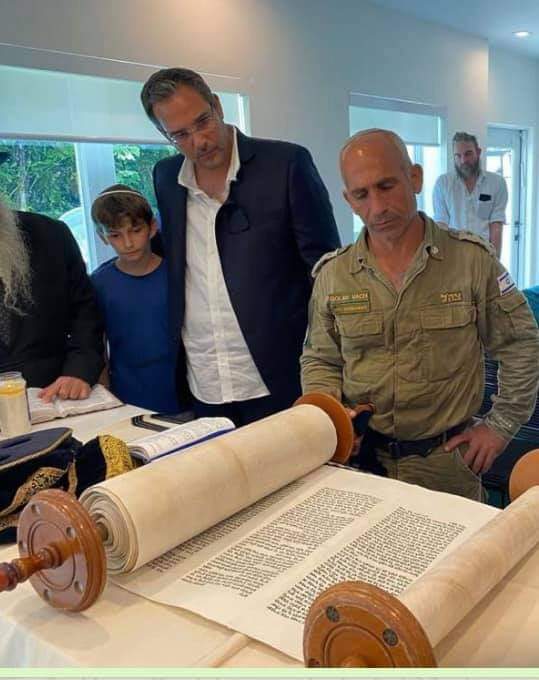 The Israeli officer who helped identify the body of Mrs. Itty Ainsworth, a”h, in the building collapse in Surfside, Fla., stood by the sefer Torah last Thursday as her granddaughter was named after her.

When IDF Col. Golan Vach paid a visit to the shivah of the Ainsworth family, his main goal was to assure them that based on the remains that his team had helped identify, Tzvi and Itty Ainsworth, z”l, had died on impact and had not suffered.

While he was there, however, he also partook in an uncommon event.

When he arrived, the family was preparing to mark the naming of a baby girl, who was born to Itty’s son Dovy and his wife Sheva, on the day before the building fell. Traditionally, baby girls are named with a special prayer following the Torah reading on Monday, Thursday or Shabbos. It is customary among Ashkenazic Jews to name children after loved ones who have passed on.

To thank Vach for his team’s efforts in locating and identifying the bodies of the parents of seven, he was called to the Torah for the Mi Shebeirach that announces the new baby’s name.

“It is with deep gratitude that I share the birth and naming of our daughter, Itta (Itty) Ainsworth, named after my mother, a’h,” the baby’s father wrote on his social media page. “My daughter should follow in my mother’s ways, connecting deeply with so many around the world in a positive, uplifting and spiritual way.

“We were honored to have the IDF [officer] responsible for my parents search efforts attend the Torah reading and naming ceremony,” he wrote. “Thank you Col. Golan Vach and the IDF, who have been critically helpful and comforting through this process. Col. Vach is a special soul we will never forget.”

“I was the gabbai, and at her father’s instruction, I gave the baby the name Itta after my late sister-in-law,” Tennenhaus told Chabad.org, referring to Itty’s full Jewish name. “The celebration is a reminder of how life goes on. How there is joy despite this tragedy.”

Vach, who led Israel’s National Rescue Unit, arrived in Miami following the collapse of the 12-story building in order to help with the desperate and heroic rescue mission. A week later, he was part of the team who found and identified Tzvi, 68, and Itty, 66.

On Sunday, the Israeli unit bade farewell to their fellow rescue workers before their return home. The group received an emotional sendoff with the mayor of Miami-Dade County, Daniella Levine Cava, thanking them for their help.

“Miami-Dade County and the town of Surfside will never, ever forget what you have done for us here,” she said.