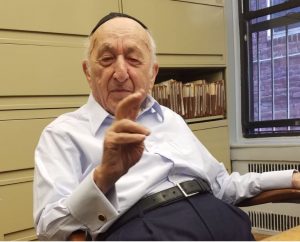 Klal Yisrael lost one of its most respected and generous philanthropists with the petirah of Reb Moshe Bistricer, z”l at the age of 101.

Reb Moshe was born in 1921 in Tetch, Czechoslovakia, a town in the Carpathian Mountains near the Romanian and Russian border. As a young child, he learned locally, and his parents hired a talmid chacham from Vilna, Rav Yosef, to learn with him privately with another few boys. This melamed broadened their knowledge, and he gained yedios in Tanach in addition to Gemara. Through this, he became familiar with the Litvishe derech halimud as well as that of the Gedolim of his region.

When Harav Shalom Leizer of Ratzfert visited the nearby city of Sighet, a young Moshe received a brachah that no gentile would ever have control over him. He was the only young man in the town who was not drafted, and throughout the harrowing days of WWII, he witnessed many miracles as he was saved time and again from the murderous hands of the Nazis.

After the war, he married Gita née Hillman, and took in her two surviving sisters into his home, in addition to his own sister, and helped marry them off. One these sisters-in-law married Reb Mordechai Brisk, and the other married Reb Berl Wurtzberger. His sister, Goldie, married Zigmund Eisenberger and lived in Montreal.

Reb Moshe earned some money in business, and hired someone in Kashau to learn with him for some 15 months. He later moved to Brussels, and in 1951 he received his papers to allow him to move to the United States.

Reb Moshe had an extremely close relationship with the Satmar Rebbe, zy”a, and would often receive calls in middle of the night to come over to the Rebbe to discuss things with him. In addition, he maintained a special connection with the Chuster rav, Zt”l.

Known as a big baal eitzah, many people would consult with him as to what to do with their business, and he was always ready to help with advice as well as financially in order to help people establish a means of supporting themselves and their families.

Reb Moshe gave generously to many yeshivos and mosdos. He dedicated the Satmar girls school in Williamsburg in memory of his parents, and hosted the first parlor meeting for Bais Medrash Govoha of Lakewood. His sons learned in Yeshivas Sfas Emes, Telshe, Mesivta Tiferes Yerushalayim, Mattersdorf, Mkor Chaim and Mir Yerushalayim, and he donated considerable amounts to support these yeshivos.

His son Avraham, z”l was niftar last year, and his daughter Chaya Reiss was niftar 9 years ago. He is survived by his sons Yitzchak Dovid and Yaakov Yosef, and many grandchildren and great-grandchildren who are bnei Torah.

The levayah was held Sunday morning in Shomrei Hadas. Kevurah will be in Eretz Yisrael on Har Hamenuchos.